Perhaps you’ve heard of the Trolley Problem. It’s a dilemma used to study moral thinking, and it goes something like this: If you see an out of control trolley bearing down on five innocent people, will you throw a switch to divert the train to a track where just one person is standing? Or, given the same dangerous runaway trolley, will you throw a large person off of a bridge in order to impede the trolley’s progress and save five lives? 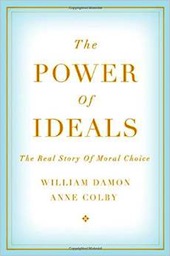 Most of us would say “yes” to the first question and “no” to the second, even though there is the same “body count” involved. Psychologists and neuroscientists like Jonathan Haidt and Joshua Greene have used hypothetical moral dilemmas like this one to study some of the unconscious processes that go into moral decision-making. Their research has led to some fascinating findings about how emotions and environmental cues work together to influence our moral choices.

But in a new book, The Power of Ideals: The Real Story of Moral Choice, renowned moral development experts William Damon and Anne Colby take aim at views that claim morality is largely driven by emotions or is the result of environmental influences beyond our control. Instead, the authors argue, morality is dependent on conscious, deliberate processes—like reflection, learning, and aspiration—and any model of moral development that discounts these is both flawed and disheartening.

“Moral psychologies that try only to demonstrate the limitations of everyday morality but ignore people’s authentic search for truth and goodness capture only the weakest elements in our nature,” they write.

According to Damon and Colby, we should not be looking to neuroscience to study morality, because findings from such studies are hard to interpret—in part because they are often conducted on limited populations, like college students, and focus on dilemmas, like the trolley problem, that one is unlikely to face in real life. Instead, they point to other research focused on real-life moral development, like that of Martin Hoffman at New York University. Hoffman has found that empathy in children develops in conjunction with increased “moral cognition”—for example, an understanding that what’s fair in one circumstance may not be fair in another. Damon and Colby believe that research like his illustrates how cognitions shape our emotional responses, which in turn can impact “unconscious” moral choices.

“Once [people] acquire new moral insights, even provisionally, these become background assumptions that influence their moral perceptions, their interpretations, and their choices without the need to deliberate about them anew in each instance,” they write.

There is much to be learned by studying historical moral exemplars, too, according to Damon and Colby, and their book focuses mostly on the lives of moral exemplars like Eleanor Roosevelt and Nelson Mandela. The authors identify three character traits that they believe particularly influence moral character and can be consciously cultivated: truthfulness, humility, and faith.

In their definition, truthfulness means more than being honest in everyday encounters; it also means using deep self-reflection and being open to new ideas and experiences. They point to the work of Albert Bandura, who found that people sometimes rationalize immoral behavior by using tactics like denial or distortion, dehumanizing victims, or assuming someone else is responsible to for doing the right thing. Deep self-reflection and openness, they argue, can be an antidote to these and other self-deception tactics, and helps moral exemplars to find deeper truths and to take moral action. This is all clearly demonstrated by the life of Nelson Mandela, who used his time in prison to reflect on larger truths and to find a way to forgive his tormentors.

The importance of truthfulness seems reasonably clear; but when Damon and Colby move on to articulate a definition of humility, they seem to get somewhat bogged down. Humility, they write, is hard to measure, as truly humble people would not claim to be humble. In addition, not all psychologists even agree that humility is a virtue worth pursuing, in part because it may involve self-deprecation. And certainly the moral exemplars noted in the book would not be considered “meek” or “subservient”—both words used synonymously with humility.

In the end, the authors define humility as “a sense of perspective on oneself and one’s abilities and achievement, a willingness to admit mistakes and limitations, open-mindedness and openness to new ideas, an appreciation of the many different kinds of contribution people from all backgrounds can make to the world and a relative absence of self-seeking as a driving motive.” To which I thought: Huh? This doesn’t sound like humility to me—more like a combo platter of other, worthy psychological constructs.

I wish they’d bypassed this all and gotten straight to the point: moral exemplars aren’t interested in self-aggrandizement. In fact, they often don’t see themselves as special. Their humbleness tends to separate them from the fanatics of the world—those who might also believe that they’re in touch with “truth,” but whom none of us would consider moral exemplars.

And then there’s the unfortunate use of the word “faith.” Damon and Colby try to back off from its religious undertones by writing things like, “Faith means believing in something” and by arguing that even scientists have faith of a sort. But this clarifies little and obscures what the authors are really getting at—that many moral exemplars are guided by their personal belief in a moral universe (often, but not always, connected to religious beliefs) and have a strong sense of purpose in their lives that helps them transcend adversity. Why use the word “faith” at all?

In fact, this whole section of the book seemed ungrounded to me. Certainly, there was little reference to science. Yet, Damon and Colby are excellent writers and giants in the field of moral development. For these reasons alone the book is well worth reading. Stories of moral exemplars and what their lives have to tell us are always uplifting and inspiring.

And even with my quibbles, the book provides ample food for thought—most notably, the importance of self-reflection and role-modeling in encouraging future moral exemplars. If we want our kids to know right from wrong, we must show them that truthfulness is a virtue worth cultivating, that learning and personal growth are more important than achievement, that doing for others rather than self-aggrandizement leads to long term happiness, and that transcending adversity is easier if one lives a principled life.

Fortunately, each of these pathways to moral character can be approached consciously—without having to imagine throwing anyone off of a bridge.