There came a moment in high school when I had all but lost hope of getting into college, and I turned to three friends: one close, one new, and an acquaintance—an eclectic triangle of support. But our relationships change as we age. These days, when stress hits, I’m more likely to pour my heart out one-on-one, to my partner or closest friend. 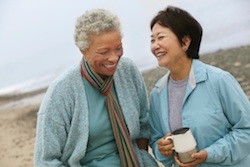 For many of us, becoming an adult involves a narrowing and deepening of our supportive relationships, as partying with the gang gives way to coffee dates and gym excursions. And according to a new study, this friendship pattern—of focusing on quantity when we’re younger and on quality as we enter middle age—may have health benefits.

Psychologists know that social connection is good for our health: Elderly people with lots of friends live longer, and social capital may protect us against heart attacks and cognitive decline, for example. But this new study provides a deeper understanding of the link between relation-ships and health, how it changes across the lifespan, and how that might impact our social choices.

Researchers at the University of North Carolina, Chapel Hill, and Renmin University analyzed surveys of nearly 15,000 young adults (mostly in their teens and 20s), middle-aged adults, and older adults (ages 50 and older), who provided information about the quality and quantity of their relationships. Quality was measured by how much social support and social strain they experienced from their family, friends, spouse, and schoolmates: how much they felt cared for, helped, and understood rather than criticized, annoyed, and let down. The quantity measure reflected whether they were in a romantic relationship, how often they saw friends and family, and whether they participated in their church or community.

Then, anywhere from four to 15 years later, researchers checked up on the participants’ health—and this is where the patterns started to emerge. For younger and older adults, the quantity of their relationships mattered: Being more socially integrated seemed to protect adolescents from obesity, young adults (of all ages) from damaging inflammation, and seniors from inflammation and high blood pressure—all biological markers of stress, and risk factors for disease and earlier death.

“Finding [that social connections are] so important early in life is really critical, because it means that you can intervene. You can do something,” says study coauthor Kathleen Harris, a professor at the University of North Carolina at Chapel Hill. “Schools can promote activities for students who typically don’t get involved” and “doctors, when they’re doing an annual checkup, ought to be asking questions about the social relationships of their patients,” she says.

But unlike the young and old, middle-aged adults who had had many social connections weren’t any healthier than their more isolated peers. Instead, what mattered for them was quality: Mid-lifers who had had the most social support were slightly less likely to be obese, while those with the most social strain suffered from more obesity and inflammation. Some of these links were present in younger and older adults, but not as consistently as in the middle-aged group.

What accounts for this pattern? According to the researchers, our social networks tend to be large during adulthood—from a new spouse and family to work colleagues to fellow community members; in effect, we don’t have to worry too much about quantity during this time. Instead, what makes a difference is how much stress these relationships bring us—and relationships in mid-life can certainly be fraught with tension. Meanwhile, bereaved seniors and awkward adolescents are the ones at risk for social isolation.

Another paper published in March 2015 found a similar pattern: The quantity of relationships in one’s 20s and the quality in one’s 30s predicted higher well-being and less depression and anxiety decades later (although this particular study found no health effects). Its lead author, Cheryl Carmichael, believes that young people’s relationships help them learn social skills and figure out their place in the world—and here, presumably, more is better. According to Carmichael, busy 30-somethings with lots and lots of relationships might just be spreading themselves too thin.

She raises an important point: There’s only so much time in the day. Should we spend our precious moments forging new social connections or strengthening the ones we already have? The answer may depend on where we are in life’s journey—but at every age, connection matters.