When it comes to hanging out with our friends, should we aim for quality or quantity time spent together?

That depends on how old you are, suggests a new longitudinal study published in Psychology and Aging.

The study began in the 1970s, when researchers at the University of Rochester recruited 222 undergraduates to answer questions about both the frequency and duration of social contact, as well the intimacy and pleasantness of the interactions. Researchers checked in with most of the original participants again in 1985, when they were hitting their 30s. More than two decades after that, researchers collected data on the mental health and social relations of 133 members of the original group, who now ranged in age from 48 to 52 years old. 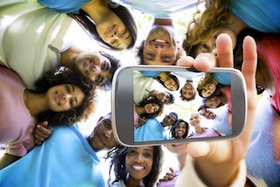 The researchers found that we appear to have different needs at different ages, in laying the groundwork for future well-being. Having a greater quantity of social interactions in one’s 20s predicted better social connections and better mental health outcomes—less depression and anxiety, and higher overall wellbeing—in middle age. But the formula was different as participants entered their 30s: at that point, it seems, it was more beneficial to go deep and cultivate higher quality friendships.

In other words, the best outcomes in your 50s were associated with having had lots of social activity in your undergraduate years, and then focusing on some good, close friends as you started to reach your 30s.

According to the study’s lead author, Cheryl Carmichael, at Brooklyn College, these results point to the importance of early social development. “Whether you have tons of friends or a handful of friends, being connected to those people is good for you,” she says.  “If you can have more social experience and be socially active in your 20s, even if it’s just the same few people or a big group of people, those social experiences provide a big benefit.”

Why different aspects of friendship may be more important at one point in time than another may be due to how developmental goals change with age, says Carmichael. When you’re younger, having lots of different social contacts may help you to learn basic social skills and to better understand your place in a social world. But, as you enter your 30s, your goals for intimacy change, and this seems to call for less quantity and more quality social interaction.

“If our goals are more focused on emotional closeness, it makes sense that quality matters more,” she says.

Carmichael notes that frequent social activity at age 20 didn’t necessarily lead to high quality relationships in one’s 30s, though—these factors were not related in her analyses. Additionally, while friendship quality was important in one’s 30s, more frequent social activity at this age had a slightly negative impact on health outcomes later in life, though the effect was marginal.

“If you are spreading yourself too thin, it may possibly interfere with your ability to have those high-quality, intimate, emotionally-satisfying relationships,” Carmichael says.

Carmichael’s study found no connection between quantity and quality relationship factors and later romantic partnerships in the 50 year olds, though—a finding not reported in the published paper. Carmichael speculates that this may be due to a variety of other things that can influence the formation of romantic relationships, including the social history of one’s partner, she says.

In addition, her study didn’t find a correlation between early relationships and later physical health, which surprised her. She wonders if the connection might become apparent as her subjects get older and have more age-related health problems.

“Social connection, social integration, emotional wellbeing—all the things that are predicted by age 20 social activity and age 30 social closeness—have been predictive of long-term health in other people’s work,” she says. “It would be really cool to see what happens with these folks later on as they age.”

So, does friendship quality not matter at all in one’s 20s? Carmichael won’t go that far. While having high quality relationships at age 20 didn’t predict well-being in one’s 50s, it was positively correlated, and it seems to have an influence on friendship quality in one’s 30’s, which is clearly important.

“So, if you can find a way to socialize in your 20s and focus in on the most meaningful relationships by the time you get to your 30s, our data suggests that that’s most positive route.”