Ever wonder why some people have more friends than others? Why some run in large and complex social circles while others have a small group of acquaintances? There are no doubt a variety of factors that influence the extent of our social networks. New research shows, however, that one factor we may not have considered before is right inside our head.

In a paper published recently in Nature Neuroscience, researchers showed that the number of friends we have could be predicted by the size of our amygdala—a small, almond-shaped region located deep inside our brains. 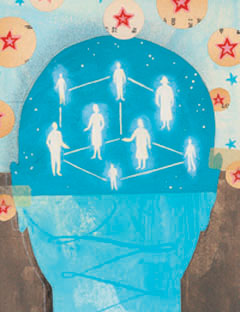 As I have blogged about before, the amygdala is a major player in our emotional reactions. Because of this, it makes sense that the amygdala would be at the center of a brain network important for socializing. This network helps us recognize whether somebody is a stranger or an acquaintance, a friend or a foe—all important factors in maintaining social relations.

Importantly, amygdala volume was not linked to a person’s life satisfaction or the amount of social support they felt in general, suggesting that it’s not that the bigger the amygdala, the happier a person is. Rather, amygdala size was specifically related to the makeup of one’s social network.

Researchers have known for some time that non-human primates who live and operate in larger social groups tend to have greater amygdala volume relative to those primates that don’t, even after controlling for overall body and brain size. This new research shows that, even within the same species, the bigger the amygdala, the larger and more complex one’s social networks tend to be.

This finding is exciting because it opens a window into exploring how abnormalities in the amygdala may impair social functioning or contribute to certain psychiatric disorders. In short, it sets the stage to further our understanding of how particular brain networks guide our social interactions.

Of course, one big unanswered question centers around the direction of this amygdala-social network relation. Are some people born with a bigger amygdala that helps them to forge more complex social networks, or does amygdala size increase as we gain more friends? The jury is still out on this one, but given our knowledge of evolutionary influences on the brain and the ever increasing evidence that experience can change the brain—even later in life—it’s probably some of both.

Thank you Sian, this is fascinating and exciting stuff. Do we know how this might be related to the role of the amygdala in learning and memory formation? And beyond that how it might be related to events, circumstances and conditions such as stress and trauma that change the size of the amygdala? To what degree can we consider the growth of social networks and social skills as “learning”, and to what degree might such networks and skills result in stress-free and healthy lives?

Apparently the amygdala can be damaged by
drinking alcohol to excess. So if all this is true
then the sort practical application could be that
if one of your friends rapidly declines their social
network then it could there’s an underlying cause
like they are abusing alcohol and you hadn’t
realise it.