When my mother died, the first thing I did was call my two best friends. Like good friends will, they dropped everything and came to my rescue. Having them there made all the difference in getting through a very difficult period of my life.

Researchers haven’t always emphasized this kind of social support as a factor in individual resilience—that is, the ability to recover from hardship and move forward in a positive, adaptive way. Instead, they have placed a high premium on studying personal qualities, often relegating social context to a lesser role. 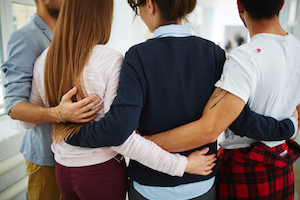 For example, studies have found that people who are happier, have a strong purpose in life, or higher levels of self-efficacy—the belief that they have control over their situation—seem to have an easier time recovering after disaster. Some of these personality factors have been shown to be protective, even for those who suffer from economic hardship, and can lead to better health outcomes, a reduced risk of suicide, and a better recovery after the loss of a spouse or loved one.

Still, the research surrounding resiliency is complex and varied. In some cases, resiliency may look a bit different depending on the type of hardship being faced, like the loss of a spouse versus the long-term effects of childhood abuse. Certain protective factors that may help one group of people don’t necessarily help another. And some studies show that resiliency is not a stable trait but fluctuates over time, suggesting that it is subject to developmental or environmental changes, not personal attributes alone.

Lost in the mix of resiliency research is the importance of social circumstances. How resilient we are may have as much or more to do with our social milieu and circle of support—our communities, our institutions, our cultural expectations—as it does with our personal strengths.

As resiliency researcher Elliot Friedman says, “The availability of social support in all its forms—instrumental support, emotional support, support with how you think about things—they all matter and help us in facing challenge.”

Though we may think it’s easier to change ourselves when it comes to facing adversity—to pick ourselves up by our bootstraps, as they say—research suggests that positive relationships and supportive environments have an important role to play.

Having good social relationships is clearly a winning strategy in life, tied to greater psychological and physical well-being. Thus, it’s not surprising that social relationships also matter when it comes to resiliency, in part because they help us feel less stress when we are suffering.

The reason may be that good social relationships seem to help us tamp down stress reactions, even when we just recall those relationships. In one study, wives who felt strongly in synch with their spouses felt less anticipatory reactivity toward a mild electric shock. And caring touch from a health care worker reduced pain in accident victims up to six months later, supporting the importance of empathic behaviors in patient care.

Supportive relationships also help those suffering from childhood abuse—especially “supportive relationships that foster attachment, guidance, reliable alliance, social integration, and reassurance of worth.” One study found that those children who’d suffered psychiatric distress—enough to be hospitalized—bounced back after adolescence to become better adjusted adults if they’d had positive social relationships and felt a sense of relatedness toward others.

As the American Psychological Association wrote in its resilience report: “Many studies show that the primary factor in resilience is having caring and supportive relationships within and outside the family. Relationships that create love and trust, provide role models and offer encouragement and reassurance, help bolster a person’s resilience.”

Perhaps that’s why when we are in trouble, we naturally look to our social networks for help—whether they offer emotional support or simply a helping hand.

“Having friends you can talk to and share your concerns with, maybe having them help you get a perspective on things—that’s where social ties can be useful,” says Friedman.

To some extent, resiliency depends on culture

What is important for resiliency in one culture may be less important in another culture.

For example, research has shown that in more collectivist cultures—where the well-being of one’s group is valued more than the individual’s—social support and being flexible may be more protective in overcoming setbacks than self-efficacy. Individualistic Americans, on the other hand, seem to need that combination of independence and effectiveness, according to Friedman.

In addition, some personal attributes supporting resiliency in one culture may do harm in another. In one study, researchers found that having high levels of positive emotion—if coupled with low social support—resulted in worse health for Japanese participants. Also, while positive emotion may be tied to resilience in the U.S., it’s not necessarily so in other cultures. In fact, a balance of positive and negative emotion can be more conducive to getting through hardship.

Hostile cultural contexts can also affect resiliency. For example, one study found that, for gay men, internalized homophobia and the stigma of being gay hurt their resiliency, making them less likely to seek needed medical care. But other studies have found that, with positive social support, some discrimination stressors can be overcome, leading to better health outcomes.

These and other studies suggest that, when considering resiliency, cultural factors are important. Not only may personal attributes be less important in certain contexts, they may actually backfire—perhaps making people believe getting back on their feet is all up to them.

In countries where social supports—such as universal free health care and paid parental leave—are provided by the government, studies find that people are happier and healthier, which in turn seems to help them bounce back from challenges and disasters. When these supports are missing, says the research, people suffer psychologically.

Imagine how this might play out: Suppose you have to leave work to care for an ill parent, and you happen to live in a place where paid family leave is a given. You may still be challenged emotionally, but it won’t be compounded by financial stress or the fear of being fired for taking time off. This is especially true for new parents. Not only does paid leave result in better health for mothers and children, it helps mothers to return to work sooner.

As a report from the World Bank suggests, social support networks are critical to resiliency, especially for the poor and vulnerable. In areas where there is great wealth inequality, people suffer more ill health effects to begin with.

Social safety nets can also provide the proverbial ounce of prevention. One study found that resiliency is tied to fewer adverse events in one’s life, suggesting that prevention of adversity—perhaps through social programs like parent coaching or universal health care—may be key to increasing resiliency. Research has shown that states embracing policies aimed at improving the social welfare—for example, through tax credits and better health care—had smaller percentages of their citizens reporting disabilities than states who didn’t embrace these policies.

Many researchers suggest that living a more altruistic life or living life with purpose helps us be more resilient when disaster hits. But could the root of this benefit be tied with the values that come with altruism and purpose?

This is hard to tease out, as many researchers use measures of resiliency that are multi-faceted—for example, bundling conscientiousness, vitality, and relationships into a package of resiliency traits. This makes it difficult to know which factors are most salient or how they interact.

Yet we see evidence from other research that altruism is tied to social relationships, which aids in resilience. Practicing gratitude also strengthens relationships and social support networks, which aids in reducing stress and depression. Even finding purpose—which one could imagine doesn’t necessarily involve building social networks—is often fostered in research studies through in-depth conversations with a caring adult.

“We’re finding that a good route to feelings of purpose and meaning—which we tend to think of as good sources of resilience—comes from being out in the world, being engaged with meaningful activities that are doing good for other people and that are contributing,” says Friedman. “Engaging in meaningful activities definitely has a large social component at a very high level.”

In addition, individuals suffering a setback are frequently encouraged to go to a therapist, join a support group, or get involved in volunteering. All of these activities have at their root the opportunity for deeper or wider social and emotional connection. Interestingly, research suggests that the relationship between a patient and a therapist may be the most critical ingredient in therapeutic success—more important than therapeutic techniques, for example.

Even religious belief—sometimes seen as helpful for resiliency—may be, for many, an opportunity to deepen social connections, which could explain its potency. One need only think of church members gathering together to help out someone in need within their congregation to see how this might play out.

So, why does this matter? If we don’t understand the relevance of social context in resiliency, we may end up setting ourselves up for failure. If resiliency doesn’t simply mean focusing on our personal strengths and overcoming the odds, we will create more ways for people to strengthen their support systems—and for governments to enact policies that help prevent unnecessary adversity in the first place.

In other words, when you are going through a hard time, turn to the people around you. It takes a village to help each of its members to bounce back from disaster.