If Congress passes the American Health Care Act (AHCA), 24 million fewer Americans will have health care within a decade, according to a recent report from the Congressional Budget Office. Obviously, this would mean a lot of people will have less preventative care and affordable treatment for disease, and so they’ll be more vulnerable to the impact of injury and illness. 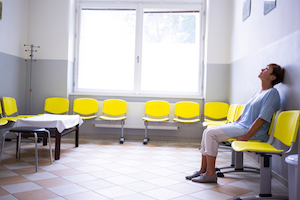 But what about people who are less likely to use health care—younger and healthier Americans? Do they really have much to lose if the AHCA is passed? It turns out that the answer may be yes.

In a recent study, public policy researchers at California State University, Sacramento, analyzed surveys from over 300,000 participants conducted over the phone by the Centers for Disease Control and Prevention. The surveys asked about demographic information—such as age, race, socioeconomic status, marital status, and education level—as well as participants’ health behaviors, health concerns, and whether or not they had health care coverage. They also answered this question: “In general, how satisfied are you with your life—very satisfied, satisfied, dissatisfied, or very dissatisfied?’’

In their analyses, the researchers found that people with health problems had lower life satisfaction than those without health problems—a finding that confirms other research on the connection between health and happiness. But they also found that those who had no health care coverage scored 16 percentage points lower on life satisfaction than those with health coverage—a significant difference in happiness.

Still, there are many factors that can affect happiness—so the researchers analyzed the data more carefully. They considered how demographics might shape well-being—like income or marital status—as well as factors like whether or not participants had a physician, smoked, or drank. Even accounting for these variables and using several analytic tools to parse the data, they still found that having health care coverage predicted higher satisfaction with life.

“People can be similar in lots of ways,” says Edward Lascher, public policy professor at California State University, Sacramento, and coauthor of the study. “But if they don’t have health insurance, they’re more likely to express that they’re unhappy with life, which is pretty notable.”

Lascher believes that people may underestimate how important health care coverage is to their mental health. He points to research showing that people can’t always accurately anticipate what will help or hurt their happiness—and that the life circumstances people think will matter to their happiness sometimes don’t. For example, he says, income does have an effect on happiness; but it levels off at a certain point, so that the happiness difference between making $100,000 and a million per year is trivial or non-existent.

“But health care stays relevant,” says Lascher. “It’s not as important as poverty or having a life partner, but it’s important to happiness.”

Though he and his colleagues are not sure exactly why that would be, they suspect that it has something to do with uncertainty. He points to studies of happiness that show people have trouble adapting to uncertain situations, because they cause anxiety and stress. Perhaps not having health care coverage—even if you don’t anticipate needing it—leaves you vulnerable to worry.

“Research suggests people can accommodate to a lot of stuff,” he says. “They can break their arm, and they recover happiness pretty quickly. But nagging fear is really hard to accommodate.”

His findings also seem to align with other studies looking at the effects of reduced welfare programs. For example, a recent study found that the unique disparity in the United States between parent and non-parent happiness levels (where parents report significantly less happiness than non-parents) is primarily attributable to a lack of supportive programs for working parents, like paid parental leave and subsidized childcare. In countries where these programs are provided by the government, parents and non-parents are equally happy, likely due to less stress and worry for parents.

Whatever the reasons, it’s clear that lacking health care coverage not only reduces our chances of staying healthy—it may also reduce our overall well-being. Perhaps our government needs to take a closer look at these hidden costs before pulling the plug on the Affordable Care Act, says Lascher.

“People aren’t necessarily making the distinction between the effects of losing access to health care and what it does to people psychologically to not have coverage,” he says. “I don’t think these issues are being considered adequately.”