Having a child is supposed to be a happy occasion—but it’s happier for some than others.

Research suggests that it’s fairly common for happiness to take a nosedive for working American parents after their children are born. And when researchers compared parent happiness to non-parent happiness in 22 countries, the United States came in dead last: We had by far the largest gap in happiness levels.

Though having children can be a source of life satisfaction over time, the financial, physical, and work stressors involved in raising a child take a toll on parental well-being, especially for the most vulnerable, like single parents and the poor. Especially, it seems, in the United States.

But, according to two new studies, it doesn’t have to be like that. There are work policies in place around the world that research says can work for parents and families. 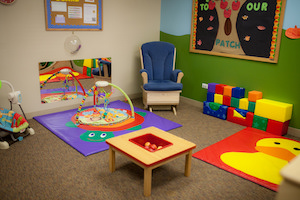 Researcher Jennifer Glass and her colleagues—the same ones who studied happiness levels in 22 countries—found minimal or non-existent differences in happiness between parents and non-parents in all countries except for the United States.

To understand what accounted for these findings, the researchers looked at many factors—like the parents’ age, race, number of children, economic status, and work hours, as well as each country’s level of income inequality, percentage of immigrant workers, and poverty levels—to see if these could explain the lower happiness in parents. None could.

Glass and her colleagues suspected that the problem lay elsewhere, and that maybe governmental policies that supported parents in the workplace could be impacting the happiness gap.

To test that, they measured how generous parental work policies were in each country, looking at programs like paid maternity leave, paid leave for parents during the first year of a child’s life, paid sick or vacation leave, and government subsidized childcare—many of which are government-mandated in other countries, but not in the United States. If a country offered paid parental leave, for example, it would receive one point; but it would receive more points if the paid leaves were longer.

After analyzing the results, the findings were clear: The more government-required work policies in place, the less of a gap there was in parent/non-parent happiness in that country. This did not completely shock Glass.

Glass and her colleagues noted that certain programs seem particularly successful in reducing the happiness gap: paid sick and vacation leave, and high-quality, subsidized childcare programs. This makes sense, since being able to leave work to care for a sick child and affordable childcare would reduce financial stress for parents. Still, the most effective programs seemed to be ones that combined paid maternity leave, paid vacation and sick leave, and work flexibility.

“The nations that combine these policies see a much bigger impact on parental happiness,” says Glass.

Interestingly, when better childcare programs were in place (which parents tend to use in the early years of their children’s lives), parents with older children were still happier, suggesting that something about those early programs created lasting effects, perhaps by decreasing future economic hardship or career setbacks. In addition, the programs did not seem to affect poor or single parents more than other parents; they corresponded to greater happiness for all parents, regardless of income.

“It’s not a zero-sum game. These are policies that benefit everyone’s emotional well-being; they just benefit parents more,” says Glass.

How definitive are these findings? It’s hard to know, since the underlying causes of happiness differences can be multi-faceted. However, Glass says the findings make sense to sociologists who understand how structural factors in society can influence individuals. And they fit in with what prior research has shown about how economic policies affect families in the United States and how children suffer when their parents are financially stressed.

“We’ve known for a long time that the U.S. is an extreme outlier for the way in which it valorizes parenthood, but makes it extremely difficult for parents to actually provide a decent standard of living for their children,” says Glass. She believes that Americans should be looking more closely at some of the programs that have helped European countries to reduce the happiness gap for parents. 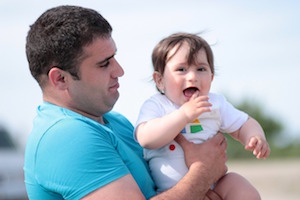 Though better policies may ease the burden on parents, other research suggests that they’re only one part of the solution. Another recently published study illustrates that even when helpful policies are in place, they may not benefit everyone equally.

Researchers at the University of North Dakota, Grand Forks, looked at how flexible work policies related to life satisfaction in American dual-working parents (where both parents are employed full-time) by interviewing 211 fathers and 284 mothers. In addition to reporting demographic information, participants were questioned about their workplaces’ flexible work policies, their actual use of these programs, and their life satisfaction.

This surprised co-author of the study Krista Lynn Minnotte. “We were struck by these findings,” she says. “Initially, we had anticipated that anyone using flexible scheduling options would benefit from doing so.”

Why did men not benefit? Minnotte and her colleagues speculate that mothers may be expected to fulfill childcare and household responsibilities more than fathers, even if both parties are working outside the home; so flex hours are more helpful to them.

However, this finding may also reflect a lack of support for men in the workplace taking time out from work for childcare. At least some research suggests that men are more worried than women are about the ramifications to their careers of taking time off, and for good reason: It could affect their future earning potential.

Whatever the case, both Minnotte and Glass believe that men pay a social price for caring for children that mothers don’t. The way to combat that trend is to normalize the role of men in childcare and provide incentives for men to take the leaves they are offered, as they do in Norway and Sweden.

“When they increased the financial compensation for leave, it had a huge influence on how willing fathers were to take the leave,” Glass says. Unfortunately, she says, this feels “un-American” to many people, meaning that such policies face formidable cultural and political obstacles to implementation. 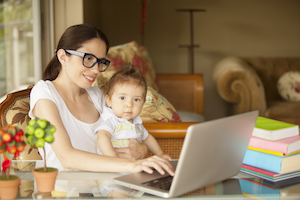 Where do we go from here? It’s crucial to remember, says Glass, that workplace policies supporting families don’t just improve parental well-being: They are quite likely to affect children as well.

“It’s pretty much a no-brainer: Things that are going to make parents happy are going to influence a child’s health,” she says.

Glass argues that governments should be finding ways to support working parents through a combination of work leave policies and government-subsidized childcare, which includes flexible work schedules for working parents.

Yet many Americans seem resistant to these kinds of policies. Glass thinks that working parents themselves endorse them, but because they make up a smaller and smaller part of the population, they have less political clout. Also, due to cultural attitudes around race, immigration, and religious differences, too many American parents who aren’t struggling don’t think about advocating for those who are.

“People in the U.S. are much more reluctant to be taxed to help other people’s children than in many European countries, where they have more a sense of community and of a collective, shared future,” she says.

Minnotte agrees that the reasons for resisting social support programs in the United States are probably multi-faceted; but it’s clear that current work policies are very uneven—with certain workplaces offering generous leaves and others offering nothing at all—which is problematic.

“While we do have FMLA [Family and Medical Leave Act], it is unpaid leave that only a little over half of workers have access to,” says Minnotte. “This leaves it up to individual families to pick up the pieces and try to figure things out for themselves. It is tough!”

Research like Glass’s and Minnotte’s implies that Americans need to look more closely at the impacts of our work policies on parent life. Instead of plying parents with more how-to books, perhaps we should be working to make sure that all parents have the supports they need to thrive. And we may need to encourage fathers to get more involved in childcare by ameliorating the social or financial costs they experience when doing so.

Until we do, American parents and their children are bound to suffer, and that shapes all of our futures.

“We can ignore these trends and not care about the workforce of the future, or we can look at the experiences of European countries and see that there is a way to build a 21st century competitive workforce,” says Glass. “It doesn’t start with starving parents and making parenting extremely difficult.”

She recommends that parents start agitating for what they need.

“When people vote for the things that they think are important and will benefit them, then they’ll get them,” she says. “What I think holds back Americans now is their limited sense of the possible.”