People are lining up to be vaccinated against COVID-19—and they’re looking forward to resuming a normal life. 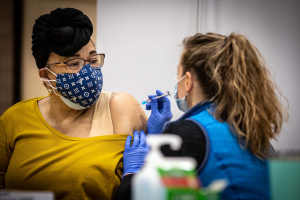 However, not everyone is on board with vaccination. Though the number of vaccine hesitaters may be diminishing in the United States, it’s still relatively high compared to many other countries.

Vaccine hesitaters are not a monolith, but a diverse group with many reasons for avoiding vaccination. Some are concerned the COVID-19 vaccines aren’t safe or that potential side effects aren’t worth the risk of taking them. Others think the risk of getting COVID themselves is low; so, why bother? Still others have a resistance to government intervention and see taking the vaccine as capitulation to government overreach and a bane to personal freedoms. A small number are simply opposed to all vaccines.

The fact that people have varying reasons for not getting vaccinated can make it more difficult to get everyone one board, and that affects us all. Without sufficient numbers of people becoming vaccinated, we won’t reach “herd immunity.” That means the pandemic could continue indefinitely.

So, how can we help people overcome their resistance to being vaccinated? While science has no sure-fire answer to this dilemma, research suggests that some approaches may be better than others and could be worth trying—especially if people are on the fence rather than anti-vaccines, in general. Here is some of what the science says about approaching someone who is vaccine-hesitant.

1. Listen to their concerns—and empathize

While our first inclination to vaccine resistors may be to chastise them or come at them with an arsenal of facts, that’s likely to be ineffective. Instead, we should first listen to people’s concerns without judgment, so we can better address their needs, says Heidi Larson, founding director of the Vaccine Confidence Project at the London School of Hygiene and Tropical Medicine.

“If you make a lot of assumptions about what people are thinking, then people get annoyed, because your intervention is not relevant to them,” she says. “It’s important to really listen and understand, because maybe somebody has a very reasonable concern and just needs some clear information.”

Research in health care settings suggests that showing empathy can help encourage vaccine adherence, because it increases trust in the messenger. In Larson’s recent book, Stuck: Why Vaccine Rumors Start and Why They Won’t Go Away, she advises a more understanding view around vaccine hesitancy. Approach people with respect and dignity, even if you disagree with them.

To express empathy, you might say something like this: “It’s understandable that you would have questions about the vaccines. There’s a lot of conflicting information out there. What have you heard?” Making people feel like their concerns matter and are not being dismissed can lower their defenses and help them to listen better themselves.

2. Supply clear information relevant to people’s concerns…but not too much

In some cases, it may help to provide information addressing someone’s concerns from an unbiased resource, such as the Centers for Disease Control or the World Health Organization. Though not everyone will be open to that, those who are may appreciate the straightforward information.

Alternatively, if you feel your friend or family member trusts you to give them the straight story, you may want to summarize findings rather than provide detailed studies. For example, a relative of mine recently expressed concern about the vaccine being “fast-tracked” without sufficient testing of its safety. For her, it made sense to explain why the vaccines were developed so quickly (because of prior work creating vaccines for similar viruses and international cooperation) as well as how safe they are—something many people may not know.

However, overwhelming them with too much information could backfire. When presented with multiple counterarguments to their strongly held views, people tend to take on an adversarial stance, spending energy poking holes in your thesis, says researcher Adam Grant. It’s probably better to point someone to one strong argument rather than a slew of scientific studies.

Still, people tend to pay attention to information that supports their preconceived notions and ignore contrary information (what researchers call confirmation bias) or give negative news more credence than good news (negativity bias). While helping people understand how these biases work can sometimes make them more open to changing their views, this might be hard to get across in an everyday conversation about vaccines. Instead, it might help to simply acknowledge how hard it is to sort through new information when dealing with fear and anxiety, while still reinforcing the importance of vaccines.

“This is a dynamic and changing space, and we don’t have all the answers; so, we need to be understanding about the uncertainty people feel,” says Larson. “At the same time, we need to remind people COVID is not over, and if you’re vaccinated, you’re clearly in a better place than if you’re not.”

When faced with disaster, many of us will tend to cling to our identity groups for a sense of safety and support. Unfortunately, that can lead to “groupthink,” where people discredit information from someone outside of their group—even if it’s true—helping to spread vaccine hesitancy within groups.

In the United States, larger percentages of Republicans, white evangelical Christians, and people of color remain unvaccinated, in part because of group distrust of government or science—or because they lack concern about the virulence of COVID-19. If you are not a member of one of these groups, and you’re trying to convince people who are to take the vaccine, you might be doing them a disservice trying to convey pro-vaccine messages.

For example, one recent study found that Republicans who were hesitant about vaccinations were more willing to change their minds if they heard pro-vaccine messaging from Republican figures—and were less willing if the message came from Democrats. Large-scale surveys of Black and Latino communities suggest it may be better to point people of color to pro-vaccine messengers within their social-identity groups—a trusted doctor, pastor, or public figure within that community, who likely understands their worldview and has some clout.

Larson mentions that, in Britain, Bangladeshi chefs and restaurant owners got involved in putting out pro-vaccine messages to increase vaccination rates in their community. In the U.S., group influencers, including African American barbers and health professionals, have been encouraging Black people to get vaccinated. Even Donald Trump has become a pro-vaccine messenger. Pointing to influential others may help people overcome their resistance, if they relate to the messenger.

Some of the unvaccinated are afraid or balk at being told what to do, but appealing to their care for others may help overcome their hesitancy.

In a study by Larson and colleagues, researchers interviewed 8,000 people in the U.S. and U.K. to better understand their views on the vaccine. While the study focused primarily on the influence of misinformation on vaccination rates—and, sadly, showed that it increased hesitancy—the researchers also found that people were 6% more willing to get vaccinated if they were told it protected others in addition to protecting themselves. This mirrored earlier studies that found considering others’ safety increased willingness to wear masks and take health precautions.

Appealing to our shared vulnerability may also be important, says Larson, as a continuing pandemic thwarts goals everyone shares—like reopening businesses and strengthening our weakened economy. If we can tie mass vaccination into people’s sense of unity and common purpose, it could make a dent in vaccine resistance.

“One of the things about COVID vaccines, which is very different from childhood vaccines, is that it matters to everybody,” says Larson. “It’s not just about you. We’ve got to do this together.”

5. If nothing works, set boundaries

Given the importance of getting everyone vaccinated, it’s not surprising that people find it hard to talk to someone who resists. Even following Larson’s and others’ advice, you may not be able to move someone you care about, and that could cause bad feelings between you.

For example, John (an alias) got vaccinated as soon as he was eligible, but members of his extended family refused the vaccine. When many of them became sick and his vaccine-resistant uncle died from COVID-19, John felt both grief and fury at his family.

“I flat-out refused to attend my uncle’s wake and service because there would be so many unvaccinated, mask-resisting people flying there from all over the country,” he says.

While his stance may not have moved any of his relatives to change their minds, it was self-protective, and that’s important, too, says Larson. When you’re in a highly emotional state, that may not be the best time to talk to someone about their hesitancy in an open, neutral way, or to present them with facts and figures.

Also, if unvaccinated friends and family ask you to be in their company, for whatever reason, you should feel perfectly fine refusing, says Larson.

“I wouldn’t be shy about saying, ‘It’s your choice about vaccinating, but for me, I don’t want to take the risk,’” she says.

On the other hand, she says, we can take hope in the fact that people may change their minds on their own. As unvaccinated people face more restrictions—or find friends and relatives leaving them out of activities—that may be more impactful than any particular message you can give them.

“We’re going to get to a point where there will be things that people can’t do if they’re not vaccinated,” she says. “People may get so frustrated they’ll just want to go around whatever is preventing them from getting vaccinated—without worrying about explanations.”