Where there is communication, there is influence—and today we’re communicating constantly. We have access to more information than ever before, and would-be influencers have more and more access to us.

But how do people influence others, for good or for ill? That’s the subject of the new book The Influential Mind: What the Brain Reveals About Our Power to Change Others by neuroscientist Tali Sharot. She argues that we’re full of misconceptions about how minds get changed, which means that we often fail to influence others—our kids, our students, our coworkers, our patients, and our loved ones.

“Many of our instincts about influence…are ineffective because they are incompatible with how the mind and brain operate,” she writes.

How influence works in the brain 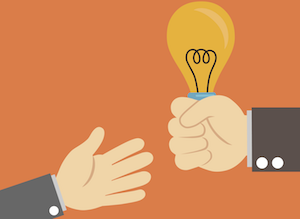 By explaining how the brain responds to attempts at influence, Sharot aims to help us become better at persuading and motivating others.

Research suggests that people don’t always act to avoid negative consequences. In one study illustrating this tendency, participants viewed a series of pictures and had to act (press a button) or not act (not press a button) when a certain one appeared. In some games, the correct response would earn them a reward; in other games, the correct response would save them from a loss.

Ultimately, participants performed better when they had to act to earn a reward and not act to avoid a loss, rather than vice versa. In other words, it’s counterintuitive to the brain to do something to avoid a negative outcome (or to not do something to gain a positive reward). That’s why getting family members to exercise isn’t as simple as citing the dangers of a sedentary lifestyle or subtly pointing out their weight gain.

What could you do instead? While negative emotions and images encourage inaction, research also suggests that positive ones tend to inspire people to act. So you might try raving about your fancy gym and its sauna rooms, or offering to do a fun fitness activity together.

In the same vein, one study out of Stanford University found that microlending campaigns are more likely to receive funding when the photographs of borrowers display more positive emotion. In fact, researchers could predict which campaigns lenders would want to fund based on how much activity they showed in a part of the brain called the nucleus accumbens, which is implicated in motivation and reward. If we exhibit positivity, the people around us may be naturally inclined to act.

When we’re communicating negative information, listeners will be particularly susceptible when they’re stressed. Sharot’s research team showed people statistics about the likelihood of undesirable events—car accidents or robbery, theft or credit card fraud—and they were more likely to believe them when they were under pressure, about to give a speech or fight a fire. That might be helpful if you’re a doctor trying to communicate disease risk to a stressed patient, but less helpful when you’re being misled—like when your competitors at work or in a sports game are trying to psyche you out.

People also have a tendency to tune out negativity or avoid it altogether, Sharot writes. “All else being equal, people tend to ignore negative information, which can make them feel bad, and seek positive news, which can make them feel good.” For example, research suggests that people are more likely to check on their stocks when the market is flourishing and avoid logging in when things are looking grim.

That means that communicating bad news and hard truths can be tricky—it’s difficult to talk to an ostrich with their head in the sand. In that case, it might be better to wait until people are more relaxed or to frame things in a positive way. Some airlines do this, Sharot explains, by making their safety videos (a somewhat unnerving communication) funny or musical.

While highly positive or negative communication can be influential, another effective way to exert influence is to give people control, Sharot writes.

When you tell someone they’re about to make a choice, another part of the brain’s reward system lights up—before they even know what the choice is. And that makes sense: They’re anticipating a good outcome that they’ll get to select for themselves. If you’re a parent, you may have discovered that kids are much more accommodating if you let them pick between two healthy snacks or after-dinner chores. On a societal level, simply asking people how tax dollars should be allocated subsequently makes them less willing to exploit a tax loophole.

“Giving away control, even a little, even just the perception of it, is a simple but hugely effective way” to influence people, writes Sharot.

How to protect yourself from manipulation 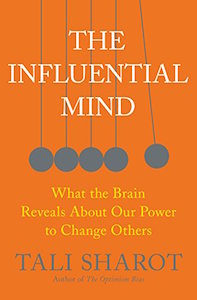 The Influential Mind: What the Brain Reveals About Our Power to Change Others (Henry Holt and Co., 2017, 244 pages)

Although The Influential Mind is full of insights about influence, it can also be read as a guide to avoiding manipulation. If our intuitions about how to influence others tend to be off, that also means we don’t understand the tactics others are using to influence us.

Take the anti-vaccination movement, Sharot writes: In the face of all the anxiety-provoking stories about what could go wrong vaccinating kids, the brain is hard-wired to want to do nothing. In other areas of life, we can be deceived by feel-good positive emotion: by the diet coach who always praises our eating habits or the real estate agent who always shows us perfect homes in perfect neighborhoods.

We can also be manipulated by the illusion of control. In some situations, we’re given a choice that isn’t really a choice—would you prefer the blue Jaguar or the red one? Or we feel we have control when we actually don’t: In experiments that enforced a “lab tax” (on money earned from participating in the study), people complied with the tax more after expressing their opinion about how the money should be spent, even though the lab made no promises about listening to their feedback.

The Influential Mind is the kind of book you don’t want to end up in the wrong hands, because these tactics can be used for good or evil: to get patients to exercise or to recruit terrorists. It’s up to us to use them for good—and to combat the voices out there who have less noble ends.