Immigration is on the rise around the world, according to UN reports. War, starvation, economic hardship, or persecution have forced many people to seek new homes in more peaceful countries, like the United States or the nations of the European Union.

But not all countries have welcomed immigrants and refugees. Nationalist movements appear to be on the rise, including in the United States, where the new president recently signed executive orders banning immigrants from certain countries. Last week, the president suggested that immigration is driving a crime wave in European countries like Sweden. 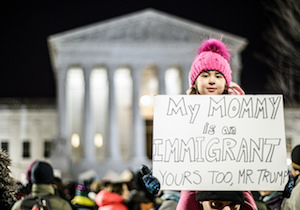 Protest of President Donald Trump's "Muslim ban," an executive order that barred citizens of seven countries from entering the United States but was since overturned © Geoff Livingston / Flickr / CC BY-NC-ND 2.0

That’s a claim refuted by many Swedes, including psychologist Marta Miklikowska of Orebro University. “I can point out research that shows socio-economical factors account for criminal behavior to a larger extent than an immigrant background,” she says. “And research shows crime levels aren’t rising in the long-term perspective.”

Despite such findings, prejudice and xenophobia persist. Miklikowska studies how negative biases develop and what can be done to combat them. While other researchers have found that parents and peers can influence the development of biases in children, her newest study focuses on adolescents and the role that empathy and cross-group friendships play in bias formation.

She found many factors influence teen bias against immigrants. The biggest one may be their parents, followed by peers. Fortunately, there’s a solution to being surrounded by prejudice: cross-group friendships, which lead to more empathy and concern—and a more welcoming attitude toward immigrants.

The place of parents

Miklikowska surveyed hundreds of non-immigrant teens about their attitudes towards immigrants at three points during their adolescence—at 13-14 years of age, then two years and four years later.

The teens reported on how much they agreed with statements like, “Immigrants often come here just to take advantage of welfare in Sweden,” with results averaged into an anti-immigrant bias score.

In addition, the teen participants provided a list of their closest friends, which was used to see if they had any first or second-generation immigrant friends, as well as to provide a close friend whose scores on anti-immigrant attitudes could be analyzed. The researchers also measured the teens’ empathy level using a standardized questionnaire. Finally, the study looked at the parents, who filled out questionnaires about their economic status, education level, and sentiments towards immigrants.

All of these data were analyzed to see how they interacted with adolescent biases two and four years later.

Results showed that parents seemed to have the biggest and longest-term impact on their kids’ attitude toward immigrants. However, parental (and peer) influence could be mitigated with cross-group friendships.

“Having a friend with another ethnic background reduces anxiety that is likely to occur when we interact with someone unknown,” says Miklikowska. In short, personally knowing someone from a different group helps calm the fears that family and friends are fanning.

The key is empathy, which Miklikowska found explained how friendships affected teen biases. Having a friend with positive attitudes towards immigrants, or having an immigrant friend, was tied to higher levels of empathic concern in adolescents, which then predicted their decreased bias toward immigrants.

These results fit in well with prior research showing empathy is associated with egalitarian political attitudes and the support of diversity, and that interventions to boost empathy decrease prejudice, says Miklikowska. 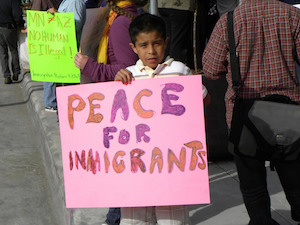 “Empathy facilitates the development of tolerant attitudes,” she says. “It appears that inter-ethnic friendship’s positive effects on adolescents’ empathy might counterbalance other negative effects.”

In addition, Miklikowska found that teens from lower socio-economic backgrounds, and with less educated parents, tended to have more negative bias toward immigrants. This suggests that perhaps decreasing economic disparities and improving educational opportunities for all citizens may also be a good route to decreasing bias, she says.

“Working only with adolescents and their skills, or only with parents and their attitudes, might not be enough,” she says. “Reducing poverty, segregation, and inequalities between people are factors that need immediate work, too—for many reasons.”

Her findings suggest that reducing bias in teens needs a multi-pronged approach, one that promotes cross-group friendships and empathy-building, as well as societal changes. She hopes her research will encourage countries to embrace inventions that can lead to a more harmonious, integrated society—not just for immigrants, but also for the native citizens.

“Anti-immigrant attitudes have negative consequences not only for the immigrants, but also for the host population, because they contribute to negative interpersonal relations in all contexts,” she says.

“Hopefully, by working with children and adolescents we can affect society in the long run.”