I keep technology at a little distance, which makes me unusual among millennials. Four out of five of my peers—those born after 1980—own mobile devices, which are always on, always on us, and always connected to social media like Twitter, Facebook, and Instagram.

But while all my friends seem wired into their smartphones 24-7, I’ve turned off notifications on my iPhone and I participate in the occasional technology Shabbat. 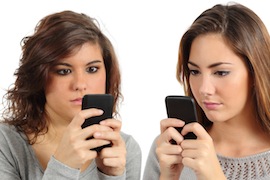 It’s hard to shake the feeling that, although smartphones open the door to new kinds of social connection, they burn through precious social capital—the web of social networks that research says can help us to be happier, healthier, and better employed.

I’m not alone. In fact, Greater Good contributor Barbara Fredrickson published a study last year that suggests smartphone use may be taking a toll “on our biological capacity to connect with other people.”

But do digital devices and social media really disconnect us from the flesh-and-blood people in our lives? Or can mobile devices actually add to our social capital? Researchers are starting to explore these questions—and the answers suggest that our social media presence need not detract from our real-world social connections. In fact, technology can actually increase our social capital, if we know how to use it.

When it’s smart to use smartphones

First up, do smartphones actually reduce our social capital?

To find out, a team of researchers at the University of Florida surveyed 339 students about the intensity of their smartphone use and online social networking. They found that, on average, participants reported spending about 100-200 minutes per day using the Internet and about 30-90 minutes using social networks. Then the students answered questions about four dimensions of social capital:

The results? Across the board, heavy smartphone use was positively associated with all four measures of social capital. So it seems that all those people who are glued to their phones are not necessarily more socially isolated.

But this relationship only exists to the extent that the smartphones were being used for their social networking capabilities, as opposed to random Internet surfing. In other words, only those who used their smartphones for social media like Google+ or Twitter knew more people, were more involved with organizations, participated more actively in politics, and perceived more trust among their peers.

This study was of young people. Do people on the other end of the age spectrum also benefit from online social networking?

Studies have shown that older adults—those 65 years and up—who use social networking sites benefit from better health, reduce their chances of cognitive decline, and prevent premature death. But only four percent of Facebook users in the United States are over 65, which suggests that older adults may be missing valuable opportunities to strengthen their social ties through social media.

A team of Mexican researchers designed their own type of social media platform, called Tlatoque, which borrows many of its features from popular networking sites (e.g., it has a news feed, status updates, and photo sharing capabilities). After a few weeks, the researchers looked at how interactions through Tlatoque influenced social capital and interactions in the real world.

They found that the system significantly enriched these adults’ relationships with close friends and family. The authors suggest that’s because the system helped them become more aware of what their relatives were up to, enabling the sharing of information with friends and family who prefer social media to the “more traditional” ways of staying in touch. This catalyzed and enriched real-world conversations, according to the results.

While Tlatoque might not be coming to an app store near you anytime soon, this study is the first to suggest that we can use our online social capital to enrich our in-person encounters. It’s a good first step toward understanding the relationship between online and offline social capital—and how both of these networks might influence one another. 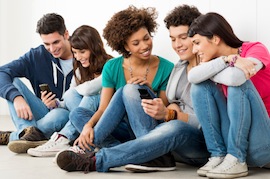 The results of these two studies seem conclusive: Together, smartphones and social media can increase your social capital.

But are all forms of social capital created equal? Another study, recently published in the International Journal of Human-Computer Interaction, looked at how the micro-blogging platform Twitter builds different types of social capital.

On Twitter, all messages posted are publicly available in the global feed of “tweets.” But to filter this feed, users can choose to follow other users. That’s a great way to learn about a new job, read about different experiences and opinions, or feel like part of a group that’s bigger than yourself.

These types of bonds, which are largely informational, are described by researchers as bridging social capital, which the authors loosely define as, “the formation of rather weak ties between people from different networks.” Bonding social capital, on the other hand, has a more emotional tone. Bonding happens in homogenous groups of like-minded individuals, like friends or family. So if bonding capital is about connecting more deeply, then bridging capital is about connecting more widely.

If you were to guess, which one would you say Twitter helps to build?

The researchers had a hypothesis that it was both. So they asked 264 Twitter users to report their number of followers and followees, estimate the number of minutes they spend on Twitter on an average day, and answer a few questions that would approximate a measure of both bridging and bonding social capital. A typical question for bridging social capital asks if “interacting with people on Twitter makes me feel like part of a greater community”; a question for bonding social capital asks if, on Twitter, “there are several people I trust to help solve my problems.”

Twitter did indeed seem associated with both bonding and bridging social capital—but only if the number people you interact with on Twitter fell within a goldilocks zone of not too few and not too many.

For example, people who spent the most spent more time on Twitter and followed more users reported more bridging capital. This is because the more you follow, the more opportunity you have to gain exposure to new ideas—or, as the authors say, to “expand your horizons” beyond your “narrow daily existence.” So is it best to follow as many people as possible? The answer is no, according to this study—when we follow too many people, we risk information overload. As the authors caution us, “There can be too much of a good thing.” More is better, but only up to a point.

When it comes to bonding social capital, a similar principle applies. They found that a user with an engaged and dedicated audience of followers is likely to feel a great sense of emotional support. But if that user’s follower network becomes too large, it becomes an abstract faceless mass, “which increases the user’s psychological distance from his or her followers.”

So to build the most bridging and bonding capital on Twitter, you want a village of followers, not a teeming metropolis.

What might this have to do with our offline social capital? While it wasn’t the main focus of this study, researchers found that those who feel more connected in their everyday lives also seemed to feel more connected to their online peers, not unlike the elderly participants of Tlatoque. So in some way, there is a relationship between your offline self and your online profile. The Tlatoque study even suggests that online connections can support the offline ones.

Taken together, these three studies hint at a compelling story—that social networking services can be a significant way of developing, maintaining, and strengthening our social connections, both online and in person. Using social networking services builds social capital in a number of ways: greater emotional support, lower levels of loneliness, and more feelings of connectedness. But these studies also contain a note of caution: Too many followers and too much participation can lead to information overload, depression, and feelings of disconnectedness.

The bottom line? I’m going to keep my iPhone and my Facebook account—but I think I’ll also keep setting limits.