What’s the most popular emotion in the world? Well, on Facebook at least, the answer is clear: It’s love.

How do we know that? Because the UC Berkeley Greater Good Science Center worked with Facebook to develop a new set of animated emoticons to express a broad range of 16 feelings, from sadness to awe to amusement to that queen of emotions, love. They were called “finches,” in honor of the birds studied by Charles Darwin.

In what nation are Facebook users most likely to express love through a finch? The answer may surprise you.

Love is a finch

People use emoticons everyday in online communications: They’re fun little graphics that allow us to infuse a written message with some extra feeling: a smile : ), a raised eyebrow smirk ; /, or a clownish frown :(

They’ve become so ubiquitous to compensate for the limitations that come with texting, emails, IMs, status updates, or tweets: These forms of communication preclude important signals that we always use when talking face-to-face, like expressions, tone of voice, gesticulations, and posture.

But the classic emoticon is a blunt instrument. Static yellow circles or keyboard character-features pale in comparison with the richness of real live emotion signals we use to understand each other every day.

In an effort to expand the palette of different feelings that people can share through emoticons, researchers from UC Berkeley’s Greater Good Science Center (including Emiliana, one of the co-authors of this article) worked with engineers at Facebook and a talented illustrator from Pixar, Matt Jones, to create a new, richer set of emoticons based on Darwin’s careful descriptions in his pivotal 1872 book The Expression of the Emotions in Man and Animals.

The scientists delivered research-based phrases like this one to the rest of the team: “Sadness: The eyelids droop as the inner corners of the brows rise and, in extreme sadness, draw together. The corners of the lips pull down, and the lower lip may push up in a pout.”

Based on these phrases, Jones created sketches for a new class and range of emoticons, which were turned into clever little animations and built into Facebook’s Sticker Store, for people to use for free anytime they wanted to send a message on Facebook—the Finches.

From Russia with love

To understand the use and impact of these emoticons, researchers from the Greater Good Science Center at UC Berkeley and the University of Cambridge in the UK have looked at how many finch emoticons of every kind were sent on any given day from every geographical market that uses Facebook.

The research team plotted these patterns onto a geographical map. The most popular finch, they found, was love—which is appropriate, given that Valentines Day is coming up.

The map above represents 122 countries, showing the percentage of love fiches used within each country—the redder a country is, the more love its citizens expressed through a finch, relative to the other finches.

Around the world, love represented almost 15 percent of the 16 finches available. But the most hot-blooded country—the darkest red—is the one currently hosting the Winter Olympics: Russia.

It’s not that Russians are more loving than Canadians because they send more love finches. It’s that, given the choice of many emoticons to use, the Russians are choosing the one for love more frequently than the other emotions. In contrast, Canadians are choosing to send a more equal number of love finches alongside ones that express other emotions.

Why might this be the case? That needs more research.

How many finches does it take to make you happy?

But the analyses done to date might tell us something about Russians and Canadians—and reveal patterns that square with a great deal of emotion research. 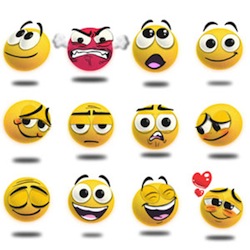 For example, it turns out that using a more balanced proportion of emoticons—the Canadians are a good example—is associated with greater overall happiness.

“More expression is good, but not more positivity,” says Alex Kogan, a Lecturer at the University of Cambridge, who analyzed the patterns.

In other words, it’s not just a willingness to express emotions that is associated with happiness—those emotions need to be diverse, according to Kogan’s study of finch use. Too much of one feeling or another seems to be bad.

Russia actually lacks this emotional diversity, to its detriment. “While Russia is high on love,” says Kogan, “it’s not particularly high on life satisfaction from other measures—in fact, it tends to be pretty low!”

Not surprisingly, stability seems to also be a good thing. “Nations where there is more variability from day to day in terms of amount of emotional expression—people do worse in life satisfaction,” says Kogan.

So don’t stop sending those love finches, Russia. But remember to balance them out with some bemusement, surprise, anger, and sadness.