What do your political affiliations say about you and what you want? Whether you’re a Republican or Democrat (or Libertarian or Green or Socialist) can, of course, suggest who you’ll vote for and which public policies you support. But research has uncovered some less-obvious preferences. Our affiliations can also reveal who we want as friends or where we get the latest news—and a new study reveals another unexpected association: Ideology seems to be related to the types of emotions that people want to feel. 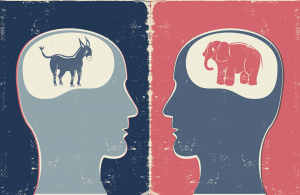 Existing research has already suggested that liberals tend to feel more empathy than do conservatives. However, those studies tended to ask participants about compassion toward, for example, ethnic minorities or the poor, who might be more likely to identify as liberal. This sense of “in-group” affiliation might therefore elicit more sympathy from other liberals—and on the flip side, more hostility from conservatives if they are seen as members of an “out-group.” To address the possibility of this in-group bias, Yossi Hasson and colleagues specifically explored empathy toward targets who were part of either the participants’ political in-group, out-group, or neither.

Additionally, the researchers broadened their examination in two novel ways. For one, they broke the empathic process into three key steps: the anticipatory desire to empathize; the actual experience of feeling empathy; and the behavioral motivations resulting from those feelings (i.e., willingness to help those in need). Second, they studied empathic responses in three countries, to see whether the predicted differences between liberals and conservatives depend on culture.

To answer these questions, they recruited over a thousand liberal and conservative participants from the U.S., Israel, and Germany. First, the participants read an ostensible news article about twelve people suffering injuries at an overcrowded protest. However, the article was subtly altered in each of three experimental conditions: The protesters were described as either liberals, conservatives, or local residents (without a specific political identification). With only this information, participants indicated how much empathy they wanted to feel while reading it. Then everyone rated how much empathy they actually felt while reading about the protest, and how willing they would be to help the injured victims (by, for example, sharing the story on social media or donating money to help out with medical expenses).

As previous research suggests, liberals were indeed more likely than conservatives to want to feel empathy before reading the article, and they correspondingly reported higher levels of empathy afterward. Liberal participants also reported greater willingness to help the injured victims.

Did these patterns occur in all three countries? Broadly, yes—in all three countries, liberals experienced more empathy compared to conservatives, and reading about victims from your own political party elicited more empathy than reading about protestors from the opposing party. However, participants from the U.S., Germany, and Israel did differ in some more nuanced ways. For one, Israeli liberals and conservatives were equally motivated to help the injured protestors, whereas American and German liberals reported greater motivation to help compared to their conservative counterparts.

Another difference between the three countries had to do with the nature of participants’ bias toward in-group members. Participants from all countries felt empathy more strongly for members of their own political party than for those from the opposing party, and in the U.S. and Israel, levels of empathy toward non-politically-identified victims fell somewhere in between. German participants, however, actually felt the most empathy for those non-political victims, even more than toward victims from their own party.

These findings add to a growing base of research suggesting that ideological differences are about more than just politics: They may also be deeply intertwined with psychological differences, including the desire to feel certain emotions. Indeed, studies have shown that liberals and conservatives differ in overall levels of emotions like empathy and disgust. Hasson and colleagues add a subtle but important insight: Ideology is also associated with how much a person might value certain emotions. And when it comes to prosocial emotions—the ones that tie us together—the desire to feel a certain way can influence how we treat other people, both on an interpersonal level and on a broader policy level. If we try to avoid empathizing with certain groups of people—imagining what they feel—then this might reduce our motivation to help them out.

Yet, this isn’t necessarily the end of the story. Think back to those Israeli participants: Liberals and conservatives were equally willing to help the injured protestors. Although Hasson and collaborators did not explicitly design their study to examine why this might be the case, we may be able to glean some hints at a potential answer. For instance, even though the Israeli participants were evenly divided between liberals and conservatives, 96 percent of them shared a common religious identity—Jewish. Perhaps, then, the strength and salience of other group identities—and their overlap—might help in fostering cross-group empathy.