Purity is the moral foundation that drives people apart—and a glue that keeps them together, a new study suggests. 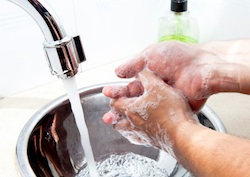 “We started by observing relationships on Twitter and by looking at distance between people, who they follow on Twitter and the type of rhetoric that they use,” says Morteza Dehghani, lead author and an assistant professor of psychology and computer science at the USC Dornsife College of Letters, Arts and Sciences. “We found that the rhetoric related to the moral concern of purity, out of all the moral values, was the best predictor of distance between two people.”

The researchers believe the study, published this month in the Journal of Experimental Psychology: General, is one of the first investigations combining big-data social network analyses with more traditional behavioral experiments.

Co-author Jesse Graham—a USC Dornsife assistant professor of psychology who developed Moral Foundations Theory with New York University’s Jonathan Haidt—says that purity is a value that can dramatically divide people based on their political and religious convictions.

“Concerns about purity could have to do with physical purity, like disgust or cleansing, but also a kind of spiritual purity — things like treating the body like a temple instead of a playground, resisting our lower carnal desires in favor of a higher, divine nature,” Graham says. “It has a spiritual-moral dimension to it, but it’s not necessarily explicitly religious.”

To conduct this examination of “homophily”—love of the same—the researchers tested their theory in three ways, including one study that involved a computer analysis of more than 731,000 tweets about the 2013 U.S. government shutdown.

“We already knew that people were socially divided,” says Graham. “We were trying to figure out which factors divide us.”

The scientists analyzed tweets about the shutdown from Oct. 1, 2013 to Oct. 24, 2013, almost a week after the shutdown ended. Within the Twitter data, they mapped the social networks of 188,467 users.

The research team used network analysis to determine the social distance between every single user in the Twitter sample. It used computational text analysis to accurately measure all of the different moral concerns that Twitter users expressed.

The degree to which people expressed moral purity concerns could predict how close they were to each other on the Twitter social network. This affected whether they were direct followers or stayed away from each other—and friends of each other.

Surprisingly, this wasn’t just a matter of politics. The researchers found that when they broke the Twitter social network into two distinct political clusters, purity predicted social distance within the liberal and conservative clusters.

The next two experiments were behavioral. In the first of them, 235 participants were asked to rate the morality or immorality of behaviors in a series of scenarios. Graham says the questions asked participants to rate, for example, the immorality of kicking a dog.

After completing those scenarios, participants were told that their scores closely matched another person’s scores on four of the five moral domains. The participants were then asked to rate how near they would sit next to this person on a bench. They also were asked to rate their willingness to let a person into their communities on a scale from 1, “I would let that person marry into my family” to 6, “I would exclude that person from my country.”

Participants were randomly assigned to hear that another person scored similarly to them except on the issue of one of the five moral concerns (care, fairness, loyalty, authority, purity). Of the five, purity provoked the strongest divisions: Those in the purity condition wanted to keep as much physical and social distance from the offending person as possible.

The second behavioral experiment echoed that result. The researchers followed similar steps, but now with 557 new participants, who rated the morality of several scenarios. Then they were told that they were very similar to a potential partner in one moral domain, but dissimilar in other domains.

As with the previous studies, purity was the big mover. Those in the purity similarity condition wanted to be closer to the other person than those in the other condition. Again, the researchers found this effect was not attributable to ideology, religiosity, severity, or frequency of the scenarios.

“This could have potential implications for understanding political migrations, both in online social networks and in real life,” Dehghani says.

A different version of this piece appeared originally on USC News.