The questions raised by racism and xenophobia go straight to the heart of what it means to be human, for they involve dehumanization. Prejudice means we implicitly embrace a definition of humanity that includes some—usually those who most resemble us—and excludes others.

That’s why Susan T. Fiske was invited to speak at Being Human 2013, a showcase (co-sponsored by the Greater Good Science Center) of scientific insights into the nature and direction of our species.

As the Eugene Higgins Professor of Psychology and Public Affairs at Princeton University, Fiske has become one of the leading investigators of stereotyping, prejudice, and discrimination, and she is the author or co-author of many books, including Envy Up, Scorn Down: How Status Divides Us and The Human Brand: How We Relate to People, Products, and Companies, just released this month.

Fiske has especially explored how snap judgments shape our social interactions. She has found that people we see as warm and competent elicit the most positive emotion and behavior from us. Unfortunately, however, her studies show that those perceptions are heavily influenced by factors like race, age, gender, disability, and more—and that this millisecond social-sifting translates into widespread stereotyping and discrimination.

As Fiske described at Being Human, all over the world it is the poor, homeless, and immigrants who bear the brunt of discrimination, eliciting feelings of outright—but often subconscious—disgust from study participants. I spoke with her backstage at that event about her research and hopes for a future without prejudice.

Jeremy Adam Smith: What does prejudice reveal about what it means to be human?

Susan T. Fiske: Well, for me it reveals two things. It reveals something good about human nature, which is that we care deeply about our in-groups. It’s only human to be comfortable with people who you think are like you; there’s nothing wrong with that. In fact, it gets us through a lot of stress—to be attached to our in-groups is our backup system.

But the downside is that you’re then excluding people who are not in the in-group. That’s the problem, especially in modern society, where it’s better to be able to deal with a variety of people and to deal with them respectfully.

JAS: What do you say to people who put the emphasis on the downside—who argue that hate and distrust for outsiders defines us as human beings? 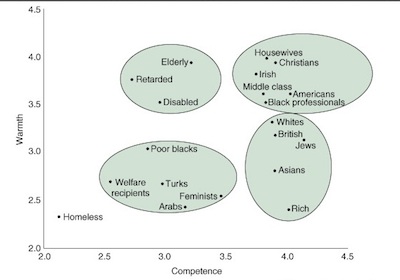 STF: In our research, we talk about warmth and competence dimensions. And the warmth dimension is completely predicted by cooperative or competitive intent.

So, if you think the other group is competing with you, then of course you don’t trust them. A perfect example of this is the implications of framing: If you think about an immigrant group as taking away American jobs, of course people are going to hate them. But if you frame the immigrant group as taking jobs nobody else wants and growing the economy, then they’re cooperating and sharing our values and goals—and so people feel well-disposed toward them.

So viewing groups as having warm and trustworthy intent (or not) is really crucial, as your question implies—but it’s malleable. Perception of competence, for example, is completely predicted by perceived status. To me this is deeply unfair, because it says that high status people are smart and low status people are not, and therefore, according to this view, people are getting what they deserve.

STF: Yes, and the correlation is really high between perceived status and perceived competence. One is a demographic variable: How prestigious is your job? The other one is an individual human variable: How competent are you? The idea that people think those are redundant—that one points to the other—is really strange and terrible, because people do not always get what they deserve. There are contexts that determine these outcomes, and also there’s chance. But people’s intuitive theories about status and competence don’t accommodate those facts. This is very unfair.

JAS: Are Americans more prejudiced than other humans, as some say?

STF: Well, I’m not down on Americans that much because we have the only founding documents that say that people are created equal. OK, I grant you it was property holding white men, but we’ve gotten beyond that.

JAS: When I was like a young leftist, I was constantly down on Americans. I felt, without much evidence, that we must be the most racist people in the world. Then I traveled and lived abroad for a little while. And I discovered that, Wow, we’re really not that racist, actually.

STF: When I used to go to Europe before they had a big immigrant influx, people would say, “Americans are racists.” And I would say, “Yeah, we are, and I feel terrible about it, and I’m working on it, but you know, what can I do?”

And then I realized Europeans, at the time, didn’t have a critical mass of people who were different from them. But over the past few decades, as they began to have immigrant guest workers and immigrants from their former colonies, suddenly they had a problem, too.

And I’ve found that the outlines of both blatant prejudice and subtle unexamined forms of prejudice are identical in Europe and in the United States. We’ve now done our warmth-by-competence map in three dozen countries, and the results amaze me: It’s the same everywhere.

The ethnicities are different, but the social-class prejudices are the exact same everywhere we go. This means that poor people are always completely useless, and rich people are envied and cold-but-competent, and middle class people are good. But what really blew me away is that old people are in the pity part of the space everywhere we go, even in East Asia.

So the United States is not an outlier in terms of badness of prejudice. Plus, we have a shared ideology that says we shouldn’t be biased—and a shared ideology that says we’re an immigrant country. I’m kind of an optimist. I don’t think Americans are superior, but I think that we have some really great features of our society that will accommodate diversity better and better as times goes on.

JAS: What assets do we as Americans have in this battle against prejudice?

STF: Our founding documents say that people are created equal, and we have made, over time, a series of decisions about specific groups to include in that definition of people.

As Americans we have a lot of faith in mobility. It turns out it’s sort of a misplaced faith because, in fact, we’re not particularly mobile compared to other countries, but we think we are. That has good and bad features to it: When people do strive, other people applaud it; but when people fail, they get blamed.

JAS: In what ways do we need to keep changing collectively to keep advancing? Obama’s election was a milestone, and yet he’s become a target that has provoked a shocking amount of overt racism. We’re moving toward immigration reform, but this past year we’ve deported more people than ever. It seems to me that we’re in a very delicate transitional period.

STF: We are in a delicate period. My husband’s a demographer. And as he puts it, “Demography is destiny.” You can fight the demography, but it’s still gonna happen. The American population is changing, and the die is cast. People marry and have children across boundaries that would have been insurmountable before. It is a delicate, tense period because some people are having a hard time getting used to it. But I think that the future is not black and white—it’s café au lait. And that’s good.