Sudden trauma can happen to any one of us at any time. We can receive a devastating diagnosis, lose a loved one, be hit by a car. In some communities, people are routinely exposed to traumatic events—most notably the poor who live in dangerous, violent neighborhoods or in war-torn regions of the world. Though the human mind is designed to withstand emotional challenges and bounce back, trauma can take its toll on victims by causing depression, anxiety, or PTSD.

But not always. When faced with trauma, some people bounce back, finding new strength, or a honed sense of purpose. Some—like Desmond Tutu or Elie Weisel, for example—end up performing extraordinary works in their lives. We admire these people for their tenacity and strength, but we might also wonder if we would have the same resilience if faced with the same challenges. 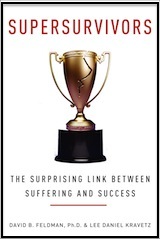 In their new book, Supersurvivors, psychologist David Feldman and science journalist Lee Daniel Kravetz explain why some people seem to bounce back and even excel after trauma. Their book infuses the stories of “supersurvivors,” with research findings that help uncover the individual traits or circumstances that help trauma-survivors to experience “post-traumatic growth” rather than to suffer psychological setbacks.

According to Feldman and Kravetz, there are five factors that seem to help people transform suffering into positive change: hope, personal control, social support, forgiveness, and spirituality. They debunk the idea that positive thinking alone is helpful—at least, positive thinking in the self-help book sense. Positive thinking in the face of cruel reality, they argue, keeps people stuck striving for goals that are no longer attainable. Instead, it’s better to accept one’s loss or setbacks before moving forward.

They write, “Truly accepting the consequences of a trauma with realistic thinking rather than delusional positive thinking can open people up to true hope—something that enables setting and achieving goals that ultimately can improve one’s life.”

According to the authors, those who have an inflated sense of self-control may also have an advantage when overcoming adversity, because they will tend to be willing to take more risks. Research by Shelley Taylor at UCLA on “positive illusion,” or the “overestimation of personal control and similarly overblown views of the self,” has shown that mild self-aggrandizement is associated with confidence and is present in highly successful people—i.e., CEO’s of large, successful companies.

They are also associated with supersurvivors: “A realistic view of the situation + a strong view of one’s ability to control one’s destiny through one’s efforts = grounded hope,” write Feldman and Kravetz. This kind of hope, they argue, is what really helps someone forge a new path in life after having been traumatized.

In one study, researchers found that victims of Hurricane Hugo in the Carolinas had more emotional wellbeing, post-disaster, if they believed they had high levels of social support, regardless of how much actual support they received.

In addition, the ability to forgive is profoundly life-changing for those supersurvivors who’ve been victims of abuse at the hands of others. Forgiving helps them to get unstuck from their traumatic past and to find a way forward, while not forgetting what transpired in their lives. Both of these findings meld well with the wealth of research supporting the benefits of forgiveness and social support.

But in some cases the authors’ findings seem less supported by research, or there are some unresolved contradictions. For example, in a chapter featuring anti-war activists, Cindy Sheehan and Paul Rieckhoff, the authors write that their willingness to alter their worldviews helped them to survive trauma and repurpose their lives. Yet, in another chapter, the authors contend that holding on to faith can also strengthen one’s chances of surviving trauma. These concepts seem contradictory, yet little explanation is given.

And sometimes the authors seem to go off on topics that seem tangential to the book. For example, they write of research showing that when people are given a reminder of their mortality, they act with more prejudice toward others. This is an interesting finding; but where’s the tie to supersurvivors? Other times I wanted to see more scientific evidence to strengthen their case. Perhaps, in the interest of storytelling, much of the science was edited out of the book. But, unfortunately, this has the effect of weakening their overall premise and confusing the message.

Even so, one of their main points is worth emphasizing: Supersurvivors are not extraordinary people, but ordinary people who make the most of their circumstances. Perhaps if we all paid more attention to how trauma effects us and others, engaged our self-agency more, learned to forgive, and made the most of our choices, we would all be better at adapting to trauma. The everyday heroes featured in the book may not special by nature; but they certainly are inspirational.