Trauma, by definition, is not good. The Merriam Webster’s online dictionary defines it as “a disordered psychic or behavioral state resulting from severe mental or emotional stress or physical injury.” Many of us look at trauma as an unavoidable state brought on by an unexpected event, something that might occur after a natural disaster or war. 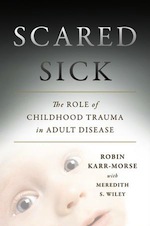 But two new books give us a somewhat different look at trauma. Scared Sick: The Role of Childhood Trauma in Adult Disease, by Robin Karr-Morse, examines early childhood trauma in the form of very preventable parental neglect and abuse and its role in increasing the risk of adult disease later in life. What Doesn’t Kill Us: The New Psychology of Posttraumatic Growth, by Stephen Joseph, on the other hand, looks at the potential benefits of using trauma as a springboard for furthering personal growth.

According to Karr-Morse—a family therapist involved in Oregon State’s child welfare reform movement—many of the newest findings in neuroscience and health research are showing a link between adult health and the stress produced by childhood trauma. Trauma—particularly the kind caused by ongoing, repetitive injury, like that experienced in violent homes or homes stressed through poverty—is associated with a heightened fear response, which bathes the brain in harmful neuro-chemicals that can cause lasting damage. Kids who experience trauma are more prone to experience higher levels of stress, anxiety, and depression. They also are more susceptible to disease and to engaging in unhealthy coping strategies—like using drugs, drinking alcohol, or smoking—which further risk their health.

Karr-Morse writes of the importance of positive early attachments—loving and attentive care that gives kids a sense of security and trust early in life—in preventing childhood trauma. But she knows that stressed parents, especially those who didn’t experience positive attachments themselves, can easily fall prey to abusing or otherwise stressing their kids. Frightening statistics about higher rates of disease and shorter life-spans for adults who’ve suffered childhood trauma lends gravity to the case she make: As a society, we would be better off health-wise if there were better prenatal and post-natal support programs for parents. 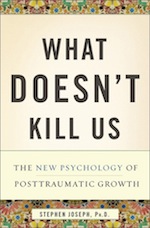 After reading Scared Sick, it’s a bit disorienting to read What Doesn’t Kill Us, a book by psychologist Stephen Joseph which highlights a completely different take on trauma: its potential benefits.

Joseph, a professor of psychology, health, and social care at the University of Nottingham, UK, is an expert the growing field of posttraumatic growth—a positive spin on posttraumatic stress disorder (PTSD) that emphasizes the possibility of transforming extreme adversity into an opportunity to learn rather than an overpowering obstacle. He presents a model for posttraumatic growth—which he calls THRIVE—that involves recognizing your strengths, reframing your experience in a more positive way [i.e. focusing on being a survivor rather than a victim], and nurturing positive changes in your life.

Of course, this would seem like a pat and simplistic notion if Joseph didn’t have the research to back up his claims. Joseph and colleagues have studied people who’ve gone through disasters and found that many are able to weather the experience better with appropriate interventions. And his target audience is not abused children, who would probably be unable to make use of the highly structured, cognitive exercise outlined in the THRIVE model.

Yet, when we consider the fact that adult mental health and child abuse are intertwined, it seems clear that these two books are complimentary rather than at odds. Perhaps if we could help adults heal from their psychological wounds and support them in being the good parents to their kids, we’d be able to build a more healthy society for all.