I’m a sex education teacher, and I am worried. 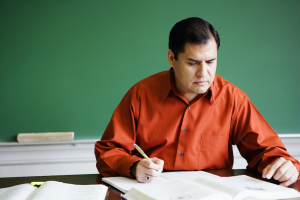 I’ve been watching the wave of book bans and legislation restricting what teachers can say in class roll out across the country—and I’m worried that we’re starting to treat other subject areas the way we’ve treated sex ed. I believe there are some valuable lessons to be gleaned from the battles over sex ed—ones that might help us all to fight back against this new wave of restriction in education.

Despite these results, a new study in the Journal of Adolescent Health finds that only about half of high school students in the U.S. are getting sex education lessons that meet the minimum standards established by the Centers for Disease Control, and that the number of students learning about birth control methods in school is actually lower now than it was 25 years ago.

We’ve ended up with huge variations in how sexuality education is carried out in schools. In some places, students spend weeks with a dedicated instructor and get lots of clear, thoughtful lessons. In other places, lessons are built around scare tactics, and delivered by a guest speaker in an auditorium. Some states emphasize inclusion of lesbian, gay, bisexual, transgender, and queer (LGBTQ) experiences and viewpoints, while others tell teachers to avoid talking about gender or sexual orientaion altogether. It’s a maddening patchwork, and it’s not a model anyone should replicate.

Because so much of what’s covered in American schools is decided at the state and local level, when people decide they want to challenge what a school is doing, focused advocacy efforts can be very effective. School boards and administrators tend to want to quash disagreements as soon as they can, which creates an impulse to always look for the “safest” option that won’t ruffle feathers—despite the fact that, in the case of sex ed, the vast majority of American adults support it.

This often results in schools turning away from lessons that have even a hint of controversy. It gives a tremendous amount of power to the small but loud groups that use attacks and fear-mongering to influence what is taught in our schools.

That’s why I’m worried to see the alarmist language people use to attack comprehensive sex ed mirrored in complaints about how schools talk about racism, history, and even social-emotional learning.

Most teachers aren’t used to defending their lesson plans to the public, or having to face a gauntlet of insults because of what they are teaching. Educators tend to be people-pleasers, and the idea that anything they are doing in their jobs will anger community members can be deeply upsetting.

Researcher Jeffrey Sachs, who has been tracking this legislation for PEN America, was recently interviewed on NPR’s Fresh Air. “I think it must be a very terrifying time to be an educator at any level in higher ed or in K–12,” he said.

He’s right: It’s incredibly stressful to teach while constantly watching your back, worried that you might lose your job if you say something the wrong way. This is just going to get worse as states like Virginia launch hotlines for parents to report teachers they believe are “behaving objectionably.” Many good teachers, when faced with that kind of intense scrutiny, may decide to change careers.

So how can educators help apply the brakes to this trend? Here are some practical ideas, derived from decades of sex ed fights.

Address parents’ concerns head-on. To take on the concerns of activated parents and community members, districts can address their worries directly, as the Edmond, Oklahoma, schools did in a recent post. Taking each concern seriously, even the ones that seemed like wild accusations or misinformation, the district made clear declarations, like “We are not teaching about Ted Bundy in 4th grade,” “Working to make sure every student belongs and feels welcome in our schools is not Critical Race Theory,” and “Despite the accusation of one parent at the meeting, we do not teach students to hate their country.”

Make the guidelines clear. To help teachers understand what they can teach without worrying about their job security, districts and states can publish (and update) clear state standards and frameworks for each subject, like the Health Education Framework we use in California. Administrators can then make it clear that they will protect any educator who is working to teach toward those standards. Teachers still need latitude to modify lessons to meet the needs of their students, and should be empowered to answer students’ questions honestly when they come up.

Increase teacher training and support. Teachers need training, support, and coaching that recognizes what challenging work this is, and helps them get better at their craft. Ideally, every teacher would be able to regularly meet with an instructional coach. That’s not always possible, but there are a lot of online resources to help teachers build their skills, like Planned Parenthood’s “Sex Ed To-Go for Professionals.” Even better are innovative efforts like Advocates for Youth’s Virtual Professional Development, which allows teachers to practice their skills in front of a simulated classroom during short sessions with the support of an expert instructional coach (it’s worth watching the preview video to see how it works).

In addition to emotional support and skill-building, we need to pay teachers well, and encourage our young people to make this their life’s work, so they gain experience and expertise and are less susceptible to the political winds of the day.

Teach media literacy. In a recent essay in Scientific American, Melinda Wenner Moyer explained why more schools are incorporating media literacy into their curriculum. “The idea is to teach kids how to evaluate and think critically about the messages they receive and to recognize falsehoods masquerading as truth. For children whose parents might believe conspiracy fantasies or other lies fueled by disinformation, school is the one place where they can be taught skills to evaluate such claims objectively.” Common Sense Media, The News Literacy Project, and KQED Education have great tools for teachers who want to tackle this subject.

Speak out, and communicate clearly. In education, relationships really matter. Instead of waiting for controversy to erupt, teachers can borrow ideas from sex educators, who know a lot about proactively addressing concerns from families. If students and families know and trust you, they’re a lot more likely to speak up in your defense.

It’s smart to steer clear of jargon and be as plain-spoken as possible, since there are active campaigns to weaponize some terms. Educators can just keep things simple—instead of using terms like “social-emotional learning” or “SEL,” they could say, “I help students practice expressing their emotions and learn how to calm down if they get angry or anxious.”

Put students first. School boards and curriculum review panels should make a real effort to hear from the people most affected by their decisions—the students—before important votes. Developing a strong youth advisory council is one way schools can give young people more voice in decision making. Young people can be powerful catalysts for change—the ethnic studies classes taught in so many schools today started in response to student protests.

When making choices about schools, adults need to keep the best interests of youth front and center. Sex education advocates have been doing this for a long time, and have developed some powerful, youth-centered communication strategies that can serve as examples for others.

No doubt about it, this is a challenging time in education. It’s important for teachers to find allies in and outside of schools. I’m grateful that organizations like PEN America are closely tracking proposed legislation and calling attention to it. I’m glad to see new advocacy groups like EducateUs starting to push proactively for expanding education rather than working from a defensive stance.

It important to celebrate victories, like Washington state voters passing the country’s first voter-approved sex ed mandate—a mandate that drew protests when it was initally passed by legislators, but was actually supported by a majority of voters.

As a sex ed teacher, I’ve learned to expect pendulum swings in public opinion, but I try to keep focusing on what’s best for students, and what is most likely to help them live long, happy, fulfilling lives and be engaged, critical-thinking members of our diverse society. After all, isn’t that the ultimate goal of education?