How often have you had the following conversation at work?

It is a script we stick to even if we are dying inside. 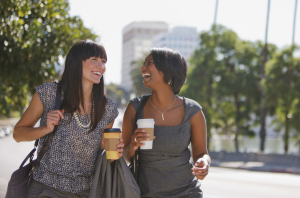 It’s hard to build real connections with your colleagues if you never get beyond superficial chitchat. And yet people who have a “best friend at work” are not only more likely to be happier and healthier, they are also seven times as likely to be engaged in their job. What’s more, employees who report having friends at work have higher levels of productivity, retention, and job satisfaction than those who don’t.

Many companies have tried to support office bonds through perks like ping-pong tables, free lunches, or corporate retreats, but the reality is that most of us don’t have close friends at work. In a survey by Pew and the American Life Project, just 12 percent of respondents’ closest ties were with people from their professional life. If we expand this to people who were significant in the respondent’s life, the results aren’t wildly different. Only 19 percent of the people surveyed had a significant relationship with a workmate.

This phenomenon seems to be particularly American. Going on a vacation with a coworker is virtually unimaginable in America—less than 6 percent of workers have taken their relationship with colleagues to this level. Research by Stanford professor Hazel Markus, author of Clash: How to Thrive in a Multicultural World, suggests that this fact is probably due to our cultural propensity towards fierce independence—rather than the interdependence characteristic of many other cultures. More than one in four Poles and close to half of Indians have vacationed with a coworker. Is there something that American workers are missing?

Research shows that, after food and shelter, belonging is a fundamental human need. Given that we spend between 8 and 9 hours of our day at work (not including commute time), we have significantly less time to fulfill our social needs outside of work. When we’re not working, we’re either dealing with family and errands, or trying to grab some rest when we can. The workplace, where we spend such a large portion of our time, is an ideal place to foster the positive connections we all need—not just for our well-being but also for our productivity and health.

That said, friendship at work is often tricky for a reason. It can be a mixed blessing; people who are friends with coworkers tend to perform better at work but they also report being more emotionally exhausted and having difficulty maintaining their friendships. When conflict (inevitably) arises among work friends, relationship conflict leads to negative outcomes in teams composed of friends, but positive outcomes among teams without prior friendships.

The difficult truth is it just may not be possible to have friendships at work without some degree of fallout. There are real entanglements that can arise when the boundaries between work and friendship become blurred. Work responsibilities need to take precedence over socializing. Managers and leaders need to continue being able to assign tasks, and role hierarchy does need to be respected. Performance evaluations need to happen authentically and honestly. Competition is often part of workplace culture—will you or your peer get promoted?—which can lead to lack of trust or willingness to get too close. After all, how would your friendship fare after you become their manager?

Alongside these factors is a fear of being vulnerable, of disclosing too much in case this disclosure makes you look weaker or less competent—worse yet, you might get thrown under the bus for it.

Finally, the need to look and act professional creates a desire not to get too informal or familiar with anyone else—after all, “professional distance” ensures that people will maintain respect for you. All of this can make friendship at work hard—or at least somewhat scary.

Maybe that’s why, despite the benefits of friendship at work, some people still choose to avoid it. Some just aren’t comfortable having real friends at work. They may benefit from a more formal relationship with their colleagues. And that’s OK. Many of the benefits that come from having friends at work likely emanate from values like vulnerability, authenticity, and compassion. Emphasizing these values, rather than the relationships, can allow workplaces to feel “friendly” even if there aren’t real friendships. Moreover, research by John Cacioppo, author of Loneliness, shows that the true health and happiness benefits of social connection stem less from how many friends you have in your circle and more from how connected you feel to them (after all, you can feel lonely in a crowd). So nurturing that internal and subjective feeling of connection and friendliness is really most important.

While some people will always be hesitant to make friends at work, for these or other reasons, social connection is a basic human need. All friendships have hard moments. Work friendships just have different ones.

This article was originally published on Harvard Business Review and Fulfillment Daily.