Most would agree that we need more compassion to help reduce human suffering in the world. But few prioritize building compassion in the place where we spend most of our waking time—our jobs.

Research suggests that compassionate workplaces increase employee satisfaction and loyalty. A worker who feels cared for at work is more likely to experience positive emotion, which in turn helps to foster positive work relationships, increased cooperation, and better customer relations. Compassion training in individuals can reduce stress, and may even impact longevity. All of these point to a need for increasing compassion’s role in business and organizational life. 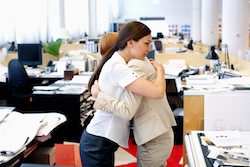 But how can we increase compassion in the workplace? Though research indicates compassion is a trainable skill, current compassion training programs often involve large investments of time and energy, making them inaccessible to most working Americans. Also, compassion may seem unnecessary to some, with the word “compassion” conjuring up images of Mother Teresa tending the poor rather than an average Joe trying to earn a living.

Now, some researchers want to make compassion training more convenient and appealing for those in the best position to spread its benefits: business leaders. Dan Martin from California State University, East Bay, and Yotam Heineberg of Palo Alto University—both visiting scholars at Stanford’s Center for Compassion and Altruism Research and Education—have come up with a promising format: compassion development dyads, or CDD for short. They hope that their CDD program will help to revolutionize the workplace.

Working together for compassion

CDD is a hybrid of compassion training and technology. Two people “meet” online via Skype for an hour a week for eight weeks to have structured discussions on topics gleaned from the science of personal and social well-being—topics like mindfulness, emotional literacy, and the importance of having a growth mindset.

The curriculum, based in large part on the work of researcher Paul Gilbert, the psychologist who pioneered compassion-focused therapy, helps people to become aware of how they typically respond to stress and threat in social and work situations, and then trains them to respond in more appropriate ways using tools like self-soothing, empathic listening, and compassion.

Martin and Heineberg hope that by using an educational rather than therapeutic approach they won’t have to rely on expert compassion trainers, which many programs currently do. “There aren’t enough experts around to reach everyone who can benefit from compassion training,” says Heineberg. “We wanted to make something evidence-based and similar to in-person trainings, but also make it more widely available.”

Heineberg suggests that CDD may be more palatable to businesses than other compassion-based training programs, because of its convenience and relatively small time commitment. In addition, it doesn’t rely on meditation training, which is often part of compassion programs but may prove a turn-off to some.

“We wanted to find out if we could have an impact without someone becoming a meditation practitioner,” he says.

Instead, the focus of the program is on helping people to enhance the quality of their social interactions in the workplace, something any business leader would understand, says Heineberg. The fact that participants explore these ideas with another person helps to make the program more than just a self-help reading assignment, allowing participants to feel increased connection and integration of the material as they explore it in a safe learning environment.

Getting results with compassion

So far, the program is showing promise. When the researchers tested it with a sample population of business students at the CSU East Bay campus, they found several key areas of improvement: By the end of the course, students increased their compassion for others, their subjective happiness, and their leadership skills, among other benefits. Despite the fact that the students were not exactly volunteers—they had been assigned to do the CDD with another student chosen by the teacher, Dan Martin—by the end of the program 94 percent of them were satisfied with the training and would recommend it to a friend.

Samantha Serna, one of the students in the pilot group, admits she was not very happy at first with the idea of being paired with a stranger to talk about personal issues.

Adding to her discomfort, her assigned partner turned out to be someone she had no interest in getting to know. But after staying with the curriculum for a few weeks, and learning the tools of “compassionate communication,” her attitude began to shift. She realized that she and her partner had a lot in common: Both had anger issues and were easily frustrated; both could become closed off from others and hold grudges. Now, she admits, they’ve become good friends and continue to help each other through difficult times, calling on each other whenever they could use a little perspective.

Heineberg admits that most of the students, like Serna, were less than enthusiastic about the program initially. “They were straight out complaining,” he says, “not seeing the material as relevant to them at all.”

But, like her, the program grew on them over time. “Many of the students were saying that it gave them a different perspective about how to be,” he says. “It proved to be a meaningful process.”

Though students might not have initially embraced the program, many stuck with it because of the dyad model, Heineberg says. Being in a dyad—where another person is relying on you—helps to encourage that consistency. In addition, as the program progressed, the participants formed bonds, based on the sharing of personal stories and values.

“When we use values work like this, we find that people tune into their shared humanity,” says Heineberg.

Heineberg credits research done at Stanford on self-affirmation theory for this aspect of the program. Participants are asked to reflect on their values and dreams, and to “share their success stories, focusing on how they may have suffered in some way but were able to overcome it and learn to soothe themselves—a positive psychology story,” says Heineberg. Analyzing success stories opens up participants to think of ways they might use this information in other situations, such as when they are under stress or having conflicts with a colleague.

“I had a perspective that said, ‘If you do wrong to me, I’ll do wrong to you,’” says Serna. “But I learned from the program that it’s not like that. I don’t have to take that attitude.”

In addition to making a new friend and gaining important insight into herself, going through the program improved Serna’s physical health, too.

“Before the program, I had a really bad temper; I was angry a lot. And, because I have epilepsy, I would get seizures frequently,” she says. “But, after the program, my stress level went way down. Now, with a combination of exercising and learning to control my anger, I haven’t had a seizure since the program ended.”

Her enthusiasm about the program has led Serna to consider changing her field of study to organizational psychology. She believes that this kind of information should be made available to more people in more settings.

Heineberg and Martin agree. They have plans to take CDD on the road and to offer it to several organizations, including a group of Bay Area hospitals that have expressed an interest in training their staff in compassion. The researchers plan to evaluate their model and to make improvements over time, so that it can be the most effective for the most number of people.

“Imagine what it might be like if engagement in compassion development was completely voluntary and available to anyone,” says Heineberg. “We could have a very big impact.”