What comes more naturally: To punish a thief—or to help her victim?

That’s the question tackled in a first-of-its-kind study published in the journal Current Biology. “Until recently,” the researchers write, “little attention has been paid to how punishment and a sense of justice develop in children.” 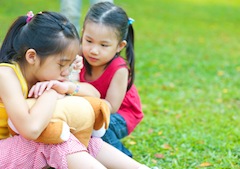 To find the answer, the researchers created experiments for children ages three to five that are similar to those previously tested on our evolutionary cousins, chimpanzees.

With their cohort of 137 children, the authors placed a single child and two puppets at a table, and put into motion scenarios that mimicked some societally recognized wrongs, such as theft and unfair treatment.

Dr. Keith Jensen is one of the study’s authors and a lecturer in the School of Psychological Sciences at the University of Manchester. In an email, he points out that one of the study’s key outcomes is that many preschoolers in the former scenario showed outright concern for the victim who was thieved. The children tried to restore the filched object to the upset puppet rather than punish the thief-puppet.

Why would a child—here acting as an “observer” or “bystander”—bother to intervene and help the puppet-victim?

“There are famous examples where, even as adults, we don’t,” Jensen says. “What is particularly reassuring is that children do respond strongly to the needs of others.”

In similar studies with chimpanzees, the bystander watches passively as an injustice occurs, not acting to help the victim. Or, as a matter of copycat behavior, the chimp takes the desired object herself, believing it’s OK to do so.

By contrast, Jensen notes that human children in most cultures learn at a very young age that stealing is bad.

Many in the study became very aware that taking away from someone an important item like food or a toy is bad, as it causes anguish. To remedy the other’s woe, the children would restore the object to the wronged puppet or instead cache it in his “cave.”

“It seems the concern for the distressed puppet was just so strong, the children felt the need to do something,” Jensen reports.

And this tendency should be nurtured, he says. “[W]e could build on the natural inclination of young children to help others and their sensitivity to distress.”

Practically speaking, on a playground, for instance, where a modicum of the world’s rough-and-tumble nature often transpires, “The parent or teacher could ask the observing child (say, of a pushing incident) to help them help the victim and focus more on the good they can do,” Jensen explains.

Should an injustice never be punished? The researchers agree that when consequences are warranted, they should be put in place. But they argue that punishment should take a back seat to shoring up innate kindness.

“[T]his has important implications for the evolution of cooperation,” says Jensen. His co-authors are Drs. Katrin Riedl, Michael Tomasello, and Josep Call, all from the Max Planck Institute for Evolutionary Anthropology, in Leipzig, Germany.

Jensens concludes: “The natural justice of younger kids is what we should nurture first.”