What do you look for in a community? How about helpful, giving residents—people who are eager to lend a hand? 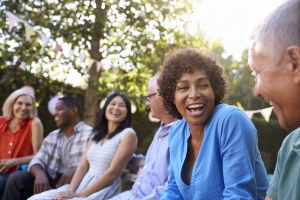 A research team led by Krishna Savani and Jared Nai of Singapore Management University reports people who live in such areas are more inclined to voluntarily help others. This reflects the fact that they are more likely to identify with all of humanity, and therefore “see the world as a family.”

And you never turn your back on your family, right?

As the researchers note in the Journal of Personality and Social Psychology, there are two schools of thought regarding the ramifications of racial diversity. One contends rubbing shoulders with people of different races opens minds and hearts, while the other suggests it creates distrust.

To test which is more accurate, they conducted five studies. In perhaps the most viscerally compelling, they analyzed a website the Boston Globe set up shortly after the 2013 marathon bombing. Bostonians used it to offer help to victims affected by the terrorist attack.

Sorting the 4,500 offers by zip code, the researchers found “people living in more racially diverse neighborhoods were more likely to offer to make their homes available” to bombing victims.

This association remained “even after controlling for distance from the bombing site,” they add. “It is not the case that people in neighborhoods closer to the bombing site were more likely to offer help because of their proximity, and these neighborhoods just happened to be more diverse.”

To discover the psychological underpinnings of this pattern (which was also found in two other studies), the researchers conducted another experiment featuring 517 Americans recruited online. The racial diversity of their home neighborhood was determined by noting their zip code.

To begin, they were asked whether they had helped out a stranger over the past month. They then answered a series of questions designed to determine the extent to which they identified with “all humans everywhere,” compared to fellow Americans, or residents of their neighborhood. (“Identify” was defined as the extent to which they “feel a part of, feel love toward, have concern for” specific categories of people.)

“Participants living in more diverse neighborhoods were more likely to identify with all of humanity,” the researchers report, “which explained why they were also more likely to report having helped a stranger in the past month.”

In the final study, 302 white Americans “were shown a picture of an American suburb with a row of houses, and asked to imagine that they were living in that suburb,” the researchers write. They were then shown photos of “six of their neighbors.” Half saw an all-white group, while the other viewed a racially diverse one, featuring white, black, Asian, and Latino residents.

All were then asked to imagine there had been a bomb blast during a parade in their neighborhood. They were asked how likely they would be to offer help to victims, including shelter, food, and transportation.

“Everything else being equal,” they conclude, “demographic shifts toward increasing diversity may increase people’s pro-sociality.”

These results are particularly interesting in light of recent research suggesting white flight from diversifying neighborhood is an ongoing reality. People making that move may feel safer, but this research suggests they are actually fleeing from their best selves.

This story originally appeared as “Residents of Racially Diverse Neighborhoods Are More Likely to Help Others” on Pacific Standard, an editorial partner site. Subscribe to the magazine in print and follow Pacific Standard on Twitter to support journalism in the public interest.