Two years ago, I published a report showing that schools in San Francisco were becoming increasingly segregated by race. In the public debate that followed, no one disputed the facts. However, I was struck by the apathetic, and even hostile, responses from many readers. 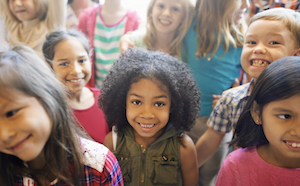 Some simply didn’t see the problem. “Folks will do what’s best for them and their kids,” commented one person. “They are not all that interested in partaking in your Utopian dreams.” Others seemed to feel that diversity and educational excellence were incompatible goals. As another reader wrote: “When the No. 1 Goal is Diversity, rather than excellence in science, mathematics, history, foreign languages, or even literacy you can understand why people leave America’s public schools in droves.”

These commentators apparently missed evidence in my report that, in fact, school integration went hand in hand with academic accomplishment. Several studies suggest it also leads to less racial prejudice and better life outcomes down the line, as the kids grow into adulthood. Now, a new, complex, wide-ranging study strengthens that case—and takes it one step further by revealing additional benefits for students of all ethnicities.

Jaana Juvonen and colleagues at the University of California, Los Angeles, studied 4,302 students in 26 middle schools across Southern California, one of the nation’s most diverse regions. The group of students was 41 percent Latino, 26 percent white, 18 percent Asian, and 15 percent African American, with the rest consisting of Pacific Islanders, Middle Easterners, and more.

Unlike previous studies, however, the researchers didn’t just look at schoolwide diversity. Instead, they drilled down to the classroom level, following the students from homeroom to history to math to English (which turned out to be crucial to the insights generated by their study).

Through a series of surveys, the researchers assessed sixth graders in three distinct emotional domains: feelings of safety at school, bullying and social exclusion, and loneliness. They also explored the students’ perceptions of fair and equal treatment by teachers, as well as how much the students wanted to associate with someone of a different race at the lunch table, basketball court, school bus, and so on.

The results? Students who enjoyed the most diversity in their classrooms throughout the day also scored the highest in each of these measures. In other words, as classrooms became more racially balanced, students felt safer, less bullied, and less lonely. They also tended to view teachers as fair and they sought out, rather than avoided, cross-race interactions at school. (In the study, the researchers controlled for factors like family income and parents’ education.)

Students of all ethnicities felt the advantages of diversity—but some more than others.

Compared to whites, African-American and Latino students felt safer at school and less lonely than peers in less-diverse classrooms. However, they were also more likely to feel victimized by other students, though the study’s methods couldn’t account for who was doing the teasing and bullying. The black and Latino students were also less likely to see teachers as fair than their white counterparts.

Note that black, Latino, and white students still benefited overall from school diversity—they just felt the benefits at different levels, on average. (There is little evidence that diversity actually hurts any group of students, though at least one study has found that black students can suffer lower self-esteem in certain situations.)

The study’s methods extended previous work by showing in-class diversity has a stronger impact on fairness and cross-race friendships than school-level diversity. In fact, schools that are internally segregated (even if they seem integrated from a distance) can actually experience more interracial tension and feelings of unfairness, as certain groups end up in gifted classes while others receive more remedial education. Other studies, note the researchers, have linked “racialized academic tracking” with in-school segregation—a pattern that the students almost certainly sense, as they look around at their classmates’ faces.

This has a practical implication for educators and education policy. In the past, school boards have tended to emphasize school integration, without looking too closely at what happens when the students get to class. “It may not be enough to focus on school diversity,” write Juvonen and her colleagues; it is just as important to make sure the classrooms themselves are diverse.

This insight also has implications for researchers, because “ignoring individual students’ diversity exposure within schools might lead to the erroneous conclusion that school diversity does not have positive effects on intergroup attitudes.”

My report on San Francisco schools highlighted a local manifestation of a national trend. According to a 2016 report from the U.S. Government Accounting Office, the number of highly segregated public schools has more than doubled since the start of the twenty-first century—and, perhaps not coincidentally, the United States has seen a steady uptick in racist invective and hate crimes during that period.

Is that the future we want? As this new study suggests, turning away from a commitment to racial diversity is almost certainly inflicting damage on our kids and our nation.