What does it mean to “love humanity”?

Several years ago, I invited people into the lab and asked for detailed descriptions of the last time they felt a love of humanity. They described a time that a friend had donated an organ to a stranger, an experience building homes with Habitat for Humanity, and a stranger who brought back a wallet.

A feeling of pride permeated these stories—a sentiment that said, I am one of these humans that can do good. They felt joy at being part of the human species—and we found that those momentary experiences of love of humanity left people motivated to do good themselves. It seems that when we identify with humanity, we are more likely to concern ourselves with others’ well-being. The reverse also appears to be true: people who frequently experience love of humanity have a stronger sense of being part of it.

Can we measure these qualities? Recently, psychologists Sam McFarland, Matthew Webb, and Derek Brown developed the Identification With All Humanity (IWAH) scale, which asks questions about how close, connected, affiliated, and concerned participants feel toward three groups: those in one’s immediate community, citizens of one’s own country, or people all over the world.

Here at the Greater Good Science Center, we turned this scientific scale into a quiz for our readers, which more than 2,000 people completed.

In analyzing the results, we found readers generally identified most strongly with people all over the world, followed by their community and then fellow citizens—which raises interesting questions about the values and experiences of our readers, and how those might shape their identities. We also asked demographic questions that allowed us to explore how key life details influence identification with humanity, country, and community. Here are some of the results. 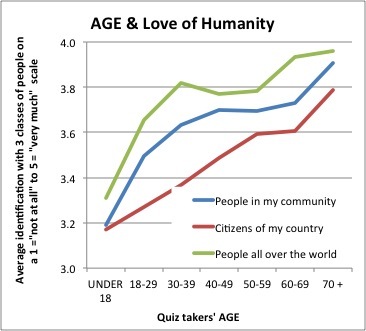 Older people have a greater sense of common humanity. Love of humanity (and also of country and community) increased throughout life until middle age, when it plateaued. But then growth resumed as participants neared 70, with the elderly reporting 20 percent stronger love toward people all over the world than those younger than 18.

What stunts identification with others for 40-60 year olds, most dramatically in the “all humans everywhere” category? Is this an age when preoccupations with career and family stall pro-social sentiments? Or is there something unique about those generations? This needs more study. But the overall lifetime trend is clear: As we age, it seems we come more and more to discover commonality with other people.

Women feel more common humanity than men (and they take more quizzes). Three times more women than men took our quiz, and women reported greater identification with all three groups on our five-point scale: community (3.7 vs. 3.5), country (3.5 vs. 3.2) and humanity (3.8 vs. 3.6). But before you put men on Mars and women on Venus, consider the fact that the pattern is the same for both sexes: highest for humanity, followed by community, then country. The real difference is that women seem to identify much more strongly with groups in general. Why might that be the case? This result points to a much bigger discussion about how women think about themselves in the love/care realm and the extent to which this is a function of the complex intersection between biology and acculturation. 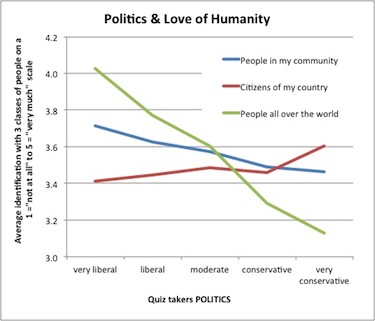 That said, of the people who completed the quiz, only 161 rated themselves as “conservative” or “very conservative,” suggesting that the population sample was biased toward liberal. This bias might reduce the impact of conservative viewpoints on the overall data. If there were equally as many conservatives who took the quiz, for example, would more conservative people show even greater willingness to identify with fellow citizens? But as is, the pattern of those 161 conservatives differs considerably from that of our liberal readers. 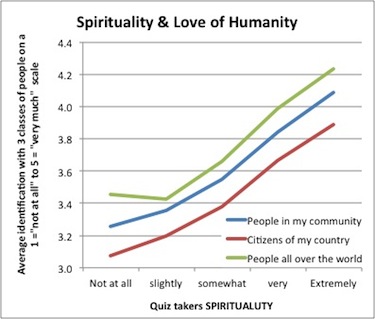 Spiritual people show more common humanity. In one of the most striking, consistent effects, self-reported spirituality strongly predicted the magnitude of identification with all three groups—community, country, and humanity. Why might this be the case? Many spiritual traditions explicitly advocate common humanity thinking and the “Golden Rule” (treat others as you wish to be treated)—and this might make it easier to consider all kinds of other people as “family.” Another factor to consider: Spirituality, as well as spiritual practices like prayer and meditation, are also associated with reduced stress and anxiety, and a greater sense of community. People have an easier time identifying with others when they are not stressed themselves, and when they feel enmeshed within a supportive community.

Race and geography don’t make much of a difference. Ethnic background did not predict systematic differences in strength of love toward community or humanity. However, when I collapsed together responses from all non-white quiz takers and compared those to white quiz takers (3/4 of the respondents), non-whites reported slightly greater love of fellow citizens.

Where people live had only a minor impact on how much they identify with people in their communities, country, or all over the world, although West coasters (a majority of respondents) showed significantly greater love of humanity than people from the Midwest.

Why do we love the world?

Taken together, our Love of Humanity quiz begins to paint a picture of a primarily female, liberal, white, fairly spiritual population’s willingness to identify with people all over the world, followed by people in their communities, and least with fellow citizens.

There is something idiosyncratic about the love of humanity exhibited by Greater Good readers, given the nature of the questions. Logically, one might think that Love of Humanity should be the lowest value, since it’s the biggest bucket. However, this may be a case where logic doesn’t explain human behavior as well as a more nuanced, psychological perspective that takes emotions and interpersonal sentiment into account. How and why is it that Greater Good readers identify less with fellow citizens and communities than with people all over the world? Is there something easier about saying that you feel connected to people all over the world than to people in your own community or country of citizenship? Do memories of conflicts or ideological disagreement factor into our identification with communities or fellow citizens, but not into thinking about people all over the world?

This is an area that we have only just started to investigate—and we’d love to hear your own responses to these questions in comments.