I’m a nature lover—there’s no doubt about it. Hiking is one of the great joys of my life and a surefire way to make me feel calmer and happier.

But I’m not spending as much time outside as I’d like to, and I’m probably not alone in this. 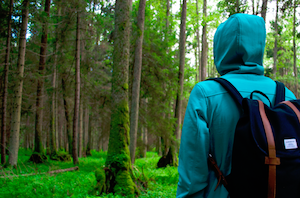 Since 2008, more than half of the world’s population has been living in urban settings; and, according to a Pew Research Center report, Internet use is way up, with almost 21 percent of Americans saying they spend time online “almost constantly.” These factors probably contribute to “nature deficit disorder” in me and other urban dwellers; but should I be worried?

According to journalist Florence Williams, the answer is a definitive yes. In her new book, The Nature Fix, she chronicles the research showing our intricate connection to the natural world and nature’s impact on our health, creativity, and happiness. She makes a strong case for incorporating more green spaces into our lives in order to improve personal and societal well-being.

Williams’s book is part travelogue, as she travels the world to interview scientists and policymakers taking a serious look at nature’s restorative powers. She talks with people studying “forest bathing” in Japan—a custom where people spend deliberate time in forests to reduce stress and improve cardiovascular health—and in South Korea, where researchers are treating young video game addicts with trips to the forest to help them feel happier, less anxious, and more optimistic. She looks at forest kindergartens in Germany, therapeutic wilderness experiences in the United States, and nature initiatives in Singapore to find out how these programs began as well as how they are being studied.

Time and again, scientists are finding out that being in nature has positive effects well beyond the expected.

Nature’s way of helping us

Beyond chronicling how nature provides positive benefits, though, Williams tries to answer the question of why that is. She interviews researchers studying the relationship between personal well-being and experiencing quiet (or low levels of noise), aromatic compounds in trees, and visual complexity in natural scenery. Each area of research provides some interesting insights, for sure. But one can’t help but feel like the scientists looking into these factors might be missing the forest for the trees.

Eventually, Williams comes to agree and starts to question the strategy of studying each separate aspect of nature on its own, like experiments where participants’ brains are monitored while looking at videos of nature and urban scenes, or where participants rate different recordings of bird songs for their restorative potential. She writes, “The intellectual compulsion to break apart the pieces of nature and examine them one by one” is “both interesting and troubling.”

In other words, there may be something about the holistic experience of nature that is restorative, beyond the sum of its individual parts. “We’re full sensory beings, or at least we were once built to be,” she writes. “Isn’t it possible that it’s only when you open all the doors—literally and figuratively—that the real magic happens?”

This insight leads Williams to focus on those researchers studying full-immersion experiences in nature rather than within a lab. For example, researchers in Finland found that even short walks in an urban park or wild forest were significantly more beneficial to stress relief than walks in an urban setting. And researchers at Stanford found that walks in a natural setting led to better moods, improved performance on memory tasks, and decreased rumination when compared to urban walks.

Similarly, having nature nearby seems to benefit our health. Researchers in England analyzed data from 40 million people and found that residents who lived in a neighborhood with nearby open, undeveloped land tended to develop fewer diseases and were less likely to die before age 65. Most significantly, this finding was not related to income levels, suggesting that green spaces may buffer against poverty-related stress. And nature experiences have been used to treat mental disorders, like PTSD and drug addiction, with some level of success.

Williams’s book is chock-full of interesting studies showing the benefits of immersion in nature—in particular, walking through it. This is music to the ears of hikers like me, who’ve long intuited a connection between walking in nature and clearer thinking, creativity, and resilience. Some studies in Williams’s book have been reported on before—for example, studies showing how nature restores our attention networks and produces feelings of awe that result in more kind and helpful behavior. But, to her credit, she provides details that are likely to entertain as well as placate skeptics, herself included.

Williams’s hope is that the book and the research it recounts may lead more people to get outside and get their “nature fix.” Similar to Michael Pollan’s three rules for eating, Williams distills what she’s learned into a simple prescription: “Go outside, often, sometimes in wild places. Bring friends or not. Breathe.”

I, for one, plan to take that advice to heart.