Leslie Keaton’s red brick home is on the edge of Chicago’s Ida B. Wells public housing project. Her back door opens onto a courtyard surrounded by nearly identical two-story build¬ings, boarded up windows all around.

But at Wells, Keaton has something some of her neighbors don’t: trees. A sturdy walnut tree rises from the concrete next to her stoop, with two rows of thinner trees in the courtyard. Her six-year-old neighbor Gerald and his two-year-old cousin Chilo race around them in plastic toy cars. 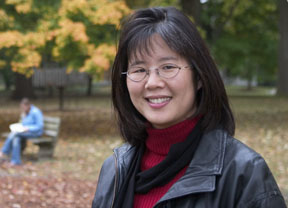 Two researchers at the University of Illinois, Urbana-Champaign believe the trees do more than provide shade around Wells in Chicago’s scorching summers. Frances Kuo and William Sullivan have found that trees may lower crime and improve residents’ mental health as well. At their Human-Environment Research Laboratory (HERL), Kuo and Sullivan have amassed a body of research around the connection between green spaces and people’s well-being. Chicago’s public housing projects are part of their testing ground.

When Kuo and Sullivan began their research here in the mid 1990s, Wells was one of the 12 poorest neighborhoods in the United States and housed about 5,700 people. Half of the families at Wells were on welfare and unemployment was over 90 percent. When Wells was built in the 1940s, the city planted trees around all the buildings. By the time Kuo and Sullivan arrived, many of these trees had since been pulled out and paved over for maintenance reasons, leaving some yards with trees and others barren.

Kuo and Sullivan ran a number of experiments here. In 2001, they found that residents reported being victim to half as many crimes in and around buildings with trees as around buildings without them. Kuo said that after other factors were excluded, such as the number of people per building, the amount of green cover explained seven to eight percent of the differences in crime between buildings. 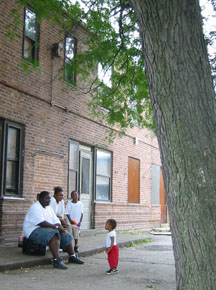 “It’s staggeringly high, given you expect it to be zero,” she said of the trees’ effect. “If most mayors could do something to reduce crime by that much, they’d jump at it.”

In fact, the city of Chicago used Kuo and Sullivan’s research in a decision to plant 20,000 trees around the city at a cost of $10 million several years ago.

As to why lush environments had lowered crime rates, Kuo and Sullivan suggest that green spaces draw people outside to enjoy them, and those increased numbers of people deter crime. In fact, they found that 83 percent more people socialized in green spaces at Wells than in barren spaces. And socializing can have long-term effects on crime prevention as well: Neighbors who are outside more form stronger bonds and communities, said Sullivan.

The researchers have found that green spaces have psychological benefits as well. In a study Kuo published in September with Andrea Faber Taylor, also of the HERL, they discovered that green spaces helped reduce the symptoms of children with attention-deficit/hyperactivity disorder (ADHD). The study, published in the American Journal of Public Health, analyzed parents’ observations of how their children behaved in different settings. The parents rated their children’s ability to remain focused on tasks, follow directions, and resist distractions.

The results showed that after spending time in green settings, like a park or a backyard, children had significantly fewer symptoms of ADHD than children in indoor or “built” outdoor areas like a down¬town area or parking lot. This finding held regardless of a child’s age or gender, parents’ income level, community size or location (rural or urban), or severity of ADHD. When children performed the same activity in a green setting and another outdoor or indoor location, their ADHD symptoms were consistently reduced only after their time in the green space.

Kuo said the study suggests a way to help children deal with ADHD—without the unwanted side effects of medication.

She added that she’s gotten positive feedback from parents of ADHD children after sharing her results with them. “They say, ‘Now we stop by a park and he’s so much better.’ People are building nature into their lives.”

And the mental health implications extend beyond children with ADHD. In their studies at Ida B. Wells and other public housing proj¬ects, Kuo and Sullivan found that a higher number of trees lowered residents’ mental fatigue and stress, factors that can contribute to violence. In a study at nearby Robert Taylor Homes, Kuo and Sullivan found that individuals’ aggression was lower if they lived in buildings surrounded by trees than if they did not. These people performed bet¬ter on cognitive tests as well.

A buildup of mental fatigue can cause people to feel stressed out and misinterpret social cues, leading to aggression and possibly vio¬lence, said Sullivan.

How greenery actually works to reduce stress and aggression remains something of a mystery, according to Kuo. But she speculates that green spaces affect the brain in a way similar to meditation, fos¬tering a “gentle engagement” that allows muscles to recover and relax. She said other leisure activities could have a similar effect, although some—most notably television—have been shown not to.

Despite their research, Kuo pointed out that schools are increasingly reducing recess because administrators think they don’t add value to the school day, while municipalities are asphalting over more playgrounds to save money. “There may be hidden costs to doing that,” she said.

Sullivan, who is currently analyzing crime data from several major cities relative to their greenery levels, is concerned that the urban tree canopy nationwide has decreased by at least a third in the last two decades. He said cash-strapped cities trying to improve public health and safety should consider investing in green neighborhoods rather than some other programs.

“We pour million of dollars into DARE (Drug Abuse Resistance Education),” Sullivan said. “But there are no comprehensive studies that show there’s a long-term decrease in drugs and alcohol abuse. We’re showing in multiple studies that green spaces have a significant impact on people’s lives.” To change the paradigm, Sullivan said every city, county, and state should incorporate green neighborhood spaces such as parks into their development plans. On a smaller level, planning agencies should show levels of greenery on their maps.

There are signs that more local governments are starting to notice the researchers’ work. Last year, the United States Conference of Mayors passed a resolution that recognized Kuo and Sullivan’s find¬ings and pledged to increase tree cover in urban areas. The researchers are talking to planning and design boards in different municipalities and to green advocacy groups in states like Georgia, Florida, and Washington. Their findings helped convince officials in Providence, Rhode Island, to add a zoning ordinance that increased the amount of tree cover on new properties, said John Campanini, technical advisor for the Rhode Island Tree Council, a tree advocacy group.

“They helped us enlighten people on the social benefit of trees,” he said.

Still, Kuo believes that she and Sullivan have more work to do.

“There’s a notion that (green spaces) are just frivolous and an amenity—urban forestry to mayors is first on the last list,” she said. “It’s really not seen as a necessary part of healthy human habitats. But I think that’s what our research is pointing to.”

I think we should all invest in refurbishing old buildings, for the sake of saving the environment. Here in Indiana, there are tax breaks for fixing up older buildings and turning them into apartments. Plus, it’s awesome, because they’re downtown!