It might be more important than you think to take that stroll in the park: A recent study suggests that walking in nature might actually benefit your brain.

The study, published in Psychological Science and conducted by University of Michigan researchers, found that when people spent time in nature, as opposed to an urban environment, their attention and memory improved. Thirty-eight students participated in the experiment, in which they had to listen to a string of numbers and then repeat them backwards. This task served as a measure of the participants' ability to focus their attention, and also tested their working memory. After completing this task, the participants were asked to walk through either downtown Ann Arbor or an arboretum equally distant from the campus. Once they returned, they performed the task again. 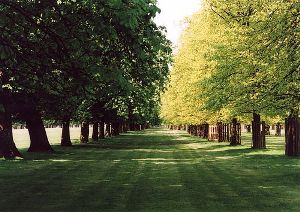 The results showed that participants performed significantly better on the attention and memory task after they walked through the arboretum. Participants also rated their walk through the park as more refreshing than the downtown walk. A second experiment in the study found that people even considered pictures of nature more refreshing and enjoyable than pictures of urban settings.

In explaining their results, the researchers cite a scientific theory that dates back to William James. This theory suggests there are two types of attention, involuntary attention and "directed attention," which requires more focus and cognitive control. The authors argue that nature captivates people's involuntary attention while allowing them to rest their directed attention, freeing up mental resources to concentrate on other things. On the other hand, urban settings are filled with stimuli that vie for one's attention and demand a reaction, from honking cars to giant advertisements.

The researchers encourage people to look at nature as not just an amenity, but a form of therapy—"a therapy that had no known side effects, was readily available, and could improve your cognitive functioning at zero cost."

On the note of the healing power of nature, I just skimmed an ad for “The Sacred Path Beyond Trauma: Reaching the Divine Through Nature’s Healing Symbol’s.” There is also research quoted in The Gift of ADHD on the healing benefits of grass versus cement in playground areas.

I have been meaning to take a walk in the park down the road from the office more often than I can remember, but never found the time. I’m taking that walk from now on as time well invested. I work from home too and in the middle of acres of land and trees; definately a break every hour or so from now on. Good for me and good for my work!

Great article. Everything in nature is in perfect balance and the energy that we feel when in nature allows us to feel more connected to nature and ourselves.

I leave home in the dark and get home in the dark from work but try to make a point of getting into the garden & found it is even better to heighten your sense of smell, sound and touch when it is dark.  Try it sometime it made me appreciate my senses that much more!

Does every thing have to be researched?

Can’t we find out for ourselves what is good for us?

I have used a walk in the wilderness all my life to solve tricky problems, to draw inspiration for some creative effort, to understand the mysteries of nature and also to feel one with the world whenever I feel lost.

I have recommended it to many people, who initially scoffed at the suggestion and finally used to good advantage, when other things did not work for them.

The beauty of a walk is that it is a unique experience for every one.

Love the article, but this same has been repeated so many times over the last 20 years it is becoming old news.  I had high hopes that rigorous research would change lifestyles, but I’ll have to agree with ganoba and say that the only thing that works is to get people out there doing it.  On the other hand, that is a type of research as well…
——-