You clicked with them. 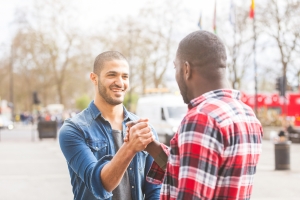 It can happen whether you’re shy or outgoing, whether the topic of conversation is one you’re into or one you’re barely familiar with. But the experience of clicking is unforgettable. Everything the other person says resonates with you. Your speech rhythms match. Conversation flows like rushing water, unimpeded by a single awkward silence and unruffled by even a moment of annoyance, puzzlement, or misunderstanding: the social equivalent of a flawless, gold-medal ski run.

The experience of clicking can seem, in short, near-miraculous…which is just the sort of challenge neuroscientists like. Insinuating that something can’t be explained has the same kind of effect on researchers as waving a red flag in front of a bull. Of course they’re going to hunt for the neurobiological underpinnings of clicking, and 2018 is shaping up to be a banner year for that.

If clicking with someone feels like you’re “on the same wavelength,” it turns out there’s a good reason for that. In what’s called “interpersonal synchronization,” people click in an unspoken meeting of the minds about how long to linger before a museum painting or when to get up from the coffeehouse table. Such synchrony occurs when an overheard remark triggers in both of you a simultaneously raised eyebrow, when what you see on your companion’s face reflects the feelings and thoughts inside your own brain. Your body language matches, what catches your attention catches his, you become impatient at the same time about the same things.

In a 2018 study of one version of syncing, neuroscientist Pavel Goldstein of the University of Colorado Boulder and colleagues enlisted 22 heterosexual couples, ages 23 to 32, and administered mildly painful heat on each woman’s arm. As her partner offered comfort and sympathy, the researchers measured brain activity in each partner.

Simply being in each other’s presence caused their brain waves to sync, as measured by EEG, particularly in wavelengths called the alpha–mu band. These brain waves are a mark of focused attention. Each couple was in sync, mirroring one another neurologically in terms of what they were focusing on—her pain, his efforts to comfort her (maybe second thoughts about volunteering for scientific experiments). When the man and woman held hands while she experienced the mild burn, synchrony, or what scientists call “brain-to-brain coupling,” reached its zenith.

Seeing someone you love suffer is (hopefully) an unusual experience, but neural synchrony occurs in mundane situations, as well. In a 2018 study, 42 volunteers watched short video clips (ranging from America’s Funniest Home Videos to an astronaut discussing seeing Earth from space, journalists debating a Barack Obama speech, and a homemade wedding film) while scientists measured their brain activity with fMRI. The scientists had previously mapped everyone’s social network, noting who was whose friend, who was a friend of a friend, who was a friend twice removed, and so forth.

Brain activity while viewing the clips was “exceptionally similar among friends,” said psychologist Thalia Wheatley of Dartmouth College, who led the study. “But that similarity decreases with increasing distance in the social network.” In other words, friends were most similar in their patterns of neural activity, followed by friends of friends, and then friends of friends of friends. Those neural patterns, Wheatley said, suggest that “we are exceptionally similar to our friends in how we perceive and respond to the world around us. You click more with friends than with non-friends, which fits with our intuition that we resonate with some people more than others. There seem to be neurobiological reasons for that.”

The brain regions with the most similar activity among friends included subcortical areas such as the nucleus accumbens and the amygdala, which are involved in motivation and processing emotions. There was also remarkable similarity in areas involved in deciding what to pay attention to, and regions in the inferior parietal lobe that have been linked to discerning others’ mental states, processing the narrative content of stories, and generally making sense of the world.

Wheatley calls it neural homophily (the idea that like befriends like). Responding to the world in a similar way, as measured by brain activity, underlies the phenomenon of clicking: It’s why you and that stranger at a party or assigned roommate laugh at the same things, want to chat endlessly about the same topic, and see the logic in the same argument. If two people interpret and respond to the world in similar ways, they’re easily able to predict one another’s thoughts and actions, Wheatley said. This increased predictability makes it easier to interact and communicate, which makes conversations and shared experiences more enjoyable. It also makes friendships more likely.

But homophily also describes how birds of a feather flock together, where the “feathers” are things like age, ethnicity, and education level: People tend to become friends with those of the same demographic characteristics. That raises the question of whether demographic traits cause particular neural patterns. If so, then similar brain-activity patterns in friends would simply be the result of people with similar education levels, ethnicities, and other traits—perhaps including ideological beliefs, recreational interests, and cultural preferences—gravitating toward one another. In other words, maybe those traits made people friends, and the neural activity was secondary, a mere bystander to the actual cause.

The scientists knew they had to settle that, and they think they did. Wheatley and her colleagues used standard statistical techniques to measure whether neural patterns were a so-called independent variable, not a mere reflection of something else (such as a demographic variable). They were. Even when controlling for similarities in age, gender, nationality, and ethnicity, brain-activity patterns were more similar between friends than friends of friends and greater-degrees-of-separation friends. “All of these were less predictive of friendship than neural response,” Wheatley said.

There’s a chicken-and-egg problem, however: Which came first, clicking due to neural synchrony or friendship? “We can’t tease those two possibilities apart because our study looked at only one moment in time,” Wheatley said. “Only a longitudinal study could tell us” whether people seek out (probably unconsciously) those with similar neural patterns and become friends, or whether friendship causes people’s neural patterns to become more similar. She is conducting further studies to see whether shared experience drives neural similarity. In this case, people who are thrown together by forces beyond their control (like the roommate assignment lottery), and don’t initially see the world in the same way, come to do so and go on to adopt other people’s views.

Alternatively, “Maybe we look for people who are just like us in how they perceive and respond to the world, and find ourselves in an echo chamber,” Wheatley said. She also plans to study strangers, measure their neurological responses to video clips, and see if similarity predicts whether they become friends when they meet.

The emerging understanding of clicking might shed light on some social mysteries. People whose conversations with strangers and even acquaintances are riddled with awkward silences might have neural patterns that are out of sync with almost everyone else’s. They don’t find the same things interesting, their attention rarely lands where others’ does, and as a result they don’t click. (This describes some people on the autism spectrum, but clicking has not been specifically studied in this population.)

Short of connecting brains with electrodes to sync their activity, there might be a way to increase your chances of clicking. We feel more connected with people whose postures, vocal rhythms, facial expressions, and even eyeblinks match our own. Maybe clicking can be triggered from the outside in: Consciously sync the actions you can control—posture, expression, and the like—with other people’s, and your brain activity may follow. Click.

The complex things we do together—playing soccer, architecture, creating the internet, not to mention simply getting along—require us to quickly coordinate our actions. According to a paper in Trends in Cognitive Science in 2012 by Uri Hasson and colleagues, “Despite the central role of other individuals in shaping our minds, most cognitive studies focus on processes that occur within a single individual.” They called for a shift “from a single-brain to a multi-brain frame of reference.” They argued that we transmit signals that allow the neural processes in one brain to couple to those in another, creating a social network that leads to “complex joint behaviors that could not have emerged in isolation.”

This article was originally published in the August issue of Mindful magazine. Read the original article.