Making friends can be daunting, something I recently found out after moving to a new city. You might hit it off with an acquaintance, but what’s the next step? And how long does it take to move past “getting to know you”? Unfortunately, there’s no manual for this crucial life skill.

But University of Kansas researcher Jeffrey A. Hall has helped demystify the process of friendship-building in a new study published in the Journal of Social and Personal Relationships. It’s the first to explore not just what activities bring us closer to prospective buddies, but exactly how many hours it takes for an acquaintance to become a friend. 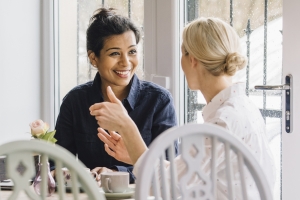 Hall surveyed 112 college students every three weeks during their first nine weeks at a Midwestern university. He also gave a one-time questionnaire to 355 American adults who had moved to a new city in the past six months. In these surveys, the newcomers picked a friend or two and reported how much time they spend together, what activities they do, and how close the friendship is (how emotionally close and committed they feel, and how much they admire their friend’s unique traits).

Unsurprisingly, the more time two people spent together, the closer their relationship. Through his analysis, Hall was able to approximate how many hours it took for different levels of friendship to emerge:

“Everyone wants to have friends, but you can’t have friends without making them,” says Hall. “Making friends takes time.”

Why does it take adults so much more time to make friends than students? Hall speculates that there might be something about student life that facilitates friendship—perhaps the close quarters of college living fosters fast connections. It could also be that college students overestimate how deep their friendships are.

But time on its own does not breed intimacy. It depends how we spend that time, as Hall found when he analyzed what activities friends did together.

Talking, it turns out, can be hit or miss. In general, spending more time talking didn’t make student or adult friends feel closer. But student friends did tend to be chummier when they engaged in certain types of talking—namely, catching up about their lives, talking playfully, having serious conversations, and showing love, attention, and affection. Student friends who engaged in small talk—about current events, pets, sports, movies, or music—actually tended to become more distant over time.

Shared activities don’t always help us bond, either. For study participants, spending time together on shared interests or projects—such as traveling or exercising, partying or shopping, joining teams or groups, or going to church—didn’t seem to move the needle on feelings of closeness. Nor did spending time together at work or school, places you’re obligated to be anyway. But a few activities were more common in closer friendships: relaxing and hanging out and (for adults) watching movies and playing video games.

In other words, much as we might wish for one, there may be no set formula for making a friend.

Ultimately, this research underscores that friendship is an investment. Time spent with one potential comrade is time you can’t spend with another, and those hours matter. For students who were able to turn an acquaintance into a casual friend or a friend into a good friend during the study, they (on average) doubled their number of hours in that person’s company. Meanwhile, they spent half as much time with other friends, and those friendships didn’t evolve.

“You have to work on the ones that count,” says Hall. “Time spent together, especially leisure time, can be thought of as an investment toward future returns on [satisfying our need for belonging].”

That investment can take months, as I saw firsthand. As Hall points out, friendship isn’t a one-sided endeavor. Some connections will peter out, while others will flourish—and it’s not always in our control.