Many people I know have experienced what is often jokingly referred to as a “midlife crisis.” Somewhere around the time their kids leave home or they find themselves in mid career, they start questioning the trajectory of their lives, wondering if they’re satisfied with their relationships, their jobs, their level of adventure, or their spirituality. 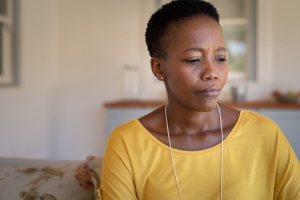 A midlife crisis is actually no laughing matter. The difference between our expectations for ourselves and what life actually holds for us often leads to disappointment and, in some cases, despair. In fact, “deaths of despair” in midlife—by suicide, drug overdoses, and alcohol abuse—are on the rise, at least in the United States.

According to new research, the United States isn’t the only place where midlife is so hard. Studying 132 countries around the world, labor economist and researcher David Blanchflower found strong evidence that people’s happiness forms a U shape over their lifetime, hitting its lowest point in midlife.

In the paper, Blanchflower reviewed large data sets from every continent but Antarctica. He drew from studies that focused on many measures of happiness, including life satisfaction, mood, pain, and more. He ran analyses that took into account factors that might impact happiness—such as health, income, employment, being married, being a parent, and more—then ran the analysis again not taking these into account.

In each case, he found that people’s happiness rose and fell in a U-shaped curve, and that it hit a low around the ages of 47 and 49. The consistency of this result surprised him.

“The expectation was that I probably wouldn’t find that this [dip in happiness] was the same everywhere; but it’s present in America, Germany, Thailand, Pakistan, everywhere,” he says. “Even in countries with a lower life expectancy, where you might’ve thought that it would be pretty different, it turns out it’s not. There’s an empirical regularity in the data from around the world, for millions of people.”

Why would that be? No one really knows, says Blanchflower; but researchers are trying to figure it out. The fact that apes also experience this drop in midlife points to a possible biological origin, perhaps with some evolutionary advantage. Feeling down in midlife could be nature’s way of spurring us to take action that extends our chances of survival or helps our communities.

With few exceptions, other research has uncovered the same pattern—where happiness is generally high in young adulthood, starts to decline slowly until reaching a low point around our late 40s, and then rises again. In his book The Happiness Curve, author Jonathan Rauch writes, “The happiness curve would not show up in as many data sets and places as it does, including among apes, if it were not to some extent hardwired.”

But that doesn’t mean social and psychological factors aren’t coming into play, too.

Blanchflower speculates that the happiness dip in individuals may have to do with “getting real”—finding their dreams for themselves aren’t coming to fruition, which can be a harsh reality check. Plus, in our social-media-rich lives, where everyone appears to be doing better than us, it’s easy to feel inferior to others—something that can wreak havoc on happiness at any age, but may be particularly problematic in midlife.

Of course, midlife self-reflection can be a good thing if it leads us to make positive changes. But, if we focus only on the negative and become disillusioned, we may find ourselves ending relationships or making rash decisions to alter our lives in ways that aren’t good for our well-being…especially if they don’t get at the root of our dissatisfaction.

What can we do to protect ourselves? Blanchflower believes that being around other people and finding community can help. Loneliness is painful at any age, he says; but being around friends and family, joining clubs, and connecting with our neighbors can help us cope. Or, if that’s not enough, you may want to see a therapist.

Still, it shouldn’t be all up to individuals, he says. Despair-related deaths are higher in the U.S. than in Europe—despite Europe’s much larger population—suggesting that something particularly problematic is happening in America. Blanchflower suggests it may be our lack of social and economic support for those who need it.

“In the U.S., the lack of jobs, the lack of hope, the lack of a future, and the lack of access to health care—all of that has had particularly bad effects for those suffering economically,” says Blanchflower. “Here we emphasize individualism; but we should be reaching out more to those who are lonely or going through tough times and encouraging more togetherness.”

In the meantime, it’s good to know this midlife plunge in happiness usually turns itself around once we get a little older—perhaps because we have more perspective or we start prioritizing our relationships more. But understanding the trend is important in dealing with it.

“It helps to know that you aren’t alone and that it’s probably going to get better,” Blanchflower says.