My Grandma Kathleen has always seemed like the wisest person in the world to me. No matter what problems I’ve encountered, she’s always encouraged me to concentrate on the positive and never hold a grudge. “I don’t have to like everyone,” she says, “but I still have to love them.”

I often wonder how she can stay so upbeat. But a recent study offers a simple explanation: She’s over 50. 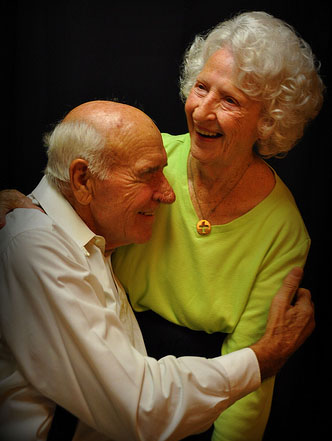 The study, published in the Proceedings of the National Academy of Sciences, examined people’s psychological well-being over the lifespan, finding that people generally get happier as they get older.

Researchers analyzed phone surveys of more than 340,000 participants, ages 18 to 85. The participants first placed themselves on an imaginary ladder, indicating to what extent they felt they were living their “best possible life.” Then they reported whether they had experienced a great deal of any particular emotion—worry, stress, enjoyment, sadness, anger, or happiness—the previous day.

The results paint a clear picture of how our well-being changes as we age. Anger, stress, and worry drop significantly around age 50, while sadness stays relatively stable over the lifespan. Enjoyment and happiness drop during middle-age but then rise after 50, to levels felt at age 20. The groups who most felt they were living their best possible life were 18 to 21 year olds and those 70 and above.

Most surprising to the researchers was that age was so strongly related to happiness while many other seemingly important factors—gender, employment status, romantic relationships, having children under 18 living in the home—were not. So why might old age bring us happiness?

Arthur Stone, the study’s lead author and a professor of psychiatry at Stony Brook University, suggests a possible cause may be the different ways old and young people choose to spend their time.

“Younger people may have a tendency to make decisions that will positively impact their future,” he says, “but this may be at the expense of their current well-being.”

For example, a younger person may decide to enroll in an expensive and challenging graduate program in order to get a better career later in life. By contrast, says Stone, “older folks are more likely to make decisions that bring them more immediate joy because they have an outlook that is not so future-oriented.”

Even if you’re decades from reaching your prime happiness years, the study still offers an encouraging takeaway. Though those of us under 50 experience more negative emotions each day than our older counterparts, we also enjoy two to three times more happy moments than negative ones.

Previous research, including studies conducted by psychologist Barbara Fredrickson, has shown that savoring and internalizing momentary happiness and positive emotions can have lasting effects on our well-being, building resilience and reducing the effects of stress on the body. So it seems that if we can all learn to pay more attention to those joyful times, we might be as happy and wise as our grandparents.

I simply love this article! I’m 62 and would like to add that when you get to a certain age, you realize that getting angry, worrying and stressing out over situations don’t make them better and it sure doesn’t send them away. We tend to pray a lot and leave the details to God!