Old age may bring aches and pains, but new research suggests it can also bring happiness. According to a study published in the April issue of the American Sociological Review, people get happier as they get older.

Yang Yang, a University of Chicago sociologist, looked at data collected periodically between 1972 and 2004, surveying nearly 30,000 people, ages 18 to 88. Those people were primarily white and African-American, from various walks of life. 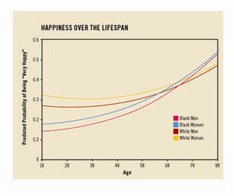 Yang found that at every year the survey was conducted, older Americans reported being happier than younger ones. More specifically, for every 10 years that someone aged, by five percent.

Many of Yang’s findings expand on what previous research has shown about happiness. Consistent with other studies, for instance, she found that women were generally happier than men. However, according to Yang’s study, this gender difference declines significantly as people get older, with men becoming nearly as happy as women. Yang attributes this partly to the fact that older women are more likely to be widowed than older men. In general, she found that widowed people are about 70 percent less likely to be happy than married people, happier than blacks at most stages of life, but blacks reported being happier than whites after around the age of 70.

In trying to explain this finding, Yang says it might suggest that financial resources and social status are less important to people as they reach old age: Younger whites may be happier than younger blacks because whites generally have higher incomes, and Yang found that people with low incomes were significantly less happy than people with moderate or high incomes. But if financial status matters less to people as they age, those disparities in income would no longer produce disparities in happiness.

Trying to explain the general differences in happiness between older and younger people, Yang speculates that older people may be happier because, according to previous research, they’re more likely to compare themselves to the less advantaged, which might make them feel better about their own lot in life. She also considers that older people may have “smaller discrepancies between aspiration and achievement.” In other words, they may have lowered their expectations for life and come to appreciate all they’ve achieved, rather than dwelling on unfulfilled goals.