Everyone reacts differently to stressful events, but new research, published last week in the Journal of Gerontology: Psychological Sciences, shows that our outlook on aging could affect how we deal with the stress of daily life.

Past research on how older adults react to stress has produced a mixed bag of results, according to Jennifer Bellingtier, a Ph.D. student at North Carolina State University, and lead author on the new study. Some studies show that older individuals handle stress better compared to their younger peers, while others find older adults are worse off. Some show that both groups fare about the same. “We thought aging attitudes could be a factor that explains why these results are all over the place,” Bellingtier says. 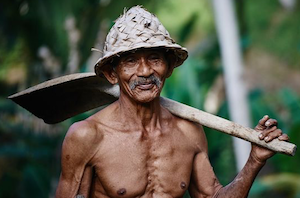 “The research base is definitely building that it’s important to have positive attitudes toward aging,” she explains. Adults who hold a more negative view of aging report lower levels of life satisfaction, well-being, and social supports, and they’re more likely to be hospitalized or to die young.

To find out if aging attitudes could also influence stress responses day to day, the researchers sent nine days’ worth of surveys to 43 adults between 60 and 96 years old. On day one, the survey assessed participants’ general attitudes toward aging (“I am as happy now as I was when I was younger,” for example). For the remaining eight days, participants filled out surveys before bed about any stressful events — such as disagreements or health problems — and their moods.

As the team predicted, stressful events had little effect on the moods of adults with positive attitudes toward aging. On the other hand, participants with more negative views about aging had stronger emotional reactions to daily stressors.

The takeaway, according to Bellingtier, is that it’s not just hypothetical, future events like hospitalizations that attitude can influence. “What we’re adding is that it’s also affecting how you respond to daily life,” Bellingtier says. “It’s going to affect you right now.”

There are, however, several factors that affect the generalizability of these results. The participants were mostly women, and the study group was relatively small (though Bellingtier notes that the team has nine data points for almost every participant, which makes the data set more statistically powerful than other studies with a similarly small sample size). Additionally, all the study participants were from the United States.

“When you’re looking at aging attitudes, those are always in a cultural context,” Bellingtier says. In the U.S., growing older is not typically seen as a positive thing; in the media, for example, older adults tend to be portrayed as a burden or the butt of jokes. Many other cultures view their elders as wise and worthy of respect. More research is needed to find out if those attitudes protect older adults in other cultures from day-to-day stress as well.