We’re in a laboratory with a three-year-old child. As part of the experiment, we ask the child to share her colorful stickers with a puppet—but she doesn’t do so fairly. For the researcher, this is completely expected and developmentally appropriate. But for the parent who is watching, it’s just embarrassing. 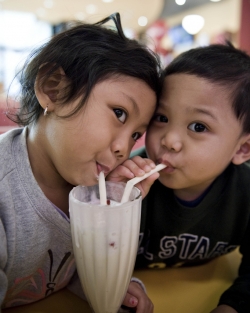 Afterward, the parent wants to let us know we may be underestimating his child’s sophistication. “She talks about sharing all the time at home!” he says. “But I guess she doesn’t quite get it.”

This is a very common experience for development psychology researchers—and for parents, who might be awe-struck one moment by the child’s moral concern for others, only to witness her failing to display the same behavior moments later.

So, who is right in these cases? The parent who has spent countless hours with their young child and surely grasps the inner workings of his or her mind better than any other adult, or the researcher, who just conducted a standardized study protocol aimed at uncovering an unbiased understanding of these young minds?

Our answer is that they’re both right, and the reason why is not as obvious as we might think.

A few years ago, researchers Craig Smith, Peter Blake, and Paul Harris pointed out a paradox in young children’s reasoning about fairness—despite the fact that preschool-aged children often know they should share their resources equally, they end up failing to do so. At first, such a tendency appears irrational: If I know I should share with my friends, why wouldn’t I do so? Perhaps children are moral hypocrites, who know the right things to say but, when push comes to shove, don’t really want to do any of them. Do as I say, not as I do, right?

But while this explanation isn’t wrong, per se, we think it ascribes too many Machiavellian motives to young children. Our recent work finds that one of the reasons young children fail to share when they know they should is that they simply lack the cognitive toolbox to do so. In particular, children’s underdeveloped counting skills play a role in their ability to distribute resources fairly. In other words, it’s not that they don’t want to share. It’s that they don’t yet understand how to share fairly.

During the preschool years, children go through several important developments that might affect their sharing behavior. First, they learn how to recite the count list properly (“one,” “two,” “three”…). Then, they start attaching meanings to the words they’re reciting—when you ask a three-year-old for two apples, they learn to bring you two and only two. And finally, they jump not just to understanding the specific words, “one,” “two,” and “three,” but to understanding some basic principles of counting, and even when to implement them. At this point, if you put 10 items in front of a child, she can use her counting skills to work out how many there are.

These skills aren’t just the foundation for later math learning, they’re also critical for understanding how to share, our work suggests.

In our first study, we presented a group of preschoolers with two simple sharing tasks. In both, we gave the children a set of attractive stickers and we introduced them to a sad puppet who also wanted the stickers. So, children were faced with a dilemma: Do I keep these awesome stickers or share them with this poor puppet? 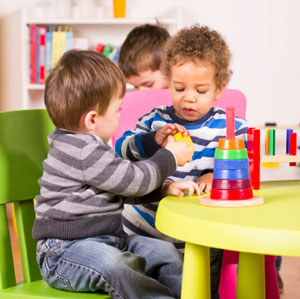 We recorded how they resolved it (how many stickers they gave). Afterwards, we tested children on their counting skills, which helped us classify children as either proficient counters (those who knew the basic counting principles, referred to as Cardinal Principle Knowers), or non-counters (those who, at most, knew just meanings of specific number words such as “one”, “two,” and “three,” referred to as Subset Knowers).

Not surprisingly, older children (four and five year olds) were more likely to resolve the dilemma equitably: They would give exactly one half to themselves and give away one half to the puppet. In contrast, the younger children (two to three years old) were less likely to succeed in sharing equally.

What might explain this difference we found between older and younger children? Perhaps as children got older, they simply learned that they should be sharing these stickers in half. But that didn’t seem to be the case: Children regardless of age and regardless of what they actually did ended up saying they “gave the same” amount of stickers to each, suggesting they already knew at the youngest ages that this was something they should do.

Instead, we found, the ability to actually be fair—to divide the stickers equally—was explained by children’s counting skills. Cardinal Principle Knowers (proficient counters) were about twice as likely to share fairly as Subset Knowers (non-counters). Importantly, once we accounted for children’s counting skills, age failed to predict children’s tendencies to share equally. In other words, a three year old who knows how to count would be much more likely to share fairly than a five year old who doesn’t.

Most kids want to be fair

What about children who weren’t sharing equally? Were they simply selfish or were they mistaken about how to be fair?

If children truly are moral hypocrites driven by selfish motivations, we’d expect them to keep most of the stickers for themselves. But if, instead, they simply didn’t have the ability to share fairly, they should be just as likely to be selfish as generous: Sometimes they’d make a mistake by overshooting (and giving more than they needed to) and other times by undershooting (and giving less).

That is exactly what we found—about half of the children “selfishly” kept the majority of the stickers, but the other half were actually overly “generous,” probably not realizing what they were doing in either case. We take this to mean that many children were actually trying to be fair—but couldn’t do it on account of their underdeveloped counting skills.

We also wanted to see if maybe children without the needed counting skills just aren’t aware that they ought to share equally.

So, we ran a follow-up study showing two to five year olds potential ways to share candies between themselves and someone else: one way was selfish, the second was fair. All children had to do was point to how the sharing ought to be done. We again measured their counting skills afterwards.

Most children chose the “fair” or equal option, suggesting that they understood they should share fairly. Of course, there was a little bit of improvement with age: the older children were, the more likely they were to claim that they should be fair, but counting skills had nothing to do with this development. Counting helps explain children’s sharing behaviors, but not their knowledge when it comes to fairness.

In other words, children know they should share fairly, but they can’t actually do it until they learn to count.

Why would sharing be related to counting? Besides the obvious—that children can’t share the proper number if they don’t also know how to count it—prior research by Muldoon, Lewis, and Berridge pointed out that the concept of set equivalence (understanding when two things are equal to one another) is tied to understanding counting in the first place.

But there might be other reasons. For one thing, perhaps counting gives children an extra tool to double-check their mistakes: I might randomly divide a bowl of strawberries so that both of my children have about the same, but with counting, I can definitely make sure that it’s the same. And in fact, in our study, children who shared equally seemed much more aware of how many stickers they’d given each person, suggesting that maybe counting was helping them keep track in a much more precise way.

So, can we conclude that children are entirely morally virtuous, just waiting for the opportunity to show their remarkable sharing skills as soon as they understand counting? Not quite. There are many instances, especially ones in which children are taxed in other ways (e.g., having to donate to strangers rather than trusted friends) in which children are inclined to be selfish. Lots of work supports this.

But before concluding that a toddler is just being stubbornly selfish when he doesn’t share the way you’d hoped, we urge people to consider what other types of things the child does and doesn’t know yet—and interpret that behavior accordingly.