People have a strong drive to share experiences with others. This is true in situations where interactions between people are minimal, such as watching a film with a friend at a movie theater, and is especially true in emotional situations like in the aftermath of a natural disaster. 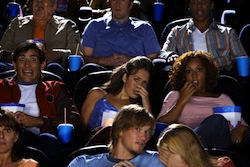 Why do people have this drive? Results from a recent study suggest that just knowing that a friend is going through the same emotional situation we are makes us feel better than we would if we experienced the situation alone.

In their study, published last month in the journal SCAN, Ullrich Wagner and colleagues asked pairs of female friends to view a series of pictures. Each picture was either emotionally positive, emotionally negative, or neutral. One friend looked at the pictures within a magnetic resonance imaging (MRI) scanner while the other performed the experiment simultaneously in an adjacent room. Before each picture popped on the screen, participants were told whether or not their friend was seeing the same picture in the next room. (The friends were actually viewing all the same pictures at the same time regardless of what they were told.)

After viewing each picture, the participants rated how positive or negative they felt.

The participants reported feeling significantly more positive when they were told their friend was viewing the same emotional picture. This so-called “sharing effect” was true for both positive and negative pictures. This means that happy pictures made participants feel even happier when they felt they had shared that experience with a friend. And participants felt less sad seeing a sad picture when they thought their friend was viewing it too. (There was also a slight, but not significant, sharing effect for the neutral pictures.)

When researchers told participants in the scanner that their friend was viewing the same emotional picture, they saw increased activity in two parts of the brain’s reward circuitry—the ventral striatum and medial orbitofrontal cortex—compared to when the participants were told their friend was not viewing the same picture. This suggests that simply sharing an emotional experience with a friend may activate the brain’s reward system. It also squares with the participants’ reports of feeling more positive about shared experiences.

Participants also rated how strongly they identified with a series of statements during the experiment. Some statements related to their awareness of their friend, such as, “I was aware of my friend’s presence” and “I was wondering how she was feeling while seeing the pictures,” while others related to their intentions to communicate with their friend, such as, “I had the urge to talk about the pictures with her” or, “I imagined how we would talk about the pictures after the experiment.”

The results from this study may help explain why friends seek each other out in emotional situations, regardless of whether the situation is sad—like attending a funeral—or happy, like celebrating a promotion. As the authors write, “Sharing exposure to emotional stimuli with a friend buffers the impact of negative stimuli and enhances the impact of positive stimuli.”

So the next time you want to watch a tear-jerker, you may want to consider bringing a friend along (or even have them watch it simultaneously elsewhere). The movie might not feel quite as sad when shared with a friend.