I recently stumbled upon a reinvention of one of my favorite childhood candies, the fruit chew. Eating one, I am eight years old again. I remember keeping all the cherry and strawberry squares for myself and sharing the less-desirable lemon and orange squares with my sisters—if I shared at all.

Could my parents have done anything to encourage me to be more generous? New research says yes. 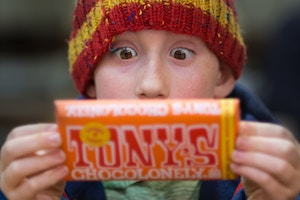 Kids are more likely to share in certain conditions, suggests a recent study—using fruit chews!—of four- to nine-year-olds by Katherine McAuliffe and colleagues.

As you might expect, kids who didn’t hear any suggestion about what to share were not as selfish as the kids who heard the suggestion to only give a small fraction of their fruit chews.

But are kids more responsive to cues from adults—or from other kids? In a different study, Azzura Ruggeri and colleagues presented a similar dilemma—deciding how many chocolates to share—to nine- and 12-year-old kids in various circumstances. The result? Nine-year-olds were more influenced by adults than peers, but the opposite was true for the group that was entering adolescence—the 12-year-olds exerted more influence on each other than adults did.

This alignment starts to develop at an earlier age, according to yet another recent study by Markus Paulus and Chris Moore of three- to six-year-olds. They found that kids expected to be happier when they decided to share than when they decided not to share.

They also found that kids who felt sadder when they didn’t share gave more generously during later opportunities to share compared to kids who felt less sad. According to Paulus and Moore, these findings may explain one possible motivation for kids to share: anticipating a “warm glow” feeling that comes with being generous.

What could these findings mean for parenting?

Taken together, these findings suggest some fairly specific guidelines for parents when encouraging kids to share.

Parents can influence kids’ decisions about giving—but they shouldn’t take it too far.

Kids respond to clearly stated, gentle suggestions about what is acceptable when it comes to sharing. In the study above, researchers framed their generous or selfish suggestions to kids by saying, “Most kids give…”

Kids are also more amenable to suggestions that match what they already believe to be appropriate. Encouraging them to share beyond a 50/50 arrangement may cross into unfair territory. Recognizing upper bounds when setting the bar helps parents anticipate their kids’ generosity.

Sharing behavior changes as we age. Acknowledging age differences helps parents set appropriate and achievable expectations for their kids. Keeping in mind that it’s easier to persuade younger kids to be selfish and older kids to be generous helps parents align their goals with their kids’ development.

How does the child feel right then?

Parent-child discussions about giving that involve modeling how to talk about and label emotions may enrich kids’ vocabulary about feelings, which may in turn promote greater awareness of themselves and others. This may give kids opportunities to interpret and internalize the impact of their and others’ generosity—for example, noticing the positive emotions that giving may encourage in the giver and the recipient, and perhaps some of the negative emotions that deter from giving. Parents noticing and expressing praise for their kids’ and others’ acts of generosity have the potential to reinforce their kids’ decisions to share.

So, would I have shared more fruit chews if my parents had applied these insights? Perhaps not right at that moment, but down the line—yes, I think it would have had an impact. These days, I hardly ever keep all the candies to myself!