How can you reduce stress and blood pressure while pregnant? New research shows that a sense of community can help.

Despite advances in prenatal care and lifesaving neonatal units, the United States ranks 40th in the world in preventing maternal deaths. Pregnant women are most likely to have health problems if they are of low socioeconomic status or are members of ethnic minority groups; stress and high blood pressure cause many of these problems. 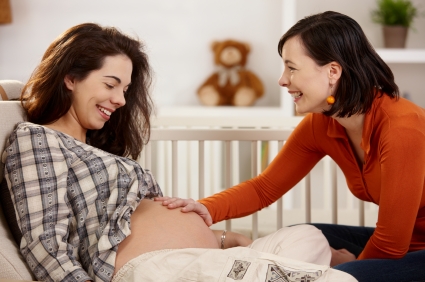 But a recent study, led by University of Michigan researcher Cleopatra Abdou, finds that these health disparities disappear if poor or minority expectant mothers feel closely connected to friends and family.

The researchers found that women with high levels of “communalism”—meaning feelings of commitment, concern, and interdependence toward friends and family—were healthier than those lacking it.

In the study, African-American women and women from lower socioeconomic backgrounds had higher levels of negative emotion, stress, and blood pressure—but not if women from those groups had strong feelings of closeness to friends and family. Instead, if African-American and poor women had high communalism, they showed lower blood pressure and suffered from less emotional distress than did women from similar backgrounds who had low communalism; in fact, these women high in communalism had levels of negative emotion and stress that were similar to European-American women and women from higher socioeconomic backgrounds. It seems that their sense of connection helped erase the emotional and physical health differences that usually exist.

The results, published in the journal Cultural Diversity and Ethnic Minority Psychology, suggest that with the many programs aimed at improving the health of pregnant women, helping them build a sense of community could be especially beneficial, particularly for women who are at risk of being marginalized from society.