How empathic are you? 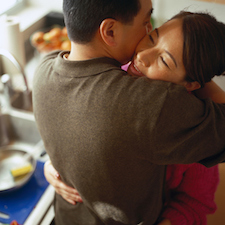 That’s the question we tried to answer with our empathy quiz, which helps readers like you to explore how you understand what others are feeling. A whopping 182,000 people from all over the world have taken this quiz since we launched it. By analyzing these responses, we’ve identified some factors that influence how empathic people tend to be.

But first, what is empathy? While the dictionary definition is ready available, the GGSC’s definition of empathy is based on science. Each scientific discipline has its own approach to studying empathy.

Neuroscientists, for example, might examine which neural circuits get activated and how people respond to empathy-eliciting stimuli. Psychologists might elicit empathy by presenting images, videos, or sounds of other people’s emotions, inviting people to read emotionally intense vignettes, or placing study participants in real-life social situations. Then researchers can ask: Do participants mirror other’s expressions? Do they withdraw, approach and help, or remain unmoved? Are there limits to empathy? Can empathy be strengthened, or expanded?

This kind of work has generated two flavors of empathy.

The first is called “affective empathy,” which refers to the inner feelings that arise—and the subtle copying of expressions that happens—when we see others express emotion. The second is “cognitive empathy,” which is how we understand what other people’s emotions mean and why they typically occur.

While these two kinds of empathy are supported by distinct pathways in the brain and emerge at different times, they can and do interact to influence one another. Affective and cognitive empathy also influence, and are influenced by, other biological systems and processes that contribute to everyday feelings, thoughts, beliefs, decisions, and behavior.

The GGSC empathy quiz was adapted from validated questionnaires, designed to capture both affective and cognitive empathy. It asks people to rate their agreement with statements like, “I get a strong urge to help when I see someone who is upset” (affective empathy), and “Before criticizing somebody, I try to imagine how I would feel if I were in his/her place” (cognitive empathy). By analyzing the answers in relation to demographic information, we were able to build up a profile of what factors seem to influence empathic skills.

It’s important to note that we are not making any causal claims about why some people appear to be more empathic than others—we’re not identifying the factors that necessarily cause people to be more or less empathic. We are also not attempting to explain the origins of any of the differences. These results are influenced by a mix of lived experience, attitudes, abilities, and even a dash of cross-cultural “lost-in-translation.” All we are doing here is noting who appears to be strong in empathy.

Across affective and cognitive empathy questions, quiz-takers scored an average of 3.7 out of a possible 5 on each question, higher than the midpoint (2.5). Affective empathy scores were slightly higher than cognitive (3.8 vs. 3.6), suggesting that the tendency to tune into and embody others’ emotions is slightly stronger than the willingness to try to understand where others are coming from.

Given what we see on many of our quizzes, we were not surprised to see higher empathy scores for female quiz-takers. In general, women tend take our quizzes more often and select values closer to the ends of scales (e.g. 1s and 5s rather than 3s). This could reflect gender-based social norms, a sex-based difference in willingness to endorse statements about personal experiences, or some other factor, but our data can neither confirm nor dismiss these interpretations. Interestingly, while men’s affective and cognitive empathy scores were nearly the same, the women’s affective empathy was notably greater. Again, since people are answering questions about themselves, we can only speculate upon the reasons why. 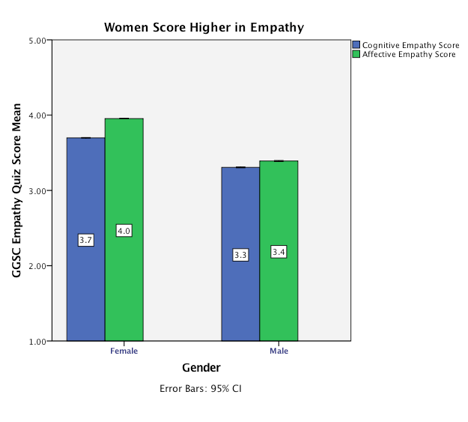 GGSC Empathy Quiz scores increased with age. This is consistent with some studies which claim that younger generations are less empathic. However, it’s also possible that individuals simply grow more empathic as they age. In fact, there is a large literature studying generativity, a drive to contribute to the welfare of future generations that famed developmental psychologist Erik Erikson attributed to middle and later adulthood. These findings suggest that people do tend to become more empathic. For much older adults in our sample (over 70), however, our data show empathy tapering back off, back down to levels reported by people in their 30s and 40s. Falling social engagement and difficulties with physical and mental health may hurt empathy, which might remind us of the importance of taking care of our elders and keeping them connected with each other and the rest of society.

Middle siblings have more empathy than only children

Empathy scores for middle children were greater than those for siblings on the older and younger ends, who were roughly the same. Empathy scores for only-children, who have fewer opportunities to practice negotiating with siblings, were the lowest. This rang true for me, as one of five kids: My younger brother Mike (the exact middle child), a mellow guy who talks a tough game, was the only one who anxiety-barfed when our next younger brother got bit by the dog. 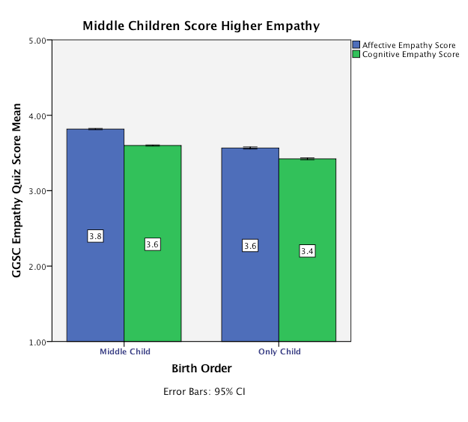 Liberals appear to be more empathic than conservatives

Consistent with Robb Willer and Matt Hertenstein’s research about differences in the prioritization of guiding moral values between liberal and conservative thinkers, empathy scores were greater for more-liberal than more-conservative quiz-takers. According to their research, liberals tend to prize concern, fairness, and nurturance—all of which involve empathy—while conservatives assign greater priority to loyalty, tradition, and moral purity. Our data do not, however, reflect a political-orientation-based fundamental difference in the capacity for empathy. We simply note an association between empathy and self-described liberals who took our quiz. 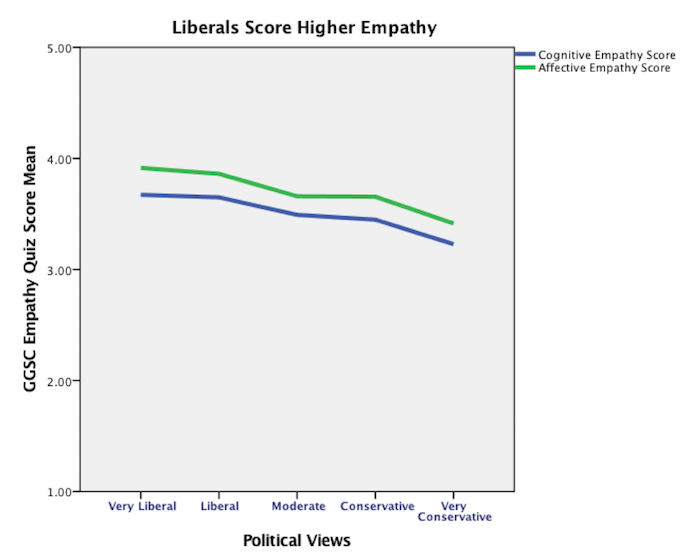 Studies by GGSC faculty director Dacher Keltner (and others) suggest that empathy generally declines as income rises. While our quiz did ask people to indicate their annual household income, there are several factors that prevent meaningful analysis or interpretation of the data. Firstly, quiz-takers came from all over the world (many from our Science of Happiness course, which has enrolled over 450,000 students, less than half of whom are from the US), but the question assumed a US-dollar response. We cannot know whether quiz-takers converted currency, or what the different income level choices offered mean for lifestyle, or socioeconomic status, in different parts of the world.

Our level of empathy does appear to be shaped by factors like gender, age, and the roles we played in our family of origin. But empathy is also a skill, one that we can develop through effort. To develop your own empathy, you might try the exercises on Greater Good in Action, our online library of research-tested skills for a more meaningful life.