You’re in a waiting room, seated next to two other people. There are only three chairs. A woman enters on crutches, a medical boot on one leg. She winces, checks her phone, sighs uncomfortably, and leans against the wall. Neither of the other people responds.

Do you get up and offer her your seat? 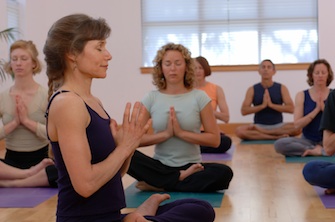 You’ll be much more likely to if you meditate, according to a new study published in Psychological Science.

In the study, Paul Condon and Dave DeSteno of Northeastern University and Gaelle Desbordes of Massachusetts General Hospital assigned people with little or no meditation experience to one of two eight-week meditation classes, or put them on a wait list for a class. One class was a mindfulness meditation class geared toward focusing and calming the mind. The other covered similar terrain but also discussed compassion and suffering.

Both meditation classes were taught in a completely secular format. Their weekly one-hour meetings were divided evenly between guided meditation practice and discussion. Students were also given audio of 20-minute guided meditations for daily “home practice.” (Here’s a taste of the kinds of mindfulness exercises used in these classes.)

After eight weeks, the researchers observed how people responded to that waiting room situation. (By the way, the two other people seated and the be-crutched woman were confederates, planted there for the purposes of the study.)

A great deal of research to date has documented the personal benefits of meditation: stress relief, better physical health, enhanced memory and attention skills, even stronger brains. But this study offers some of the most compelling evidence to date of the interpersonal benefits of mindfulness—in this case, its ability to heighten compassionate responses to other people.

Speakers at the conference also considered why meditation, specifically mindfulness meditation, might nurture compassion. This study doesn’t answer that question, but the authors note two possible explanations in their paper: that meditation gives people a heightened awareness of their surroundings and enhances our ability to take the perspective of other people. Both possibilities resonate with what conference presenter Shauna Shapiro has written here on Greater Good, but more research is needed to back them up.

I’ll add another possibility, though: that one of the keys to feeling compassion in response to another person’s suffering, rather than wallowing in personal distress or hardening with apathy, is the ability to relate to our emotions in a healthy way—and this is a skill meditation might help us build. Meditation teaches us not to get hijacked by worry, or to try to impose tyrannical control over our thoughts and feelings. Meditation enables us to coast through these impulses when confronted with another person’s pain, which frees up biological resources so that caregiving instincts can surface to guide behavior. This may be a reason that meditation makes people more compassionate.

Another impressive aspect of this study, which was funded by the Mind & Life Institute, is that the people from the meditation classes were so willing to help despite seeing other people in the waiting room ignore the pained woman in need. Prior research has shown that when some bystanders to a problem fail to respond, that strongly influences the people around them to remain passive as well. The compassionate effects of meditation seem so strong, then, that they are able to overcome this “bystander effect.”

Condon, the study’s lead author, says he believes this finding “merely scratches the surface” of the effects meditation might have on our behavior toward others.

“The most provocative implication is that meditation may help us become more compassionate in any context where compassion is discouraged,” he says, “such as the workplace, toward a member of a rival group, or toward anyone who is disliked.”