People often assume that a person’s face will betray their true emotions—even when that person is trying to hide them. As we go about our days, we watch other people’s facial expressions and mannerisms, looking for signs of stress, sadness, and happiness in our coworkers and our loved ones.

But if we want to understand the mind of another person, is that the best way? 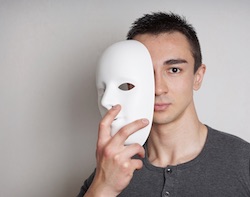 Not always, according to a recent study. It turns out people tend to overestimate their ability to read other people’s emotions from their facial expressions—which means that we may be missing out on opportunities for understanding and connection.

The study, published in the journal Psychological Science, compared observing facial expressions with a second perspective-taking strategy: putting ourselves in a similar situation, or “taking a walk in someone else’s shoes.” It’s the first study to examine how effective people think these different methods are with how effective they actually are.

The researchers conducted a series of experiments where one group of participants (called experiencers) were videotaped while viewing 50 pictures that varied in their emotional content. After each photo, participants rated how negative or positive it made them feel.

A second group of participants (called predictors) were then asked to predict how positive or negative individuals from the first group felt while looking at the pictures. They based these predictions on one of three methods: viewing the emotional photos themselves, viewing the facial expressions of the experiencers, or viewing a split screen with both sets of information.

Figure 1 from the study

In another experiment, predictors were allowed to choose which method to use—but they had trouble figuring out which one would be more effective. Instead, they chose both methods at roughly equal rates.

When predictors were allowed to change their strategy from one session to the next, they did gain insight—they chose to read facial expressions less and less over the course of the experiment. However, they continued to choose this strategy some of the time, when it would have been more effective to rely entirely on viewing the photos themselves.

Researchers also tested how well participants could discern their own emotional state, as recorded during an experimental session held eight weeks prior. They found that, yet again, repeating the experience was more effective than watching facial expressions. People expected that they would be more accurate at predicting their own emotions than predicting a stranger’s based on facial expressions, but even that wasn’t true.

Together, these experiments suggest that people’s intuitions about how to best understand another person’s perspective are often mistaken—they overestimate how well outer behavior reflects inner states, and they underestimate the insights that can be gained from putting themselves in another person’s shoes.

This study adds to a line of existing research about the limitations of detecting other people’s emotions based on facial expressions alone. In one study, participants were unable to correctly identify a facial expression as real or faked 40 percent of the time. People aren’t all that great at detecting facial expressions even when a person isn’t trying to hide their emotions, either. And another study found that people think their own internal states are more outwardly visible to others than they actually are.

Equally importantly, this study highlights how people overestimate differences between themselves and others: Participants didn’t expect that experiencing the same situation as another person would give them a good sense of how that person felt, when, in fact, it did. And this is likely the reason why the study participants discounted the value of simulating another person’s experience.