Some weeks ago, I sat down in my local coffee shop to begin reading Paul Bloom’s Against Empathy: The Case for Rational Compassion. A man sitting at a nearby table pointed to my book with a look of incredulity and said, “What’s that about? Sounds awful.”

I’m sure others may have the same reaction based on the title alone. But Bloom’s book is a bit more nuanced than his title suggests. Looking through years of research on empathy, he has come to the conclusion that it’s not all it’s cracked up to be. “From a moral standpoint, we’re better off without it,” he writes. 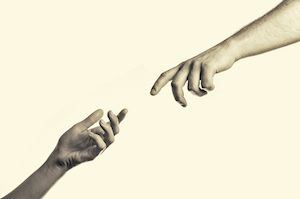 It’s an interesting premise. The idea that empathy is a problem rather than a solution to social ills flies in the face of public opinion as well as the work of many researchers. But Bloom insists that “the problems we face as a society and as individuals are rarely due to a lack of empathy. Actually, they are often due to too much of it.”

His book makes for an engaging, and somewhat enlightening, tour of the research in this area. But the book falls short in its case against empathy.

Empathy is biased—we care more about certain people who are close to us, both proximally and emotionally, says Bloom—and it leads us to seek short-sighted rather than long-term solutions to problems.

Compare the public’s reaction to the Sandy Hook massacre, where many empathized with the parents of the dead children, to the public’s reaction to everyday murders in Chicago and other urban settings, which often pass with barely a nod. This disconnect between our emotional responses to unusual events versus everyday violence may lead us to make wrong-headed suggestions for how to cope with gun violence, says Bloom.

He outlines several research studies that show empathy can lead to bad outcomes. For example, in a study by Daniel Batson and colleagues, participants who were induced to feel concern for a terminally ill child were more likely to put her above other children on a waiting list for receiving care than participants who were told to take an objective perspective toward the child.

“Empathy’s effects…weren’t in the direction of increasing justice. Rather, they increased special concern for the target of empathy, despite the cost to others,” writes Bloom.

Empathy is also immune to numbers, he argues, so that we may feel more empathy for one suffering person than we will for many. Empathy has too narrow a focus, says Bloom, and doesn’t help us when we need long-term solutions to social problems that may hurt some people but are better for the greater whole.

Instead of empathy, Bloom believes that “self-control and intelligence and a more diffuse compassion” are the answer. He points to people who fight for climate change, not because of an empathic connection with anyone in particular, but because of their concern for the lives of humans in general and the world at large. This is an astute observation about the importance of compassion, and one I agree gives us more reason to promote compassion. But I’m not sure it’s a solid case against empathy.

What is empathy, anyway? 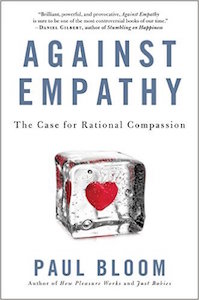 To illustrate why empathy isn’t needed, Bloom argues that most people would come to the aid of a child reacting with fear to a barking dog whether or not they empathized with the child. But this seems a poor example: Understanding the child’s emotional state is exactly how you know she is afraid rather than simply playing with the dog.

This gets to the crux of the book’s problem: Bloom’s definition of empathy—“the act of coming to experience the world as you think someone else does.” This definition doesn’t jive with the common view of empathy, which is not just about resonating with others emotionally but more about understanding their emotions and viewpoints. And it doesn’t really jive with that of researchers, either, who tend to parse out different aspects of empathy, especially in relation to moral decision-making.

I think Bloom makes a firm case that emotional resonance—or feeling what someone else is feeling—is not always good. Research suggests that feeling distress when others are suffering can impede performance, reduce the desire to help, and lead to burnout, which is antithetical to altruism. Conflating empathy with emotional distress, though, when researchers consider them distinct processes that have different impacts on altruism, is very confusing.

This is why researchers often tease out different aspects of empathy, showing how empathy can be affective and cognitive, trainable and spontaneous, and conducive and not conducive to moral action. Whether or not your emotional resonance, in particular, is a good thing depends on your self-awareness, how well you manage your emotions, and your stress levels. Many of the people Bloom cites as supporters of his views—like Jean Decety, Joshua Greene, and Jamil Zaki—would never suggest foregoing empathy, not even empathy in the sense of emotional resonance.

Can we turn off empathy?

For a moment, let’s grant Bloom’s argument that affective empathy is a bad thing. It still seems foolish to argue against a response to suffering that is clearly ingrained within us. By suggesting that we can run a campaign against empathy as though it were strictly under our cognitive control, he loses credibility—especially since many of his examples just prove the opposite.

Bloom comes closer to the heart of the issue when we writes, “I believe our emotional nature has been oversold.” Perhaps so. It’s misguided to make a decision based on what we “feel” is the right thing to do when it clearly hurts those around us. We certainly need to consider the biases that empathy may be subject to and take pains to counteract them so that we can make wiser decisions.

But we can’t simply turn empathy off. And if we could, we’d lose the positive aspects that even Bloom seems to recognize. “I don’t doubt that it [empathy] can be strategically used to motivate people to do good things,” he writes—not to mention that positive emotional resonance helps us to experience another’s joy and even to feel closer in relationships.

The key isn’t to get rid of empathy. But we do need to learn to pay more attention to it and to understand how it drives our behavior, some of which Bloom describes in his book. In that way, we can take the necessary steps to counteract negative influences—perhaps through expanding our circle of care, learning emotional self-control, learning how to read others’ emotions, examining bias in ourselves, and maybe even practicing rational compassion, as Joshua Greene and others have argued.

Against Empathy would definitely be more compelling if it weren’t framed as a polemic. Some of Bloom’s points are thoughtful and convincing, and I agree with his arguments concerning moral decision-making when he suggests we need greater compassion for others, more kindness, and increased self-regulation—all of which can be taught and that research suggests can help improve well-being and social interactions.

But I think Bloom is fighting the wrong demon here. Empathy isn’t the problem; lack of self-awareness and emotional regulation are the problem. Interestingly, Bloom seems to demonstrate self-awareness when he admits, “I’m only human, so it’s probably true that this book contains weak arguments, cherry-picked data, sneaky rhetorical moves, and unfair representations of those I disagree with.”

Sadly, I have to agree with him there.