In the 1970s, anthropologist Robert Trivers proposed the theory of reciprocal altruism, which argues that organisms provide a benefit to others only in expectation of future reward.

But Trivers’ influential theory has some holes. It doesn’t necessarily explain why someone would sacrifice her life for another, nor does it cover anonymous acts of charity. These behaviors offer a more benevolent picture of human nature, challenging the inherent selfishness presumed by Trivers’ tit-for-tat theory of altruism. So which is the more accurate depiction of altruism—and, by extension, of human nature? 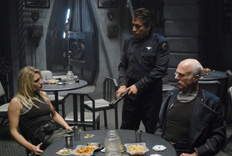 It’s a thorny, inconclusive question that has been explored in science, religion, art, and some unlikely corners of popular culture. Even dark, violent, and special-effects-laden television series can show what is best in humanity—and in the process, illustrate the moral complexities of behaviors like altruism. The Sci Fi channel’s Battlestar Galactica might be the best and most perceptive of the lot.

In Battlestar Galactica, 12 space-faring colonies of human beings—far from Earth and unknown to us, but sharing a common biological ancestry—are destroyed by a species of intelligent, emotive machines called the Cylon. Billions are killed, but 50,000 humans escape in a small fleet of space ships pursued by the Cylon.

Some readers might recall the original Battlestar Galactica as a cheeseball 1970s space opera, but the new series is as morally complicated and emotionally fraught as the old one was frivolous and dumb. Like all decent science fiction, the new Battlestar Galactica serves as a philosophical thought experiment and considers the profound implications of a speculative premise: How would people really respond if humanity were pushed to the very edge of extinction?

Part of the answer is that individual people would be driven to extremes of altruistic self-sacrifice—which inflicts a terrible psychological cost on the characters in Battlestar Galactica—and that individuals who refuse to behave altruistically would be branded moral outlaws. As they sacrifice more and more for the sake of their species, the social bonds of the Colonists—as the humans are called—tighten and reinforce altruistic behavior.

Scientists have come up with a name for this kind of behavior: “selective investment theory,” first proposed by psychologists Stephanie and Michael Brown last year in the journal Psychological Inquiry. Whereas reciprocal altruism emphasizes what individuals ultimately get from others, selective investment theory argues that social bonds evolved to override self-interest and motivate high-cost altruism among individuals who depend on one another for the survival and reproduction of their species.

While the Colonists sometimes illustrate the Browns’ theory, the Cylon personify it completely. The Cylon were created by the Colonists to be perfect altruists, always putting the welfare of others ahead of their own. Because they do not love each other or themselves as individuals, they conceive of their conflict with humanity as total and collective. Any number of deaths—Cylon or other—are acceptable if it serves the purpose of Cylon survival.

But when individual members of the fanatically religious, monotheistic Cylon develop deep attachments to individual Colonists, it undermines their sense of group purpose and solidarity. “Genocide was a sin in the eyes of God!” proclaims one Cylon after she falls in love with a human being—which gets her branded a heretic.

Selfishness remains foreign to the Cylon, but not to the Colonists. When the character Gaius Baltar strikes up an alliance with the hated Cylon, he is motivated primarily by his own private needs and desires. “The trick to being human,” he tells a Cylon, “is to always think about yourself first”—a seductively cynical definition of humanity that the series explicitly rejected at the close of its third and most recent season this past March, when Baltar was put on trial for his life. At issue: When Baltar joined forces with the Cylon, was he acting selfishly or for the greater good of humanity?

In the end, the judges decide that his selfishly motivated actions helped humanity to survive, though Baltar remains a moral and social outsider. Meanwhile, the Colonists and the Cylon inch toward a synthesis, with one side taking on the characteristics of the other—to the point human and Cylon defectors marry and give birth to human-machine hybrids.

Over time, then, the lines begin to blur between the selfish and the altruistic characters, as we learn that selfish motives can still serve collective goals, and complete selflessness can cause horrific acts of genocide. This might make the series sound relentlessly grim, and it is. Though it embraces a view of humanity as fundamentally altruistic, Battlestar Galactica depicts altruism as a complex, double-edged fact of life, neither good nor bad, but essential to survival. It is also a quality that ties enemies together, and opens the possibility, however remote, for reconciliation.