The year is 1977. I am seven years old and I am in a movie theater. My life is about to change forever. 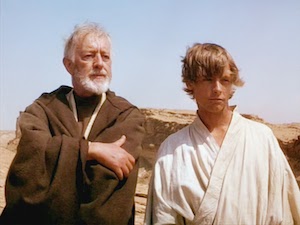 “A long time ago in a galaxy far, far away…” it starts. Every image that follows is a shock; each one seems to spring from some deep memory, yet I have never seen anything like the beat-up puzzle-piece spaceships, the sinister marshmallow of the Stormtroopers’ armor, the deepbreathing shadow of Darth Vader.

There is something else that burns itself into my mind, something beyond, behind, above the images. “The Force is what gives a Jedi his power,” says the Jedi Knight Obi-Wan Kenobi to the idealistic farm boy Luke Skywalker. “It’s an energy field created by all living things. It surrounds us and penetrates us. It binds the galaxy together.”

The Force? This goes beyond the really cool flashing light sabers and pulsing blaster cannons. This is…philosophy—a bulky, foreign, fascinating word to my seven-year-old self. But even at that age I understand that the philosophy of Star Wars is not merely tacked on; it is built right into the narrative.

When Luke is training with his master, Obi-Wan instructs him to “stretch out with your feelings,” implying that our emotions and intuitions contain important information that can help guide us. When he is trying unsuccessfully to fire a laser torpedo to destroy the Death Star, Obi-Wan’s disembodied voice intones, “Let go, Luke.” Pay attention to what is happening inside, the film suggests. There you might find something larger than yourself.

These are messages I’m not getting from anyone else in 1977. Thirty-five years later, in the futuristic-sounding year of 2012, I’m sitting with my seven-year-old son, Liko, in a movie theater. We are about to watch the re-released 3D version of Star Wars: Episode I: The Phantom Menace. It’s the first in a series of (mostly terrible) prequels that are set a generation before the one I saw in 1977.

Within 10 minutes, we meet boyish Padawan Learner Obi-Wan. “I have a bad feeling about this,” he says, a phrase uttered by every main character in the series.

“Don’t center on your anxiety, Obi-Wan,” replies stern Jedi Master Qui-Gon. “Keep your concentration here and now where it belongs.”

Obi-Wan, brash young buck, isn’t buying it. “Master Yoda says I should be mindful of the future…”

“…but not at the expense of the moment,” cuts in Qui-Gon.

Then out come the light sabers, the shooting starts, and Jar Jar Binks is soon saying, “Mesa yous humble servaunt!” But I’m not paying attention to any of that. My 41-year-old brain is stuck on that word: mindful.

Looking back now, after spending years of my adult life reporting on the science of mindfulness, I can see that the practice of moment-to-moment, nonjudgmental awareness of thoughts, feelings, and surroundings darts in and out of the Star Wars movies like a pod-racer through Beggar’s Canyon.

Mindfulness is in The Empire Strikes Back, when Yoda chastises Luke: “This one a long time have I watched. All his life has he looked away to the future, to the horizon. Never his mind on where he was.” It’s in Return of the Jedi, when Luke bests the Emperor by becoming aware of his own hate and anger, then decides to embrace kindness instead.

It’s in Revenge of the Sith, when Luke’s father, Anakin, allows his emotional states to interfere with his perception of reality—and thus he becomes Darth Vader. And all this appears in some of the most popular, influential movies of our lifetime.

But their lessons in mindfulness seem largely lost on my son. After watching The Phantom Menace, he races right into the mall toy store. There he pulls weapon after weapon down from the shelves—a light saber, a blaster—and begs me to buy him one.

Hey, I did that, too. At seven, I begged my parents to buy me Star Wars toys and I slaughtered legions of Stormtroopers in our backyard. It’s only in retrospect, it seems, that the mindfulness of Star Wars has influenced me. At the time, I just wanted to blow stuff up.

Which raises a question: Are the messages of mindfulness lost in the explosions and running and shooting and commercialization of Star Wars? This is an especially interesting question with the release of Star Wars: The Force Awakens this coming Friday. The director, J.J. Abrams, notoriously purged the Star Trek franchise of its utopian philosophy.

Certainly, Star Wars was always more violent than Star Trek, and, curse them, the critics are right: the movies do indeed portray slaughter on a vast scale, with little attention to the emotional and spiritual consequences. Through video games and toys, boys like my son are invited to cast themselves as Luke and Han and Anakin—and kill as many bad guys as possible. No part of mass culture is asking them to stop and breathe and pay attention. And frankly, as a parent, I don’t ask my own child to do that nearly as often as I should.

Indeed, finding holes and contradictions in the philosophy of Star Wars is like shooting womp rats in a barrel.

But, I’d like to argue, that’s not the whole story. While explosions sell tickets, underneath and around them the films have consistently preached that mindfulness fosters compassion, mercy, and restraint. The mindful Jedi Knight uses violence only in defense of others, while striving to alleviate suffering. It’s when Anakin Skywalker kills the helpless Count Dooku out of revenge that he starts down the path to the dark side.

“Fear is the path to the dark side,” says Jedi Master Yoda in The Phantom Menace. “Fear leads to anger. Anger leads to hate. Hate leads to suffering.”

The first generation exposed to Star Wars as children is now middle-aged. As I discovered when I polled my contemporaries in real life and on Facebook, many of us have gradually taken Yoda’s words to heart, moving from fascination with the machinery and explosions of Star Wars to its philosophical underpinnings.

“Yoda’s fear-leads-to-anger sequence had the most influence on me,” says my buddy Dave Pai, who saw the first movie at age nine. “It helped me learn that it’s okay to adjust my expectations and let things be.” This is a sentiment echoed by several friends in a Facebook discussion. “Racism and desensitization to violence aside, Star Wars at least introduces the idea of mindfulness to the typical preteen male,” says Dave.

That’s not Yoda’s only philosophical hit. Here’s another: “Do. Or do not. There is no try.” This is advice Yoda delivers to Luke Skywalker as the apprentice attempts to use the Force to lift his X-Wing fighter out of the Dagobah swamp. My friend Auey Santos saw the movie at age seven, and she actually recalls the “there is no try” speech when she’s trying to lift her own personal X-Wings out of the swamps of her life. Yoda’s words ask us to focus on the moment we’re in and not worry about the unknowable next one.

When Chris Crass, a political organizer and author of the book Towards Collective Liberation, went through a painful dental procedure in the fourth grade, he tried to see himself as Luke Skywalker. “Whenever I started feeling pain, I heard Obi Wan saying ‘Let go Luke, use the Force,’ and I relaxed my mind and refocused away from the pain,” he says.

It’s a technique he used throughout his childhood. “It was almost always the voice of Obi Wan or Yoda instructing me to let go, to uncloud my mind, to trust my deeper intuition and believe in my inner power. I did this playing sports, taking tests, being in risk taking situations like public speaking and so on.”

Dave, Auey, and Chris are now all parents, and it seems that many of my generation are using Star Wars to teach the next one about mindfulness. When Chris took his Star Wars-loving nephews (ages six and eight) with his 18-month-old son River to Disneyland, he worried that the older kids would lose track of their cousin. And so whenever he’d see them forgetting about River, he’d just remind them that, “Jedi must be mindful of their Padawan.” This always re-focused their attention, he says.

For my part, I often remind Liko of the Jedi when I need him to pay attention, manage negative feelings, or just clean his room without stopping every five seconds to play with his toys. Sometimes I adopt a silly Yoda voice—“Do or do not!”—that makes him slap his hand across my mouth.

“Daddy!” he says. “Stop trying to sound like Yoda!” To which I reply, “I will. When act like Luke Skywalker, you do!”

Resist this lesson now, he might. But the Force is strong within him. The deeper lessons of life that are dotted throughout the Star Wars epic will gradually sink in. As Darth might have said, “Like father, like son.”

A different version of this article first appeared in the December 2013 issue of Mindful magazine.