The United States has never had a woman president. Even though many Americans believe women are just as deserving as men when it comes to leadership, gender bias remains, making it hard for women to attain the highest office. 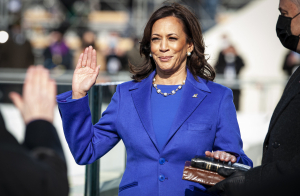 Though stereotypes about women can certainly hurt their chances of being elected president, another type of bias may also be at play: “pragmatic bias.” Holding pragmatic bias against women in an election means that people who may prefer a woman candidate still won’t vote for her out of fear that it will be too difficult or impossible for her to win—often because they believe others won’t support her.

Could this be part of what’s holding women candidates back from the highest office? And, if so, what can we do about it? A new study aimed to find out.

The study was conducted during the United States’ 2020 primary election for president, when there were several Democratic women with broad appeal running, including Kamala Harris, Elizabeth Warren, and Amy Klobuchar. Democratic voters had to decide not only who they wanted as president, but who might be able to beat Donald Trump in an election—an opportunity to look at how pragmatic bias might influence votes.

To find out, researchers polled Democratic primary voters to learn their views on the electability of women candidates (in general), the electability of particular women candidates, and their intentions to vote for a woman, while taking into account things like the voters’ gender, age, race, and education level, as well as whether or not their preferred candidate was a woman or a man.

When asked why they thought women were less electable, respondents confirmed that pragmatic concerns were prevalent. Ninety-one percent said they thought “many Americans are not yet ready to vote for a woman president,” while many also believed women candidates would have to meet higher requirements for proving themselves, face biased media coverage, and endure harsher, more effective criticism from their opponents.

This does not surprise one of the study’s coauthors, Robb Willer of Stanford University.

“We had the sense that this was a widely held belief amongst many Americans and, in particular, amongst more liberal Americans who are more aware of and concerned about gender inequalities in society,” he says. “Many Democratic primary voters have deep-seated suspicions that others hold significant biases against women as potential leaders.”

Willer and his team also found that people who believed a woman was less electable had less intention to vote for a woman in the primary, too—even if a woman was their preferred candidate.

How to combat pragmatic bias in politics

How might researchers change that bias? The next part of Willer’s experiment focused on finding out.

In another experiment, different Democratic voters were given information about women’s actual electability based on real-world election results. For example, people were informed that women who run for office are as likely to win general elections as men, receive more support than men, and are as successful as men in becoming primary delegates. In some cases, the researchers added the fact that though women won elections as much as men, they still faced disadvantages in elections due to gender bias. In both experiments, a separate group of participants received information about the 2020 presidential elections (as a control).

Afterward, the researchers asked people about their general views about voting for women candidates, or about their intention to vote for specific women (like Warren or Klobuchar).

Unfortunately, giving people accurate information about others’ readiness for a woman president was not enough to change their intentions to vote for a woman. But presenting people with facts about women candidates’ past performance did increase voters’ intentions to vote for a woman, in general, and for specific candidates. Adding the fact that they faced disadvantages didn’t affect the results one way or the other.

“If you’re going to be a part of a successful collective action, like a successful primary campaign for an Amy Klobuchar or an Elizabeth Warren, you need to know that people aren’t just open to this, but that they’re going to join you and vote for a woman candidate—that the effort will be successful,” say Willer. “Otherwise you might think your vote will be better spent on a second- or third-favorite candidate who can marshal real votes.”

This suggests that this kind of voter education helps dilute the pragmatic bias effect, perhaps by challenging people’s preconceived ideas.

“These data [about women’s electability] are surprising to most people, especially many Democrats,” Willer says. “I don’t think people realize just how successful women candidates are in American elections; so the data stick out, and they’re relatively convincing.”

While the increased willingness to vote for a woman was rather small—a 3% bump—it’s still significant, especially given the narrow margins of victory in a general presidential election. Also, when participants presented with the facts were contacted again about a month later, they still reported higher intentions to vote for a woman, suggesting that the effect was somewhat robust.

“I hope an intervention like ours showing electability concerns are exaggerated might be helpful in counteracting the influence of electability concerns in American politics,” he says. “And not just for women, but for other groups, too—like racial and ethnic minorities, who, according to other research, are also more electable than people think.”

The way forward for women candidates

There are still obstacles on the road to more women’s representation in politics. Willer says that just because women are doing well in elections doesn’t mean they don’t face bias. In fact, he says, some evidence suggests women have to be much more qualified than their male counterparts to get elected.

And, of course, media, political pundits, and opponent campaigns may try to exploit people’s biases and convince them not to vote for a woman. That onslaught can be hard for an average voter to ignore—though perhaps people armed with the facts may be less susceptible, he says.

Of course, Willer was not able to find out how people actually voted; so it’s possible people were not convinced to change their vote even if their intentions shifted. People might look at the results of the 2020 election, where a man won the Democratic primary and beat Donald Trump, and the 2016 election, where Hillary Clinton lost to Donald Trump in the general election, and lose hope.

But, says Willer, people need to remember that Hillary Clinton won the popular vote. If she were running for governor, he argues, she would have won.

“One of the sad things about the 2016 election is it may have taught people that women are less electable than they probably are, even though a different read on those data could have been that it proved women could win,” he says.

What would help, Willer says, is if male Democratic candidates became allies of women candidates and spread the word about their electability, refuting anyone who suggests otherwise. If we could all pitch in to correct misperceptions, perhaps we could give women a fighting chance at becoming president.

“It’s very difficult for candidates to proclaim themselves electable, even if they use data, because of course they’re going to say they’re electable, right? So, it becomes the moral responsibility of everyone who knows that women are electable to get the word out,” he says. “We all need to play a role in neutralizing this bias.”