“I was told I was too aggressive, I was too blunt, I was too direct, and that I sounded pompous when I offered advice on recruiting, despite the fact that I had been there twice and was very successful,” Lt. Col. Kate Germano told Public Radio International in 2015, shortly after she was removed from command. “In my career of 19 years, what I found was that my counterparts would not be told those things.” 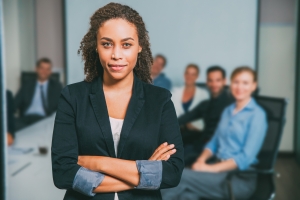 Germano isn’t the first to point to a double standard in how we judge the behavior of leaders. When men take charge, we say that they’re strong and assertive. Women, on the other hand, are all too often labeled bossy or aggressive.

This type of bias appears in performance evaluations. These evaluations are part of the process to identify, develop, and promote talented individuals and are designed to be meritocratic. Ironically, they can exacerbate the very gender inequities they are striving to reduce—like the anemic number of women in leadership positions.

Our research offers evidence of this from a large field study at an institution—a military service academy—that prides itself on equal opportunity and meritocracy. Our findings suggest that people from underrepresented groups can be penalized for not looking like a leader, and are told implicitly that they are not leaders through the messaging of performance evaluations.

What does it mean to “look like a leader”? Research on leadership finds that people generally look for agentic characteristics (e.g., instrumental, task-focused, goal-oriented) in a leader, whereas communal characteristics (e.g., nurturing, relationship-focused, collaborative) are less valued. Agentic traits are typically associated with men and masculinity, and communal traits are associated with women and femininity. Because men are often assumed to be agentic and women to be communal, women don’t look like leaders.

As a result, women in leadership positions face an impossible situation. They will either receive feedback highlighting their lack of feminine, communal attributes (“She’s not compassionate or organized enough”), criticizing them for taking too much power (“She’s abrasive, overbearing”), or pointing out their lack of some key leadership qualification (“She’s inept, temperamental”). No matter their leadership style, they are deemed unfit.

We saw these trends firsthand in our research on peer evaluations from a military-service academy. We examined subjective peer-performance evaluations of over 4,000 leaders and 81,000 assignments of leadership attributes (chosen from a predetermined list of 89 attributes: 44 positive and 45 negative). Based on prior research, we expected that men would be assigned more positive attributes and women would receive more negative ones.

As predicted, women received more negative leadership attributes (in greater overall quantity and variety) than men. Specifically, women were more likely to be described as inept, frivolous, gossipy, excitable, scattered, temperamental, panicky, and indecisive—in other words, a host of negative feminine stereotypes. The message inherent in these descriptors is clear: The women evaluated were incompetent and not qualified to be leaders.

Interestingly, women were only penalized for acting in an agentic—i.e., more masculine—way with one negative attribute: selfish. For women leaders in historically male-dominated professions, such as the military, we expected more penalties for women who dared to usurp power as leaders. (While we do not have the data to explain this result, we speculate either that these future officers have not yet developed a traditionally masculine leadership style or that they have received sufficient negative feedback and backlash about their agentic [i.e., masculine] leadership style that they responded by adopting a more traditionally feminine leadership style.)

We also found that men and women received similar numbers of positive attributes, although the attributes they received were qualitatively different. While men were more likely to be assigned attributes such as analytical, competent, and logical, women received compassionate, enthusiastic, and organized. Arguably, all of these leadership attributes are aspirational and valuable (and when asked, people indicate that the most important traits in a leader are communal traits, such as compassion).

“Women in leadership positions face an impossible situation. No matter their leadership style, they are deemed unfit.”

But let’s not overlook the elephant in the performance-review room: If these traits are so valued, why aren’t women retained and advanced equivalently to or at higher rates than men? Men, after all, are less likely to receive these attributes. Why is this not reflected in the senior military leadership (general and flag officers) as well as the C-suite?

The problem, it turns out, likely starts earlier in the leadership pipeline. At the officer ranks, women in combat jobs are retained at approximately half the rate as men. When it comes to promoting a new senior officer, there are simply more male officers to choose from.

Outside of the military, there’s renewed momentum to increase diversity and inclusion, improve retention rates, and achieve more equitable recruiting, hiring, and promotion. It’s crucial that the individuals leading the charge not overlook the power of performance-evaluation language, which can reinforce stereotypes that undermine these objectives. As applied researchers working to improve the workplace for all organizations, we’ve distilled a few evidence-based suggestions to minimize bias in performance evaluations.

Include unconscious-bias education as part of manager (leader) development training. Raising awareness of how we can inadvertently bias language in performance evaluations may not eliminate biased language, but it will certainly encourage evaluators to stop and think before providing feedback. Simple online programs are available to assess gender “coding” in job advertisements and other employment documents. Formal evaluation programs that use standardized lists of words or phrases should also be evaluated for biased language.

Be specific and clear about evaluation criteria. When evaluators don’t have specific criteria and evidence to measure the performance of an employee, they’re more likely to rely on information from bias and stereotype, like personality traits. Performance data might include productivity metrics, and evaluation criteria could include the number of sales calls in a specific period of time. We think there’s a great example of how to set this up here.

Across industries, senior management is desperately trying to retain talented women. Too often, these women receive formal and informal messaging that they neither belong nor fit, and they are penalized for their authentic leadership style. There are high costs associated with employee turnover, and overwhelming evidence suggests that businesses’ bottom lines increase by as much as 15 percent with more gender-diverse leadership teams in senior management, the C-suite, and the boardroom. Reducing evaluation bias is a business imperative.