The notion that men are intellectually superior to women remains lodged in our collective psyches. New research offers evidence that this bias has pernicious real-world consequences. 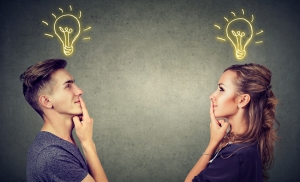 A new study finds that women are less likely to be referred to employers as promising potential hires if the position in question is said to require a particularly smart person.

“Despite the objective evidence of women’s intellectual and professional accomplishments, it seems that their ability to make intellectual contributions is still not seen as being on par with men’s,” writes a research team led by Cornell University psychologist Lin Bian.

A previous study by the same researchers found that women are less likely to apply for jobs that are advertised as requiring a brilliant mind. This new research, published in the journal American Psychologist, suggests that such a job description triggers sexist assumptions as people consider their friends and peers as possible candidates.

Bian and her colleagues Sarah-Jane Leslie and Andrei Cimpian decided to focus not on hiring decisions, but rather on recommendations. They were curious whether gender bias affects the applicant pools from which even open-minded employers have to choose.

In their first study, 347 people recruited online were asked to refer acquaintances for a job opening. Half read a description that emphasized the candidates’ intellectual abilities, using phrases such as “high IQ,” “superior reasoning skills,” and “natural intelligence.” The others read a similar statement that emphasized the need for the employee to be highly motivated.

All participants were then asked to recommend “someone they know who meets the requirements of the job.” Once they did so, they re-read the description and recommended a second person.

“The odds of referring a woman were 38.3 percent lower when the job description mentioned brilliance,” the researchers report. This same bias was found whether the person making the recommendation was male or female.

The researchers then replicated the study using a larger and more diverse set of participants (811 Americans). For this group, the level of gender bias was lower, but still significant: The odds of referring a woman decreased by 19.9 percent when the job description included references to intellectual ability.

A final study, which follows up on research published last year, provides additional evidence that the roots of this bias can be found in five- to seven-year-old children.

By many metrics, women are equal, if not superior, to men in the intellectual arena. “Girls make up over half of the children in gifted and talented programs,” the researchers note. “Women graduate from college at higher rates, as well as from master’s and doctoral programs.”

Yet the underlying prejudice persists. (It helps explain why children still think of scientists as male.) That means some of our smartest citizens are not getting the opportunities they deserve, which ultimately hurts everyone.

Bian and her colleagues point to two possible ways to fight this bias: “By changing the brilliance=men stereotype, or by making this stereotype irrelevant to decisions about employment.”

They ague that could be achieved by placing an emphasis on the “growth mindset,” which states that “most skills can be considerably improved with focused practice and appropriate mentoring.”

So if employers want to attract a wide and diverse pool of applicants, this research suggests they should leave out references to intellect when they’re writing job descriptions. If they call someone in for an interview, they’ll know soon enough if that person seems capable of doing the job—and they won’t weed out potentially awesome employees ahead of time.