America is not doing well for its children. UNICEF ranks our youth 26th out of 29 other rich countries on composite measures of well-being. Depression and anxiety are rising among youth over a 70-year period. And a recent survey of 22,000 high school students found that most of them feel tired, stressed, and bored in school the majority of the time. 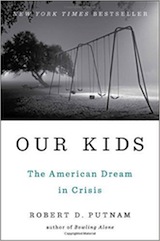 Should we simply throw up our hands and give up? Not according to Robert Putnam, the Malkin Professor of Public Policy at Harvard University. In his new book, Our Kids: The American Dream in Crisis, he paints a devastating picture of what’s happening to American youth because of inequality of opportunity, while also providing some thoughtful social and political solutions for turning this trend around.

Putnam argues that the American Dream of equal opportunity for all has vaporized and children are no longer advancing beyond their parents. Rising inequality that stymies economic mobility has created two kinds of families: the affluent, and the ones whose children are locked into poverty, diminished achievement, even impaired neurology and cognition.

Putnam brilliantly connects the dots between the inequality of opportunity—which has gotten steadily worse since the 1970s—and its destructive effects on our society and especially our children. Using census data and social science research, he presents a series of “scissor graphs” that show over and over again the resulting disparities among neighborhoods, schools, and families that are increasingly segregated along class lines. Without intervention, Putnam warns, these disparities pin a generation of youth into place on the economic ladder and doom them to a future of despair.

But here’s the kicker which Putnam drives home: Children from affluent and poor families are turning out wildly different down to the very structure of their brains. “Healthy brain development in American children turns out to be closely correlated with parental education, income, and social class,” he writes.

Poverty and the toxic stress it creates can affect cortisol levels, brain growth, brain waves, and even gray matter (cell bodies), he adds. Children in these situations have trouble concentrating, learning, and following directions in school. They have smaller vocabularies and simpler syntax. For complex reasons, they do worse on standardized tests, get lower grades, leave school earlier, and have sex earlier. They have trouble regulating their feelings and can be impulsive or withdrawn.

Poor families (whom Putnam defines in shorthand as ones where parents have no more than a high school education) are different from their college-educated counterparts. These “fragile families” are more likely to live with stress and fear as a result of everything from community violence and economic insecurity, to housing and food insecurity. They are more often led by single parents of younger ages, with more children unplanned or conceived with multiple partners, and with more children growing up without the presence of one of their biological parents. These circumstances often lead to fewer parenting skills, fewer resources and supports, more family friction and weaker attachments, poorer school performance, and more behavior problems. Though there are many successful single-parent families, Putnam finds that, on average, children from poor, single-parent families “do worse in school and in life.”

Affluent families, on the other hand, are more stable, more likely to have two working parents, and have access to more resources, both material and social. Putnam points to a Pew study that shows affluent families know more people in their community—a doctor, lawyer, scientist, politician, etc.—and their children are mentored more often by these non-family members. Networks of poor families, on the other hand, are mainly limited to extended family members who are also stressed. And because they live in increasingly economically segregated neighborhoods, it’s less likely that poor kids will come across a mentor who could offer help.

Parenting styles in the two families differ, too. Affluent families invest more in fewer children, and they use an “intensive” parenting style to promote their children’s achievement. They nurture qualities of autonomy, independence, self-direction, self-esteem, and responsibility in their children. They engage in numerous little “give-and-take” interactions, something researchers have found to be fundamental to early brain wiring. These parents are sensitive to, and engaged with, their children’s needs: they spend more on schooling; they even eat more meals sitting down together. As a result, their children do better in school, are less anxious, and are more socially competent.

Poor parents use more “preventative” strategies—obedience, discipline, and conformity—in hopes of keeping children safe in a more chaotic and violent environment. Rather than promoting positive qualities (like verbal skills), poor parents tend to let children go their own way and then use harsh punishment when they get into trouble. Parents who are under extreme economic stress cannot be as physically or emotionally present for their children to form the important parent-child attachment that serves both as rudder and anchor for growing children. All of these stresses add up to lifelong challenges in physical and mental health, perpetuating the cycle of problems and costing the nation millions of dollars.

The generalizations in Our Kids can be grating, and readers should be cautioned to neither idealize affluent parents nor diminish poor parents—there are always exceptions. Putnam is a policy analyst and not a psychologist, so he relies on the large data trends to make the policy point that the ability to parent is tightly correlated with economic policies—something developmental scientists have tried to warn about for decades but Putnam does more successfully. Our Kids could also selfishly be read as a checklist for what “good parents” should do. But it is intended to be a wake-up call for what a nation can and should do for its families.

Fortunately Putnam offers solutions that don’t blame poor parents or poor schools, but instead lay squarely with our nation’s policies. Putnam wants to see us adopt or return to policies that increase economic mobility and/or alleviate stress on poor families. For example, he recommends policies that allow parents to stay home after the birth of a child without sacrificing their job, and subsidies and tax credits for early childhood care and education. He points to high-touch parenting programs that send a parenting expert into the homes of stressed families to improve child outcomes. And, he points to one program that simply injected cash—$3,000—to poor families with infants and toddlers, which relieved enough stress on parents to improve their children’s chances dramatically.

Putnam has been called “the most influential academic in the world today,” and “the poet laureate of civil society.” Indeed, the book manages to be apolitical and should therefore appeal to conservatives and progressives alike. But one of the implicit messages is that children’s well-being is political, in that it will take political will to adopt policies that solve this growing crisis in opportunity disparity. And that makes Our Kids one of the most important books of our time—and this election cycle.