A decade after scientists discovered that lab rats will rescue a fellow rat in distress, but not a rat they consider an outsider, new UC Berkeley research pinpoints the brain regions that drive rats to prioritize their nearest and dearest in times of crisis. It also suggests humans may share the same neural bias. 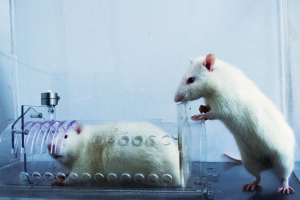 The findings, published in the journal eLife, suggest that altruism, whether in rodents or humans, is motivated by social bonding and familiarity rather than sympathy or guilt.

“We have found that the group identity of the distressed rat dramatically influences the neural response and decision to help, revealing the biological mechanism of in-group bias,” said study senior author Daniela Kaufer, a professor of neuroscience and integrative biology at UC Berkeley.

With nativism and conflicts between religious, ethnic, and racial groups on the rise globally, the results suggest that social integration, rather than segregation, may boost cooperation among humans.

Bartal launched the study in 2014 as a postdoctoral Miller fellow in Kaufer’s laboratory at UC Berkeley. Bartal, Kaufer, and UC Berkeley psychology professor Dacher Keltner led a research team that sought to identify the brain networks activated in rats in response to empathy, and whether they are mirrored in humans. The results suggest they are.

“The finding of a similar neural network involved in empathic helping in rats, as in humans, provides new evidence that caring for others is based on a shared neurobiological mechanism across mammals,” Bartal said.

Using fiber photometry, immunohistochemistry, calcium imaging, and other diagnostic tools, researchers found that all the rats they studied experienced empathy in response to another rat’s signs of distress.

However, to act on that empathy, the helper rat’s neural reward circuitry had to be triggered, and that only occurred if the trapped rat was of the same type as the helper rat, or member of its in-group.

Specifically, the rats’ empathy correlated with the brain’s sensory and orbitofrontal regions, as well as with the anterior insula. Meanwhile, the rodents’ decision to help was linked to activity in the nucleus accumbens, a reward center with neurotransmitters that include dopamine and serotonin.

For the study, more than 60 pairs of caged rats were monitored over the course of two weeks. Some of the pairs were of the same strain or genetic tribe, while others were not. In each trial, one rat would be trapped inside a transparent cylinder while the other roamed free in a larger enclosure surrounding the cylinder.

While unconstrained rats consistently signaled empathy in response to the plight of trapped rats, they only worked to free those that were part of their in-group, in which case they would lean or butt their heads against the cage door to release the rat.

Indeed, in reviewing the results of multiple measures to understand the neural roots of that bias, the research team found that while all the rodents in the trials sensed their cage partner’s distress, their brains’ reward circuitry was only activated when they came to the rescue of a member of their in-group.

Moreover, humans and other mammals share virtually the same empathy and reward regions in the brain, implying that we may have similar biases toward our in-group when it comes to helping others, Bartal noted.

“Overall, the findings suggest that empathy alone doesn’t predict helping behavior, and that’s really a crucial point,” she said. “So, if you want to motivate people to help others who are suffering, it may be that you have to increase their feeling of belonging and group membership, and work toward a common identity.”

“Encouragingly,” she added, “we find that this mechanism is very flexible and determined primarily by social experience. We will now try to understand how prosocial motivation shifts when rats become friends, and how that is reflected in their brain activity.”