Anyone who’s kept up with the latest and greatest about the cognitive, emotional, and moral lives of nonhuman animals knows surprises are being uncovered almost daily, and that many non-primate animals are showing intellectual and emotional capacities that rival those of the great apes. Some fascinating new results about empathy in laboratory rats caution against our tooting our “we’re so special” horn too loudly or proudly.

Over the past few years we’ve learned much about the moral lives of animals. Detailed studies have shown that mice and chickens display empathy—and now we know rats do, too. 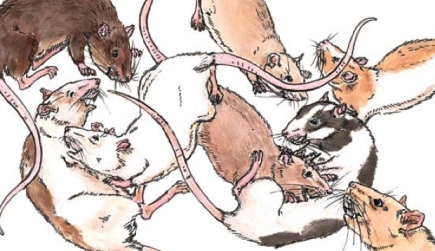 A study published recently has provided the first evidence of empathy-driven behavior in rodents. Appearing in the prestigious journal Science, the results of this landmark study show that untrained laboratory rats will free restrained companions, and this helping is triggered by empathy. The rats studied would even free other rats rather than selfishly feast on chocolate. “That was very compelling,” says study researcher Peggy Mason notes. “It said to us that essentially helping their cagemate is on a par with chocolate. He can hog the entire chocolate stash if he wanted to, and he does not. We were shocked.”

A press release from the University of Chicago accompanied by a video reads as follows:

The observation, published today in Science, places the origin of pro-social helping behavior earlier in the evolutionary tree than previously thought. Though empathetic behavior has been observed anecdotally in non-human primates and other wild species, the concept had not previously been observed in rodents in a laboratory setting… ‘This is the first evidence of helping behavior triggered by empathy in rats,’ said Jean Decety, PhD, Irving B. Harris Professor of Psychology and Psychiatry at the University of Chicago… ‘There are a lot of ideas in the literature showing that empathy is not unique to humans, and it has been well demonstrated in apes, but in rodents it was not very clear. We put together in one series of experiments evidence of helping behavior based on empathy in rodents, and that’s really the first time it’s been seen.’

It’s also very interesting that the rats were not trained to open the cage door. Inbal Ben-Ami Bartal noted. “These rats are learning because they are motivated by something internal. We’re not showing them how to open the door, they don’t get any previous exposure on opening the door, and it’s hard to open the door. But they keep trying and trying, and it eventually works.”

It’s also important to note that the rats in the cage didn’t have to experience unbearable physical pain for other rats to help them. In the earlier study in mice researchers caused a lot of excruciating pain. As such, this new study on rats sets a wonderful precedent for future research on sentient and empathic animals. It’s also safe to assume that numerous animals display empathy based on what we already know. As Jean Decety concludes in a very important paper on the evolution of empathy:

There is strong evidence that empathy has deep evolutionary, biochemical, and neurological underpinnings. Even the most advanced forms of empathy in humans are built on more basic forms and remain connected to core mechanisms associated with affective communication, social attachment, and parental care.

There’s also another very important aspect to this study. Much research is showing that human and nonhuman animals are inherently compassionate and empathic and that it’s really easy to expand our compassion footprint. Thus, the comments of Peggy Mason ring true: “When we act without empathy we are acting against our biological inheritance… If humans would listen and act on their biological inheritance more often, we’d be better off.”

We can only hope these findings will be used to protect rats and other rodents from being used in horrific invasive research. Although it’s been known for more than five years that mice display empathy this has not been factored into a revision of the Federal Animal Welfare Act in the United States. Rodents and many millions of other animals who comprise more than 99 percent of the animals used in invasive research can still be greatly harmed or killed “in the name of science.” Indeed, the Animal Welfare Act does not consider them to be “animals.” Only about one percent of animals used in research in the United States are protected by legislation and the legislation is sometimes amended in nonsensical ways to accommodate the “needs” of researchers.

The desperation of science to rob animals of their sentience produces distortions that open the door for egregious and reprehensible abuse. For instance, here is a quote from the federal register:

We are amending the Animal Welfare Act (AWA) regulations to reflect an amendment to the Act’s definition of the term animal. The Farm Security and Rural Investment Act of 2002 amended the definition of animal to specifically exclude birds, rats of the genus Rattus, and mice of the genus Mus, bred for use in research. (Vol. 69, no. 108, 4 June 2004)

It may surprise you to learn that birds, rats, and mice are no longer considered animals, but that is the sort of logic that epitomizes federal legislators. Researchers are not allowed to abuse animals, so the definition of animal is simply revised until it refers only to creatures researchers don’t need. Garet Lahvis, a behavioral neuroscientist at Oregon Health & Science University in Portland, correctly notes, “We study animals to see what makes us uniquely human, but the findings of empathy in animals often force uncomfortable questions about how humans treat animals.”

All in all, discoveries like this demand that we keep an open mind on who other animals are and what they are capable of. As I and others have concluded time and time again, we need to debunk the myth of human exceptionalism once and for all. It’s a hollow, shallow, and self-serving perspective on who we are.

Here are further articles about this study
Empathy and Animals Magazine
News and Information about Empathy and
Compassion with, by and for Animals
http://scoop.it/t/empathy-and-animals

Great article. There is WAY too much emphasis on “compassion” when it comes to lab animals. I think we’ve seen and are going to see with weather changes, what our lack of respect means for us. We need to wake up and realize we are just another animal.

Why people, even scientists, were led to assume that animals had “no feelings and no emotions” before the topic was even studied, I’ll never know. Now behaviorists try to assign motivation to behavior, with little evidence. We can’t know what’s going on inside their heads unless we ask them.

Avian neuroscience is showing that birds are much more “aware” than what we had assumed, although I don’t know why it matters. Animals act according to their respective ecosystems and again, we should respect that.

Regarding the article: Do Rats Feel Empathy?

Here’s in a video interview I did with Marc Bekoff
asking him how we can build a culture of empathy
and compassion.
http://bit.ly/wGobDs

A short quote:
Edwin: I’m looking at How do we build a culture of
empathy and compassion in the largest sence? It
seems that looking at how do we have empathy
and compassion for animals is a part of that. Do
you have thoughts about How we can go about
building a culture of empathy?

Marc: I think about that a lot, in fact a book that I
just sent off that will be out next year called,
“Ignoring Nature No More: The Case for
Compassionate Conservation”. I see a lots of ways
that we can build a culture of empathy, and given
my own interests I see “Compassionate
Conservation” as being almost like a social
movement.  It’s acting like a collective, people
with common interests to pursue them and to
pursue them and act on their feelings of empathy,
if you will. It’s really hard to find people who don’t
empathize with animals or care about animals.
explain to people - show them by example how
empathy and compassion can be cased out in
terms of actions for animals….

I’m sorry, but I just can’t resist making a snarky comment. When even rats demonstrate more empathy than House Republicans, we need to revise our political terms of derision. How low on the evolutionary ladder do we need to descend to find a creature that cares only about itself, and will happily destroy its own kind in the pursuit of self-interest?

Then again, I suppose the right-wing - masters of propaganda that they are - could seize upon this new research and characterize anyone to the left of an outright plutocrat as a socialistic rat. Only man, the truly exceptional species (especially in the truly exceptional land of the USA), has evolved beyond the primitive socialism of lower creatures.

All joking aside, the obvious point missed by this article is the horrific treatment of our fellow creatures in industrialized agriculture. The agribusiness conglomerates have shielded consumers from any conscious awareness of the systemic cruelty they inflict upon sentient beings. Every supermarket’s meat and dairy section should be equipped with televisions displaying videos from PETA. Bon appetit.