The clock is ticking. There are two rats. One is free, the other is trapped in a plastic tube. The free one can save his comrade by pushing the tube open. But will he do it?

Prior research has found that he will indeed—it turns out that rats will help each other out of bondage, whether they are friends or strangers. But the rats in previous studies were of the same species and physically similar. 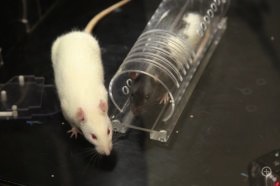 In a new study, a team of researchers at the University of Chicago used rats of two different strains (one albino and one with a black hood) to see if they would still help. The immediate results might be considered depressing: The rats did not help strangers of a different strain, suggesting that helping in rats may be innately biased towards the helper’s own group.

So are rats born racist? To find out, the researchers changed the conditions.

They first allowed the rats of two different strains to live together before one was put in the restraint. Familiarity made a difference: Not only did the rat help their friend of a different strain, but he also helped strangers of that same strain—a dynamic that in humans is called the “contact hypothesis.” Just as with humans, it seems that contact between groups of rats increases the likelihood that members will help other groups out, even when they look very different from each other.

The researchers also found that genetics has nothing to do with it—it’s who raised you. In the final condition, the researchers placed newborn albino rats with those of a different strain. When they placed those “ugly ducklings” in the cage as adults, they did not initially help the “beautiful swans” of their own strain. The rats only helped the rats of the strain that they were brought up with.

Together, this research indicates that social context matters much more to rats than physical appearance when they decide who to help. In fact, genetics and physical appearance made no difference at all. Rats helped others, similar or different, only if they had previously lived with a member of that strain.

So what does this tell us? It is hard to ignore the parallel between this research and research into human intergroup relations, which finds that contact, under the right conditions, helps people to overcome prejudice.

“Exposure to and interaction with different types of individuals motivates them to act well toward others that may or may not look like them,” says neurobiologist and co-author Peggy Mason. “I think these results have a lot to say about human society.”